Here are the top 54 places to visit in Tamil Nadu:

Rameshwaram is one of the holiest places and is located on a beautiful island.

Nestled in the Eastern Ghats, Yercaud is a hill station called poor man's Ooty with abundant forests, vast coffee plantations and some unique species of flora and fauna resulting in gorgeous views.

Kodaikanal is the most sought after honeymoon destination in South India because of its scenic beauty and it has the attribute to leave any nature lover mesmerized by its charisma.

Best Time: September to May

Ooty, the queen of hill stations and the capital of Nilgiris district, is one of the most popular tourist destination, especially as a honeymoon destination.

The fourth largest city of India, Chennai is convoluted with temples, churches and beaches. The roads are always bustling with activity and the nightlife is as every youth dreams of.

Situated in the union territory of Pondicherry, this township is wholly and solely based on the principles of peace, harmony, sustainable living and 'divine consciousness' which was the brainchild of the Mother of Sri Aurobindo Society, Mirra Alfassa.

Hogenakkal is the small village that is known because of Kaveri river that splits into multiple streams of waterfalls over here, making it arguably the most heavenly place in the state.

Located at the southernmost part of India, Kanyakumari with its beautiful beaches, Vivekananda Memorial and the perfect sunset is one of the most exotic places to go in India.

Widely known for its 'Kanchipuram sarees' and also referred to as the 'golden city of thousand temples', Kanchipuram has various temples of religious and cultural importance spread all over the city.

Best Time: October to May

Hill Stations in Tamil Nadu To Beat The Heat

National Parks in Tamil Nadu For A Thrilling Wildlife Adventure

Beaches of Tamil Nadu For A Perfect Beachside Vacation

Historical Places in Tamilnadu For A Truly Heritage Circuit

Surreal Waterfalls in Tamil Nadu for a Peaceful Short Trip

Madurai is one of the oldest cities of India and was ruled by Pandya kings over most of its history. Known as the 'Lotus city',  this is known as the cultural capital of Tamil Nadu.

Often termed as ‘Manchester of South India’, the city is photographically situated on the banks of River Noyyal and has an array of natural attractions.

Also known as Tanjore or the city of temples, Thanjavur has a lot of cultural value and is known for its famous Tanjore paintings, antiques and handicrafts, its Carnatic music and musical instruments and of course the temples.

Tirunelveli is a big city in the midst of numerous small towns, each with its own bounty of beautiful sights, temples, waterfalls and much more.

Placed on the Nilgiri hills, Mudumalai is largely popular because of its national park which has some exotic varieties of flora and fauna and the scenic landscapes.

Perched on top of the Malai hill, Thiruvannamali is a holy town, most famous for its Arunachala temple among numerous other temples and ashrams dedicated to saints of olden times.

One of the most beautiful and serene hill stations you will come across in the country, Coonoor is the second largest hill station in the wonderful Nilgiri Hills of the Western Ghats.

On the Coromandel coast, 165 kilometers south of Chennai in the district of Nagapattinam, it is said that years ago, the Virgin mother came to bless the land.

Dhanushkodi, a small, sparsely populated town on the coast of Tamil Nadu is one of the most unique and unusual beach town in India.

Tuticorin is a beach town, also one of the busiest ports, has a wildlife sanctuary, houses numerous temples and churches and tens of other monumental sites. If this does not make it to you radar, then nothing else would.

Yelagiri is small hill station, in the Vellore district of Tamil Nadu. If your looking for a hill station out of the ordinary, then you need to make your way to Tamil Nadu!

Kumbakonam is a gorgeous temple town in the heart of the Thanjavur district of Tamil Nadu.

Chettinad is often touted as a temple town, but it is one of those holiday getaways where you will be glad you are burning all those calories from all the walking- It has mouth watering cuisines!

Trichy is a mid sized, fat emerging city in Tamil nadu. It is a refreshing change from cities that are either completely devoted to a religion and cities that are nothing but concrete jungles.

A beautiful temple town in the eastern part of Tamil Nadu, Chidambaram is famous for housing the marvelous Lord Nataraja Temple and a few others which highlight its importance as a special place of pilgrim.

Nagapattinam is a town on the coastline of Bay of Bengal with major historical significance which is also a renowned pilgrim center with many temples, churches and mosques spread all over.

Lying close to the important district of Mahabalipuram, is Vedanthangal, best known for its bird sanctuary.

Forgotten to be touched by time, and still known for its tranquility, is Tharagambadi, otherwise known as Tranquebar- The land of the singing waves.

Kutrallam is a perfect getaway for those who want to be connected with nature and get lost in the penchant of spirituality.

Bellikkal is one of those places where you can completely relax, without having to worry about a 'to-do' list for your vacations and yet experience mountains that will steal your breath away.

An ancient city in the northeastern part of Tamil Nadu, Vellore is located on the banks of river Palar Vellore. The land of Vellore has seen glorious days of many empires such as the Pallavas, the Cholas, the Vijayanagara, the Rashtrakuta, the Carnatic and the British.

Salem may be the fifth largest city in Tamil Nadu in terms of its area but is largest when it comes to breathtaking natural beauty and tranquil holy shrines. The city also houses several noteworthy mosques and churches.

The mighty Western Ghats fringes the beautiful hamlet of Theni. It is dotted by luscious patches of greenery and gushing waterfalls wherever you go. The town of Theni offers unprecedented serenity and peace.

Located down south, in Coimbatore, Tamil Nadu, the town of Pollachi is a popular filming spot due to its lavish greenery and blissful sceneries. Primarily an agricultural region, Pollachi adorns vast spreads of coconut, jaggery and vegetable fields.

The city of Yanam is situated in the Yanam district of Puducherry, India. The small city which covers an area of 30 square kilometers is in the confluence where Godhavari meets Koringa to the south of Kakinada district in Andhra Pradesh.

With an ominous name which means ‘Mountain of Death’, Kolli Hills or Kolli Malai are a mountain range located in the Namakkal district of Tamil Nadu. It is relatively untouched by commercial tourism and therefore has retained most of its natural magnificence.

Right between the 200km distance from Coimbatore and Madurai lies the hilly town of Palani. The town has two hills, Sivagiri and Sakthigiri, that are the prominent visual in this scenic, hilly landscape.

Tenkasi is the second largest town of the Tirunelveli District, Tamil Nadu. Amidst the Western Ghats, River Chittar flows through this picturesque destination favoured amongst tourists. This town is known for waterfalls and temples, specially Courtallam Falls and Kasi Viswanathar Temple.

Dindigul is a historical city and administrative centre for Dindigul District, Tamil Nadu. Situated between the Palani and Sirumalai hills, this city is not particularly known for its terrain but for its history. The Dindigul Fort is the main attraction here while their biryani is very famous.

Located about 57.3 km from Nagapattinam, Mayiladuthurai is a temple town that's famous for it's Shiva temple known as Mayura Natha Swamy temple. With Dravidian architectural excellence spread all over in Mayiladuthurai, Kornad clothes further extract out the uniqueness that Mayiladuthurai inherits.

Thiruvavur, also written as Tiruvarur, is a municipality town nestled in Tamil Nadu, India. Famed for its antiquity, the town has been ruled by multiple groups at varied times including Medieval Cholas, Later Cholas, Vijayanagar Empire, Later Pandyas, Marathas, and the British.

7 Festivals of Tamil Nadu You Should Know About And Experience !

Culture And Traditions Of Tamil Nadu

National Parks in Tamil Nadu For A Thrilling Wildlife Adventure

Hill Stations in Tamil Nadu To Beat The Heat

Beaches of Tamil Nadu For A Perfect Beachside Vacation

Surreal Waterfalls in Tamil Nadu for a Peaceful Short Trip 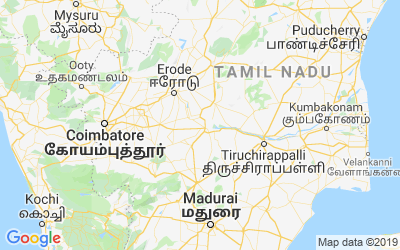