Plan Your Trip To Andhra Pradesh

Blessed with two beautiful rivers, Krishna and Godavari, Andhra Pradesh has the Bay of Bengal to its west, and it boasts of a coastline of 972km, the longest in the country. This state is widely advertised as the Kohinoor of India by the tourism department. The state is most visited for its world famous Tirupati temple. Srisailam Mallikarjuneswar temple is another famous Shiva shrine and is one of the 12 Jyotirlinga temples in India.

In spite of the recent division of the state of Andhra Pradesh, which resulted in the formation Seemandhra which is what was left of Andhra Pradesh after Telangana region was carved out, Seemandhra seems to have got the better share regarding tourism. Places like Belum caves, Nagarjuna Konda, Borra caves and Pulicat Lake have all come under Seemandhra. Apart from this, it retains the better part of the culture and cuisine of Andhra Pradesh and has an already established tourism development. The state is home to various centres that have quite a lot of Buddhist influence like Dhulikatta, Bavikonda, Thotlakonda, Amravati, Nagarjuna Konda, etc.

The Vijayanagara dynasty can be credited for constructing some breathtaking structures in the state like Srisailam and Lepakshi temples. One of the famous mosques in the state is the Shahi Jamia Masjid in Adoni of Kurnool district. Rajahmundry city, located on the banks of Godavari River is one of the main attractions of the city. Likewise, Kolleru Lake is one of the largest freshwater lakes in India located in the state of Andhra Pradesh. A trip to this state will leave you completely mesmerised.

View All Places To Visit In Andhra Pradesh

National Parks in Andhra Pradesh For A Wild Adventure

Must-visit Temples in Andhra Pradesh for a Divine Pilgrimage

View All Posts About Andhra Pradesh

What are the major festivals celebrated in Andhra Pradesh?

A blend of the state's culture, history and traditions, the festivals of Andhra Pradesh are quite exciting. Deccan Festival- A five-day event held in Hyderabad every year is a cultural festival. There are Ghazal nights and nights of qawwalis and mushairas that reflect the rich tradition of Hyderabad. Lumbini Festival- It is held every year in Nagarjunasagar in Hyderabad to relive the heritage of Buddhism in the state. Maha Shivratri Festival- This is celebrated in different ways in different parts of India. In Andhra Pradesh, pilgrims go to Kalahasti and Srisailam to visit the temples there. A strict fast is observed throughout the day, and Lord Shiva is bathed with milk, curd or honey. Pongal- It is one of the major festivals of South India. Pongal is celebrated every year to mark the movement of the sun towards the north and to mark the time for harvest. In this four-day event, cows are adorned with ornaments are taken out in processions. Ugadi Festival- This festival marks the beginning of Hindu Lunar calendar. It is the festival to rejoice the coming of new year. Pooja is performed in households, houses are decorated, and new clothes are worn.

What are the popular handicrafts of Andhra Pradesh?

Some of the famous art forms and crafts of Andhra Pradesh are-
Banjara Embroidery- 'Banjara' means 'nomads'. People belonging to this community stitch some magnificent pieces of cloth studded with impressive mirror work making the clothes the most exuberant part of their craft culture. Kalamkari and Block Printed Fabrics- Kalamkari is the art of painting on fabrics using a pen. This started with designs of religious importance such as images of Gods and scenes from mythology. The main areas in Andhra Pradesh where Kalamkari is done are Machilipatnam and Srikalahasti. Wood carvings- Wood Carving is among the most complex forms of arts and crafts. There are no specific areas in Andhra Pradesh that are famous for wood carvings. You will find these items in all parts of the state. Hyderabad Pearls- There are different types of pearls which are distinguished according to their shape and luster. The pearls are then used in various ornaments like bracelets, necklaces, earrings, rings, etc.

What is the traditional dress of Andhra Pradesh?

When it comes to traditional attire, women including those belonging to Muslim community, generally wear sarees. Salwar Kameez is also worn on regular days. Kalamkari sarees, Kurtis, salwar-kameez, have become the popular costumes of Andhra Pradesh. Tribal women of communities like Lambadi, Banjara, Sugalis etc. wear heavy skirts made up of stones, beads and mirrors. Men of the state wear the most common attire of India, dhoti and kurta. The Muslims, in general, wear pyjamas instead.

What is the traditional dance and music of Andhra Pradesh?

Both men and women of the state perform the classical dance. However, women tend to learn it more often. Kuchipudi is the state's best-known classical dance forms. The various dance forms that existed through the state's history are Chenchu Bhagotam, Kuchipudi, Bhamakalapam, Burrakatha, Veeranatyam, Butta bommalu, Dappu, Tappeta Gullu, Dhimsa, and Kolattam. The state has a rich musical heritage. Many legends of the Carnatic music including Thyagaraja and Syama Sastri were of Telugu descent. Other composers include Annamacharya, Kshetrayya, and Bhadrachala Ramadasu.

What is the history of Andhra Pradesh?

Andhra Pradesh's history dates back to the Vedic period. There is evidence that the coastal kingdom of Andhra Pradesh was quite flourishing during the Satavahana Period. After the fall of the Satavahana Empire, the Ikshvakus of Nagarjunakonda came into power. Under this empire, Buddhism flourished.

Andhra was also under the control of the Kakatiya Dynasty, the Reddy Dynasty, the Vijayanagar Empire and the Mughal rule. In 1792, the British took over this area. Post-Independence, Andhra state was merged with the Telugu-speaking area of Telangana and Andhra Pradesh was created in 1965. Soon after the Telangana Movement, the Telangana state was separated.

What is the landscape of Andhra Pradesh?

Two main rivers, Godavari and Krishna flow through the state. It also includes the eastern part of Deccan Plateau and some part of Eastern Ghats. Andhra Pradesh can be divided into two regions-Coastal Andhra and Rayalaseema. There is a total of 13 districts in the state.

Have a Question on Andhra Pradesh? 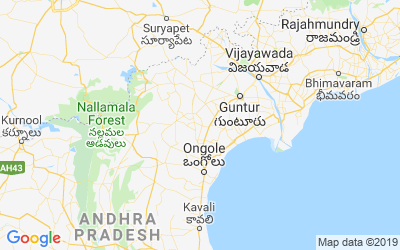