Indian food is a beautiful amalgamation of the culture and diversity that is part of the country. When you think about the Indian cuisine, you think about the rich flavours, the mouth-watering and eye-watering spices, the delightful sweetness of our mithais and the fine aromas.

But there are dishes that will leave you surprised because it is far from the regular Indian food scenario. Some of these dishes might even give Bear Grylls a run for his money!

This dish is popular with the Jaintia tribe of the North East, predominantly Meghalaya. It consists of rice being cooked with the blood and entrails of either pigs or chicken. It is like your regular Pulav, but with blood and intestines. 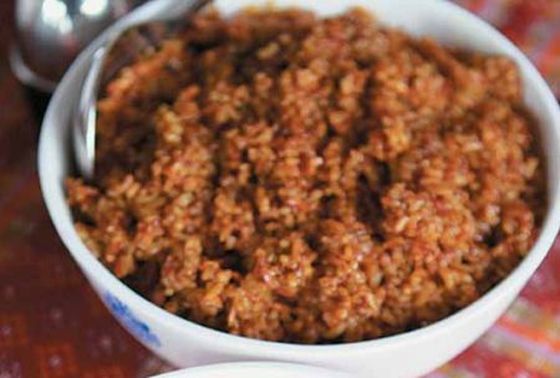 A modified version of Pulav (Source)

Another one is from Meghalaya makes it to the list. If you’ve ever had pork and onion salad, this is very similar to that. But of course, there is a catch here. It’s the garnishing it comes with. This delicacy is garnished with steamed pig brain; yes you read that right. Pig Brain, anyone? 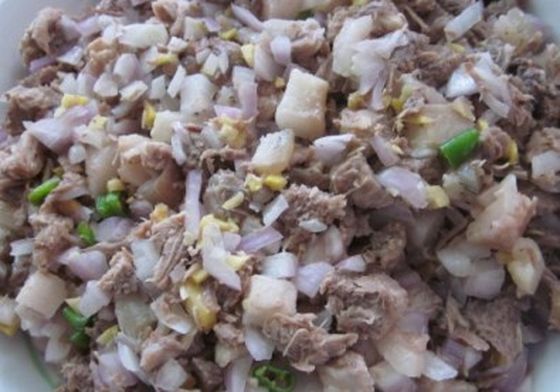 Dieting? Go have some of this salad! (Source)

All you dog lovers can stay away from this one! Though unheard of in rest of the country, Nagaland has delicacies that include dogs, spiders, pork, beef, crabs and even elephants. Dog meat prepared in different ways and is a favourite amongst the tribal communities of Nagaland, Mizoram and Manipur. 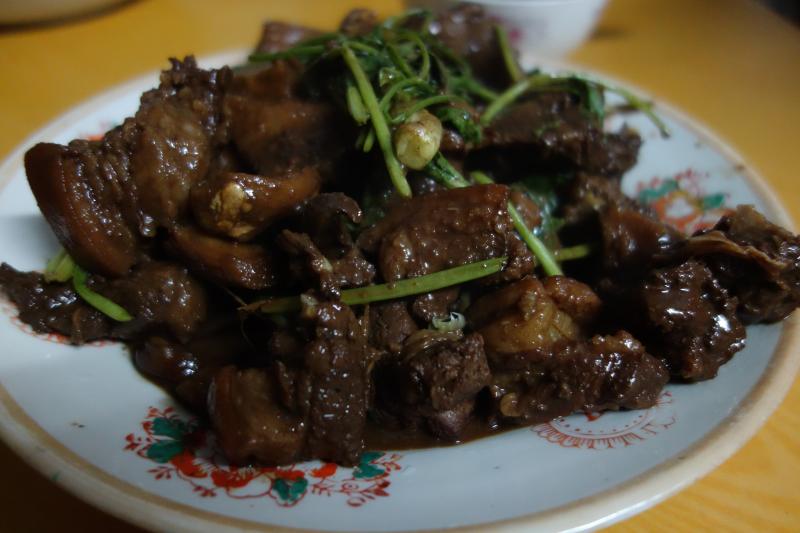 Red ants, their eggs and some spices; how does that sound to you? Maybe it repels you, or maybe it makes you curious. But the tribes in Chhatisgarh swear by the pungent and spicy chutney of the red ants. They even use red ants for garnishing. Let’s all go try out some ants! 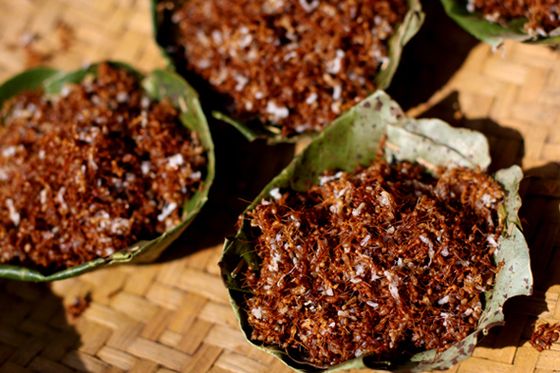 Who knew we could cook even ants? (Source)

This one was a complete surprise to me. If you’re in Goa, you’ll find that this is a star dish of the Goan cuisine. Just think of it like any other fish, really. Since it’s very difficult to catch and also very well-loved by the locals, this is one curry that won’t come for cheap. Who is afraid of sharks, anymore?

This exotic delicacy is part of the Goan and Sikkim cuisines. The battered and fried frog legs are considered to be of great medicinal value by the Lepchas community in Sikkim. It is known to have cured dysentery and other stomach ailments. And, no; you won’t start jumping like frogs after eating it. 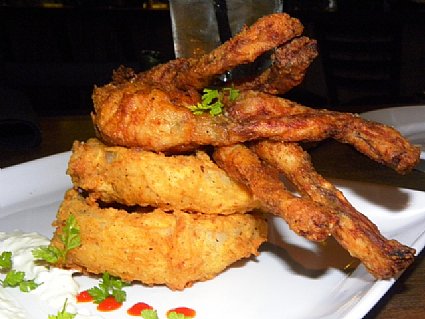 This frog won’t turn into a prince (Source)

Love that new silk saree you bought? Well, thank the silkworms! But that’s not all that they can give you. Here in Assam, silkworm pupae are a much loved delicacy. The Eri silkworm is used after it has spun its cocoon. It is usually served with Khorisa, a dish prepared from fermented bamboo shoots. 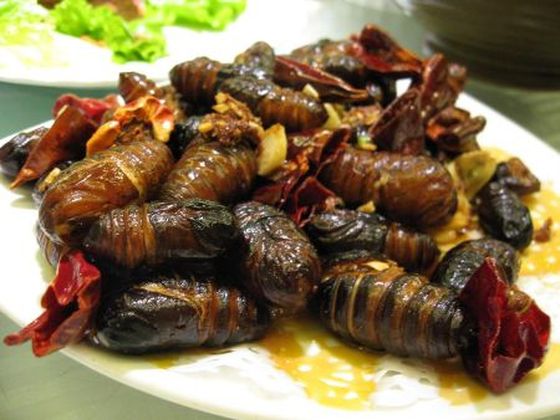 Even silkworms are edible! :O (Source)

You vegetarians probably didn’t expect any vegetarian dishes here. Well, (un)fortunately, there is! Potatoes are part of the staple diet for majority of the Indians. It’s the same with this that is part of the regular North East Indian cuisine. Except that the potatoes are rotten. Ask them why and they’ll tell you how delicious it is. They have no qualms about it eating it raw or cooking it like any other vegetable. 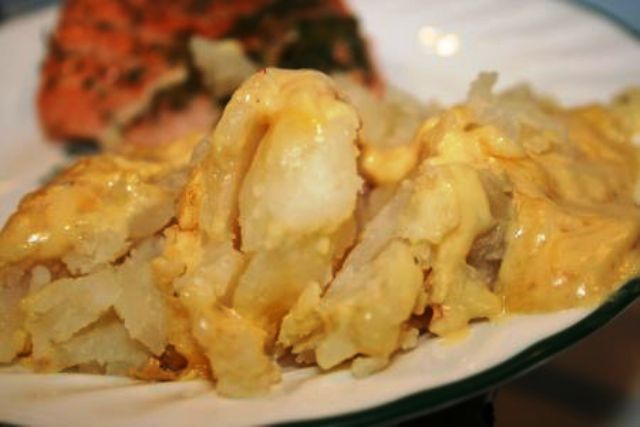 This dish is a favourite amongst members of Meghalaya’s Garo tribe. This delicacy is made from dried fish, vegetables (if you want any) and distilled ashes. Yes, the same one you get from burning something. It apparently tastes delicious. The only problem is the smell – it smells rotten. 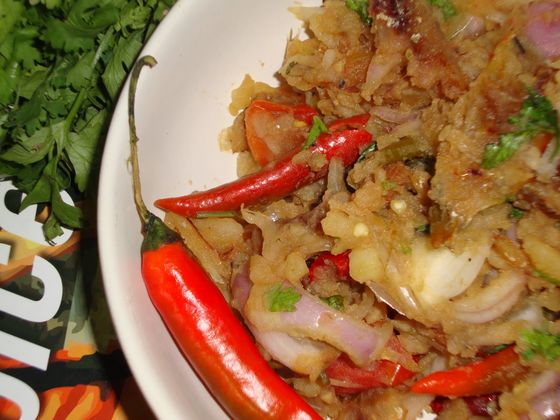 Doesn’t look all that bad, does it? (Source)

If you haven’t had enough of pigs yet, here is another Goan delicacy that you can try out. Like many of the delicacies in Goa, this dish has Portugese written all over it. Sorpotel is made with pork offal. In simpler words, it is made of a pig’s internal organs and entrails that would otherwise be treated as waste. 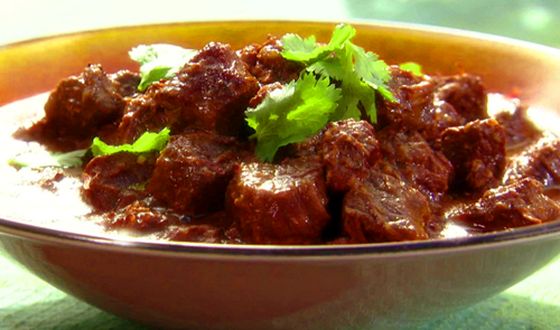 If you’ve tasted any of the above dishes, do let me know. For the one’s who haven’t, go get adventurous! I dare you  :-P

A Literature and Media post graduate, Deepika Singhania is a freelance writer, editor and a hardcore feminist. She is an avid reader and a football enthusiast, who loves cooking and travelling along with having a strong affinity for chocolates, Harry Potter and the Bangalore rains. In her free time, she writes for Holidify, the Highest Rated Travel App in India.