Read more about Airports in Assam

Plan Your Trip To Assam

"The Gateway to North-East India"

Assam, in North East India, is a treasure trove of natural beauty and diverse history, remaining as one of the most bountiful untouched regions in the country. Known as the land of 'Blue Hills and Red River', the state is home to wild forests, mighty rivers, and acres and acres of tea plantations. Popularly known as the home to the one-horned rhino, the state is one of the top biodiversity hotspots in the entire world. With the majestic Brahmaputra river, magnificent hills, rich flora and fauna, the state is every tourist's paradise. One of the most beautiful states of India, Assam is the gateway to the enchanting and unexploited northeastern part of the country.

A veritable paradise, Assam shares international borders with both Bangladesh and Bhutan and boasts of its vibrant culture and scenic beauty, as well as its historical significance. The state enjoys a climate similar to tropical regions and has evergreen vegetation throughout the year.

Guwahati, the largest city, known as the city of temples, is home to Maa Kamakhya Devi Temple, one of the most sacred temples for Hindus. Another beautiful highlight of the state is Majuli, which is the largest river island in the world and is famous for its vibrant Assamese neo-Vaishnavite culture. Further up north, located near the Dibru river, is Dibrugarh city, known as the Tea City of India.

Hajo, an extremely ancient pilgrimage centre for not one or two but three different religions, stands as a beautiful example of the secular diversity that exists in India. The area is dotted with numerous temples, mosques and churches, and other religious and sacred artefacts. Haflong, Assam’s only hill station, is a stunningly beautiful place, marked with rolling mountains and lush green valleys.

Top Places to Visit In Assam

View All Places To Visit In Assam

Dresses of Assam - A Sneak Peak Into Traditional Assamese Costumes

Historical Places in Assam For A Stunning Heritage Tour

8 Vibrant and Colourful Festivals of Assam

National Parks Of Assam For A Once In A Lifetime Experience

View All Posts About Assam

Assam is a getaway suited to families, friends and solo travellers. The local people are friendly and a plethora of experiences await those who visit the state.

Why is Brahmaputra called 'The Soul of Assam'?

Flowing through most regions of Assam, the Brahmaputra river is more than just a geographical entity. It has integrated into the culture and society of Assam. On its bank, all the major cities of Assam thrive and provide livelihoods to thousands of people. The river also nurtures the vast amount of forests in the state that are teeming with wildlife. The river has been at the centre of art, culture, folklore and literature for its aggressive temperament during the monsoons. Today, it has become an important part of the tourism industry, and many cruises operate along the river.

What are the types of traditional handicraft found in Assam?

Assamese traditional crafts encompass a wide variety across the region and reflect the local cultural influences that have evolved over time. Assam is famous for its wood, cane and bamboo crafts, pottery, handlooms, jewellery and colourful masks. The most famous crafts are undoubtedly the bamboo and cane products, but other crafts like woodwork are also very famous. The metal crafts in the form of articles of worship as well as household items have made Assam a favourite destination for those who want to add a touch of rusticity to their homes. The tribal masks and traditional painting styles reflect the massive tribal influence on the lifestyle of the people as well as the thriving tribal culture that still forms an integral part of the state. Weaving is the traditional art of the Assamese.

What are the major festivals celebrated in Assam?

Like all other North-Eastern states, festivities form the core of Assamese life, and this state has no dearth of festivals. The most famous, Bihu, is related to the agricultural cycle and is celebrated three times a year to correspond to various harvest and planting seasons. Rongali Bihu, Kaati Bihu and Magh Bihu are the three festivals celebrated by different communities in their distinctive way with dances and rituals. The Ambubachi Mela held at the Maa Kamakhya temple, Ali-ai-Ligang and Jonbil Mela are other major religious and cultural festivals of Assam.

Which animals are found in Assam?

Because of its geographical diversity, Assam is one of the leading biodiversity hotspots in the world. It has many different ecosystems like rainforests, grasslands, bamboo orchards, wetlands and marshes. Most of these biodiverse regions are now protected as wildlife sanctuaries and national parks and are open to tourists except during the monsoon seasons. Many rare species of animals and birds like the Golden Langur, the One-Horned Rhino and a variety of hornbills, amphibians and vultures are found in these forests. The Kaziranga National Park and Manas National Park have been declared as UNESCO World Heritage Sites.

How are the local people of Assam?

The people of the Assam are extremely friendly. They belong to different tribes and communities. Keeping in sync with the picturesque landscapes and the colourful customs, the people of Assam are a perfect example of unity in diversity. The state has the largest number of tribes within their variety in tradition, culture, dresses, and exotic way of life. The major languages spoken in Assam is Assamese or Axomia and Bodo. Down south in the Barak Valley region, the major language spoken is Bengali. The major religions of Assam are Christianity, Hinduism, Sikhism, Islam and Buddhism. From ancient times, artists and sculptors, masons and architects, and others craftsmen such as weavers, potters, goldsmiths, artisans working with ivory, wood, bamboo, cane and rawhide have all flourished in Assam.

What is the history of Assam?

The ancient history of Assam shows consistency with contemporary events in mainland India and has been clearly documented since the 1st century AD. It was known as Kamarupa and ruled by subsidiaries of North Indian rulers. The 13th century saw invasions from the North and East by Delhi-based Islamic rulers and the Chinese army.

The Ahoms ruled Assam at the time when Mughals were presiding over the rest of India and were deposed by the advent of the British in 1826. After independence, few parts of Assam became part of East Pakistan (Now Bangladesh) and the present day state of Assam was formed in 1962 as various states of the Northeast were carved out of it.

What is the landscape of Assam?

The beautiful state of Assam is located in the North Eastern part of India and borders West Bengal. It shares an international boundary with Bangladesh and Bhutan and has a hilly terrain. A large area of Assam is naturally irrigated by the two major rivers - Brahmaputra and Barak and the hills of the Barail range run between these two valleys. Known around the world for its fragrant variety of tea, Assam is one of the biggest homes to a majority of India's tea gardens. Guwahati is the largest city and serves as the connection between the North Eastern states and mainland India. Dispur, Jorhat, Tezpur and Dhubri are some of the other main cities in the state.

Have a Question on Assam?

Popular Questions And Answers on Assam

Q. Best time to visit or which time of the year is good to visit Assam?

4 years ago
Add Your Answer

Q. Hello, We are planning to go Brahmaputra Pushkaram which will be in March of 2019, We want to see places in and around Assam for 5 or 6days and to go Nepal from there ... please help me out in this regard ... 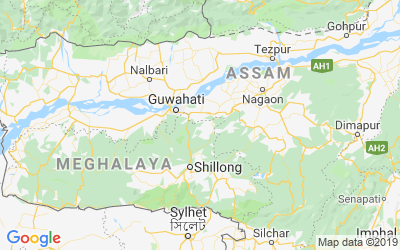