I had often heard stories of Sikh benevolence from my friends who visited Gurdwaras. These friends were not just Punjabi Sikhs but also Bengali students who looked forward to the free langar in Rome when they found Italian restaurants a tad too heavy on their pockets.

I first visited a Gurdwara last winter on my trip to New Delhi. Delhi was just a stopover destination on that trip and I did not intend to do much sightseeing in the capital. While I scrolled through Foursquare for suggestions of good eateries in the city, I came across Gurdwara Bangla Sahib. I was surprised to see a house of worship on a list that otherwise only had restaurants and cafes. Instantaneously, I decided to visit the Gurdwara. This was my chance to unravel a mystery I was often fascinated with as a child. 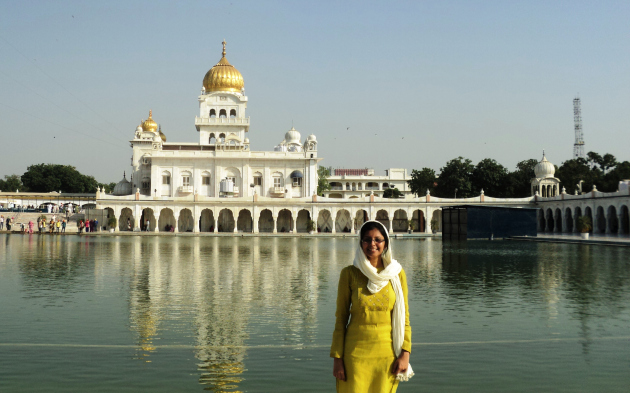 Gurdwara Bangla Sahib is a palatial structure built of white marble with gold finishings. Four of its largest domes are wrapped in gold and exude the brilliance of the sun in the daytime. I learnt later that this opulent edifice was indeed a palace four hundred years ago – the abode of Raja Jai Singh. 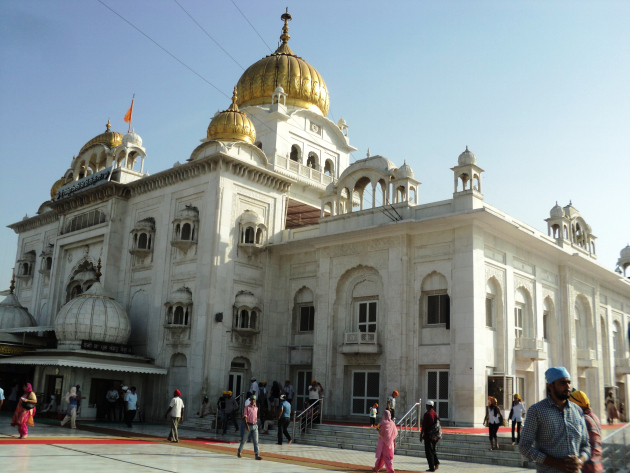 The Gurdwara experience is quite an interesting one, especially for first timers. There is a sequence to how you proceed once you are inside a Sikh house of worship:-

Step One – Deposit Your Bags at the Luggage Counter

Step Two – Deposit Your Shoes at the Shoe Counter

In India, most places of worship will require that you remove your shoes. It is the same with Gurdwaras. Guru Bangla Sahib has several counters for devotees to hand over their shoes for safekeeping. Remember to collect your token and keep it safely. Your shoes will be handed back against the token.

It is mandatory for everyone to cover their head inside a Gurdwara. Women generally wrap a dupatta over their head and men are expected to knot a headscarf to cover their forehead. You will usually find baskets of reusable headscarves which look like large handkerchieves in various colours and prints. Be mindful of this custom. Your headscarf or dupatta must never slip off as that is considered disrespectful. If it does, the volunteers point it out to you.

Washing your feet is an important step before you climb the stairs to the Gurdwara. I thought it was particularly intelligent of the builders to place a shallow water-tank right at the foot of the staircase.

Guru Bangla Sahib has a structured way of accepting sponsorship for prasad (holy food). Prasad is usually a halwa – a sweet dish. You can buy a coupon for a nominal price and hand it over to the Gurdwara-worker designated to collect it. This step is optional, so those who cannot afford to pay can just skip this one. I suggest that you buy prasad if you have a big heart. Gurdwaras work mostly on charity and do a lot more charity in return!

There are queues for everything inside a Gurdwara and the proceedings are highly organised. After you collect your prasad-coupon, you exchange it for a bowl of prasad. But you cannot eat it just yet!

This step is perhaps the highlight of my Gurdwara experience. There are two queues right outside the main building – one for those who have bought prasad, and another for those who haven’t. If you are in the first queue, you are supposed to hand your prasad-bowl to the Gurdwara worker. He scoops half of your prasad off your bowl and transfers it to a large drum of prasad (collected from more devotees like you). You take your half-filled bowl back and enter the building.

The people in the second queue (who come empty handed) are given a bowl of prasad from the same drum. This ritual brought tears in my eyes. Never before had I seen such a beautiful and structured way of sharing food. If only we could emulate this technique in our daily lives! This would solve the problems of hunger and poverty in the world. 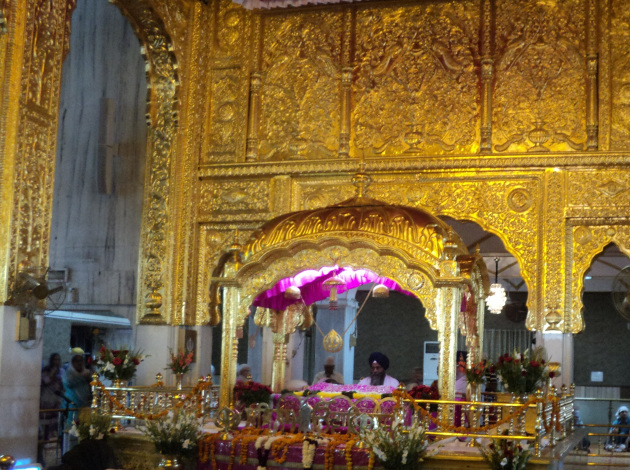 At the centre of the gilded shrine, the Granthi reads the Sikh scripture

Step Seven – Listen to the Granthi

The interiors of Gurdwara Bangla Sahib is even more grandiose than its exterior. The central place of worship gleams in its gold coloured carvings. The hall is large and peaceful with a high ceiling. The Granthi sits at the centre and sings prayers into the mic or reads the Guru Granth Sahib, the holy book for Sikhs. I am told that the Granthi in Sikhism is unlike a priest as in other religions. He has the same status as any other person visiting a Gurdwara. Anybody can be a Granthi and Granthis keep changing. This is a strong lesson in equality ingrained in Sikhism.

Hundreds of devotees either stand outside the railings that surround the Granthi’s pedestal, listening to the prayers, or sit under one of several hanging fans. The floor is either carpeted or there is cool marble to sit on. There is a separate seating area with chairs and sofas for the aged and those with problems of arthritis or mobility. 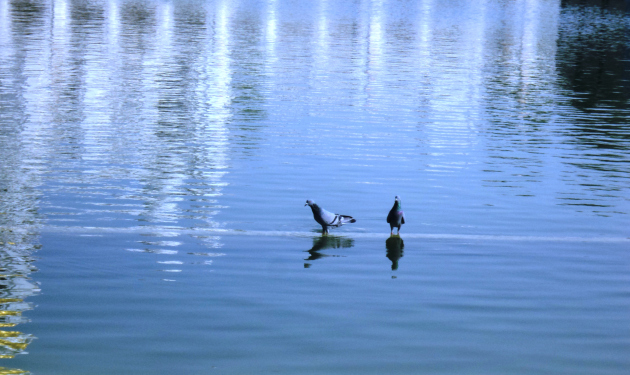 I watched a pair of pigeons quench their thirst from the Gurdwara-pond as I sat in the courtyard, quenching my thirst for peace.

You can either finish your prasad inside the main building or carry it outside into the expansive courtyard. I found me a nice shaded area on the white marble to sit on. The suji-ka-halwa, a semolina preparation, is the best I have had till date. Perhaps because it is generously swathed in ghee, or maybe because it is made with love…

The courtyard borders a serene body of water and I see the reflection of the impeccable Gurdwara floating on the deep blue waters of the pond. This pond is out of bounds for people. It is not meant for holy dips as I imagined it would be. I realize how my Hindu upbringing has conditioned me to expect things to be a certain way.

Gurdwaras are arguably best known for their langar. Langar is the main meal which is served all afternoon to every visitor, irrespective of their social standing or religious affiliation. Everyone assembles in a spacious dining hall – the langar hall, and takes a place on the floor in one of the multiple queues. Steel plates are provided to all and several volunteers (also known as Sevadars) take turns to serve all the dishes for lunch.

During my visit, I remember enjoying a wholesome meal of khichdi with ghee, makke-di-roti, aloo-subzi, papad and tomato chutney. These meals are cooked by volunteers and anybody can choose to volunteer. You need not be Sikh. 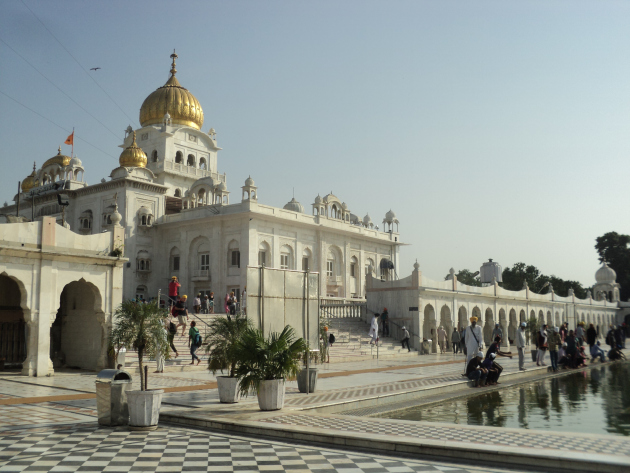 There are water stations at several locations and you can drink to your heart’s content from bowls of water. My Gurdwara served water in bowls and not tumblers, which was very interesting.

Step Eleven – Collect Your Things and Spread the Love

After your visit is done, don’t forget to deposit the headscarf (if you borrowed one) and collect your shoes and bags from the designated counters. I know this is a long list of steps to remember. So, when you are confused, just do as the Sikhs do! Before I left the Gurdwara, I dropped some money in one of the donation boxes and took with me memories of a wonderful afternoon.

I was an observer throughout my experience inside the Gurdwara. If I have misunderstood any practice or gotten any step wrong, kindly correct me by leaving a comment below. If you too have had a Gurdwara experience, share your account with me. I am all ears!

Places to visit in Delhi

View 110 places to visit in Delhi

View All Hotels In Delhi

9 Airbnbs In Delhi To Host The Perfect Houseparty

15 Interesting Facts about Delhi That Will Surprise You!

10 Stunning Airbnbs In Delhi For An Affordable Staycation

Haunted Places in Delhi That You Must NOT Visit Alone!

Chor Bazaar Delhi - Everything You Should Know About This Thieve's Market

Nightlife In Delhi For Singles: Ditch The Sheets, Hit The Streets

Most Famous Historical Places In Delhi

Best Chhole Bhature In Delhi - Head to These 15 Eateries!

13 Malls in Delhi For Shopping, Food, Movies and More!

15 Eateries in Delhi for a Vegetarian

Food Festivals in Delhi That You Just Cannot Miss

Resplendent Parks in Delhi for a Perfect Day-out