Hello folks! This is my Carpe Diem story of solo backpacking in Bhutan.

You guys may know Bhutan as the "Happiest Country" in Asia, and believe me when I say "It doesn't disappoint". Genuine happiness and tranquillity everywhere, not exaggerating the fact, but I didn't find a single soul that looked unhappy anywhere throughout my journey. Bhutan is a democratic country under the king's rule, who is known as the "Dragon King". Rather than measure the country's growth & economy through GDP, they follow a philosophy called "Gross National Happiness". 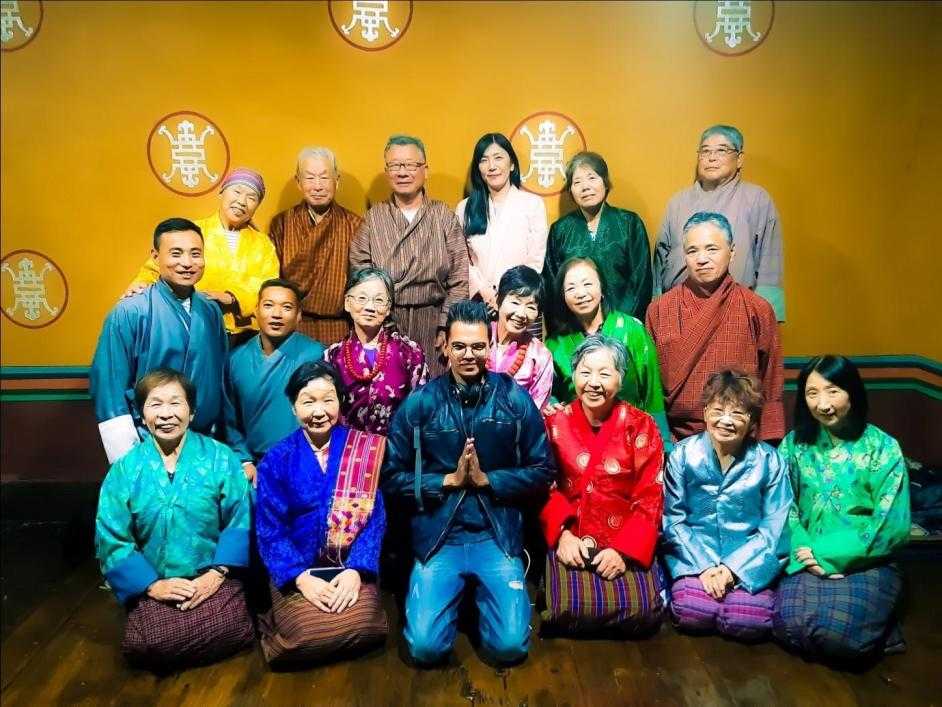 I wrapped my Immigration process within 45 minutes and took a shared taxi to Paro, which was by far the best car ride that I had been in. The views were enchanting with crystal clear river flowing next to the road, and I was surrounded by humongous mountains all around. Once I reached Paro, I found a rustic homestay on the outskirts called "100 Years Old". Here, I met a group of foreigners touring Bhutan from Korea who were clad in colourful Bhutanese traditional attire. 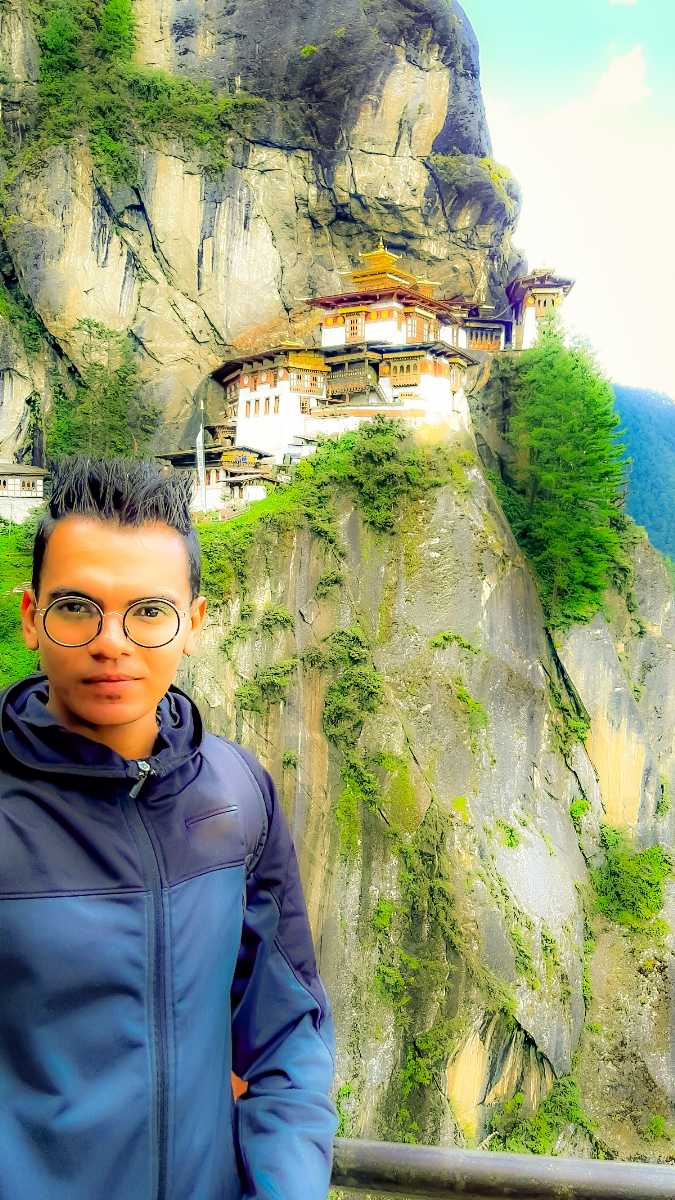 I woke up early the next morning and took a taxi to the base of Bhutan's most famous hill "Tiger's Nest", locally known as Paro Taktsang. I started my hike at 9 AM from the bottom of the hill and was able to cover the halfway mark within 2 hours. Complete greenery and small water streams flowing amid the trees make up your path. After another two & a half-hour of trekking, you will be able to gaze upon the famous Buddhist temple atop the hill. I was mind blown looking at the view from the top. This was one of the most beautiful treks that I had been to. I could see miles into the horizon and "God", the view was intoxicating. 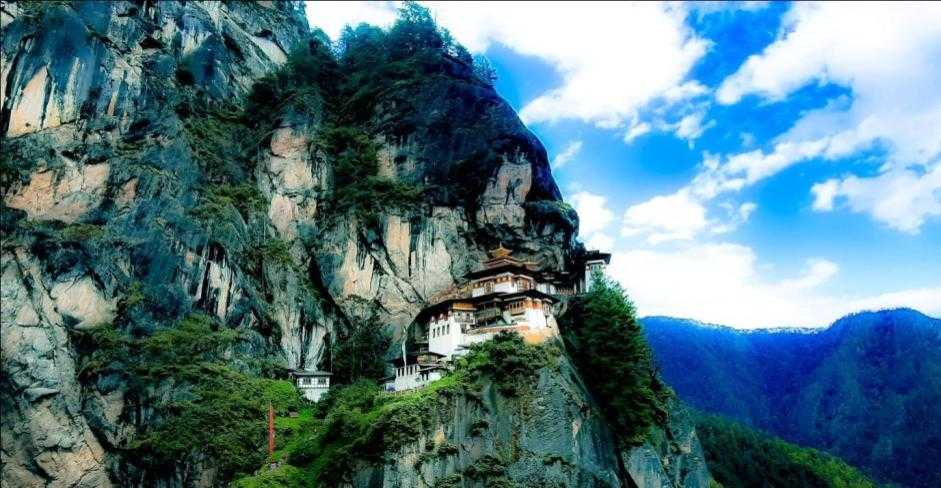 A ticket to visit inside the temple will cost you INR 500, but it is worth every penny. The structure & statues inside will leave you spellbound. Few guides are assigned to a group of 10 people, and they will explain the complete history of the place. Once done, trekking downhill is more comfortable and is easily completed within 3 hours. After reaching back and an hours rest at the homestay, I went into the town to explore the famous Paro shopping lane. The lane, which is about 500 meters long has local shops on both sides. This is one of the best places to shop in Bhutan, as you get all types of merchandises & gift items. You can bargain with the shop owners & they'll give you a good deal.

I had booked a taxi for the whole day to explore various places near Paro. 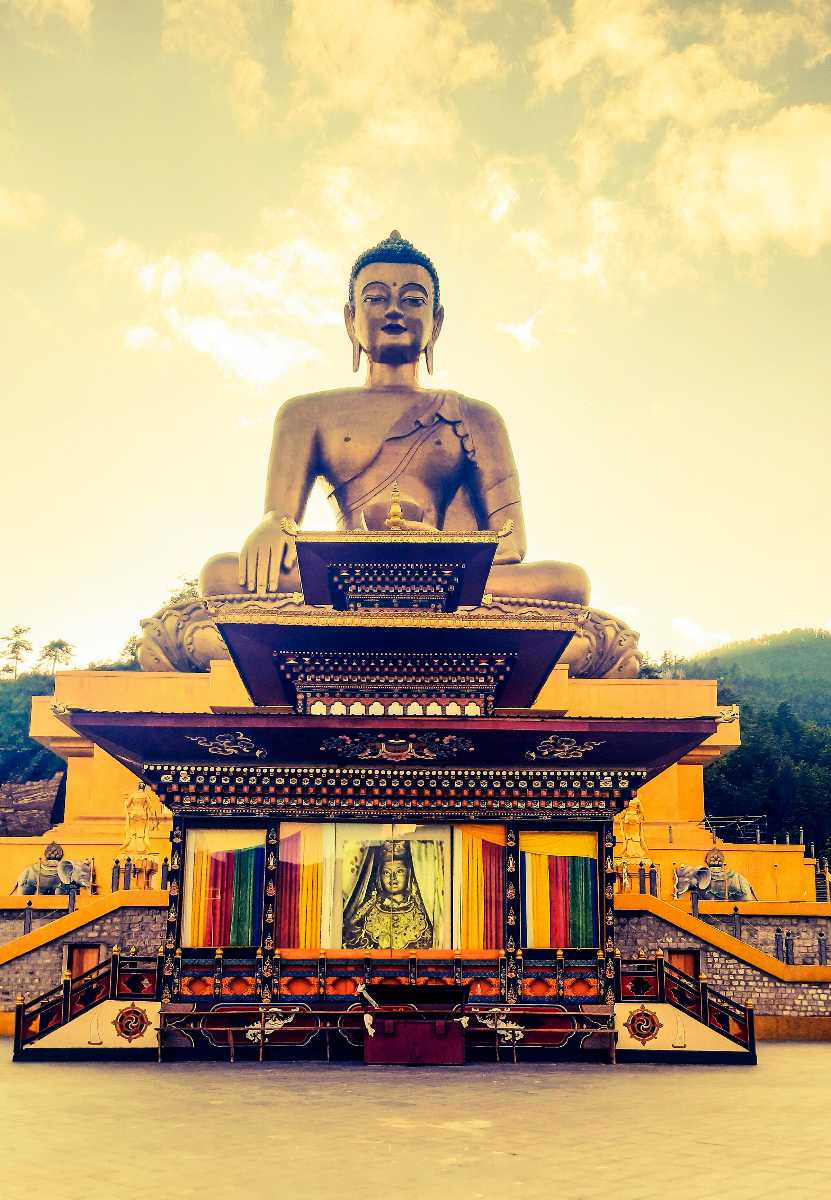 I started the day by hurrying to catch a local bus to Thimpu. Few places that I visited are: 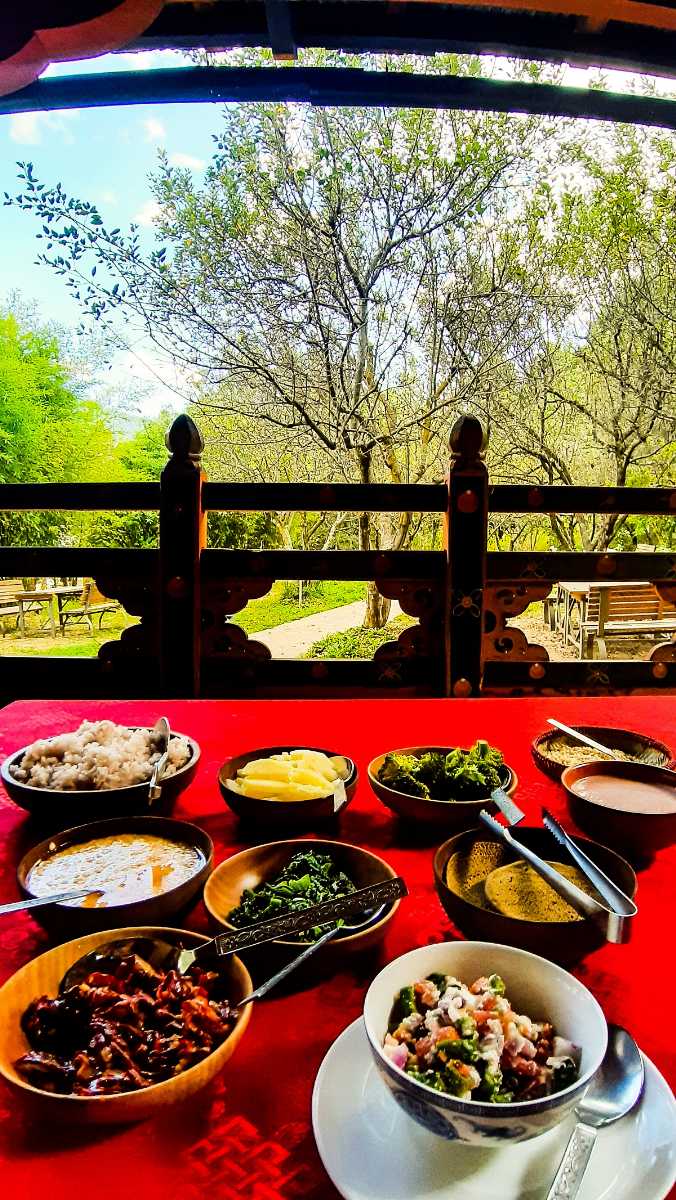 Punakha is a small Himalayan town covered in pristine greenery and rivers all around. 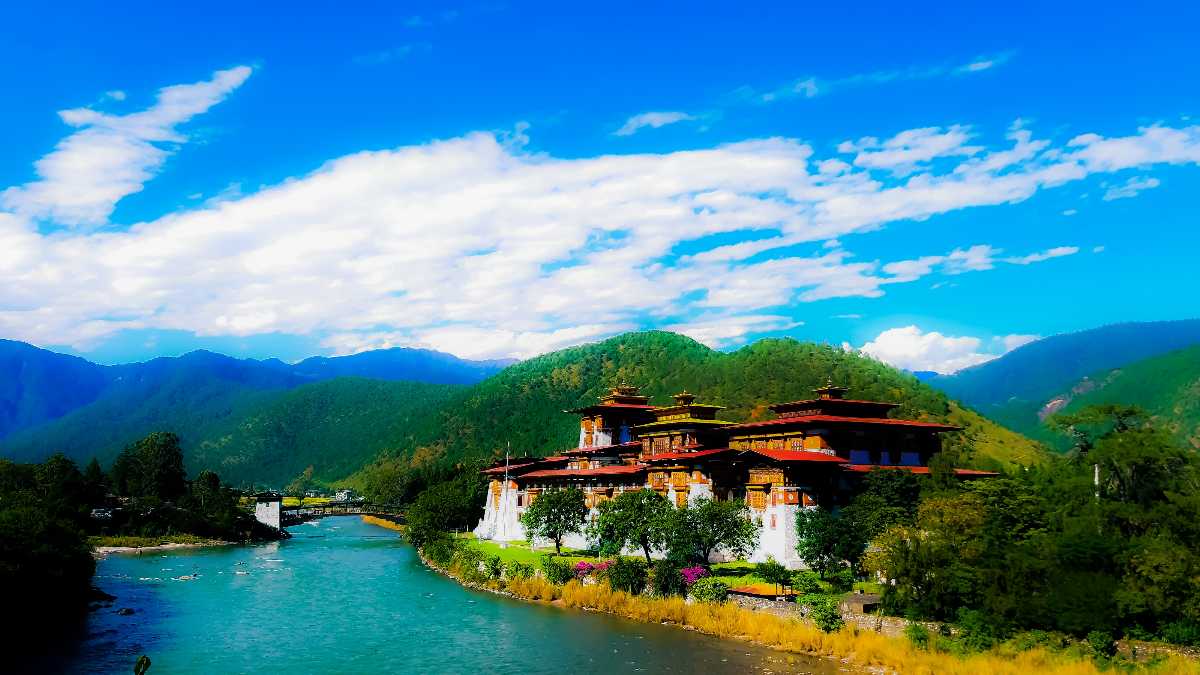 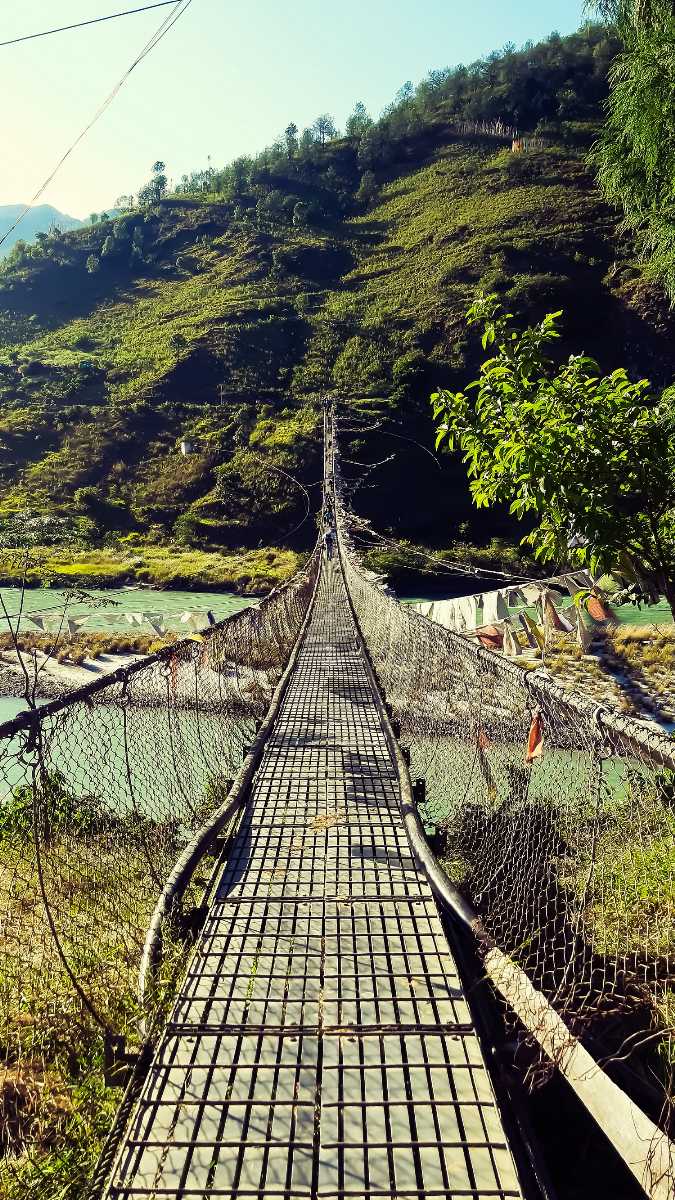 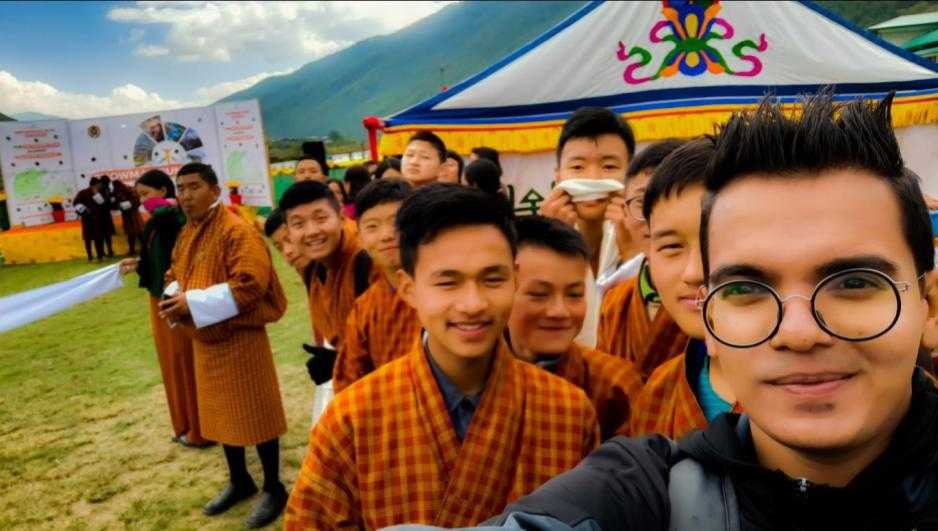 Bumthang district is situated in the middle of four mountain valleys. The human population is sparse here and has its own cheese and beer brewing factories. A tour inside these factories is available for a fee of INR 150. Also, I was lucky enough to witness the closing ceremony of the first inaugural "Snowman Run Bhutan". It is dubbed as the world's toughest snow marathon, covering more than 300 kilometres. 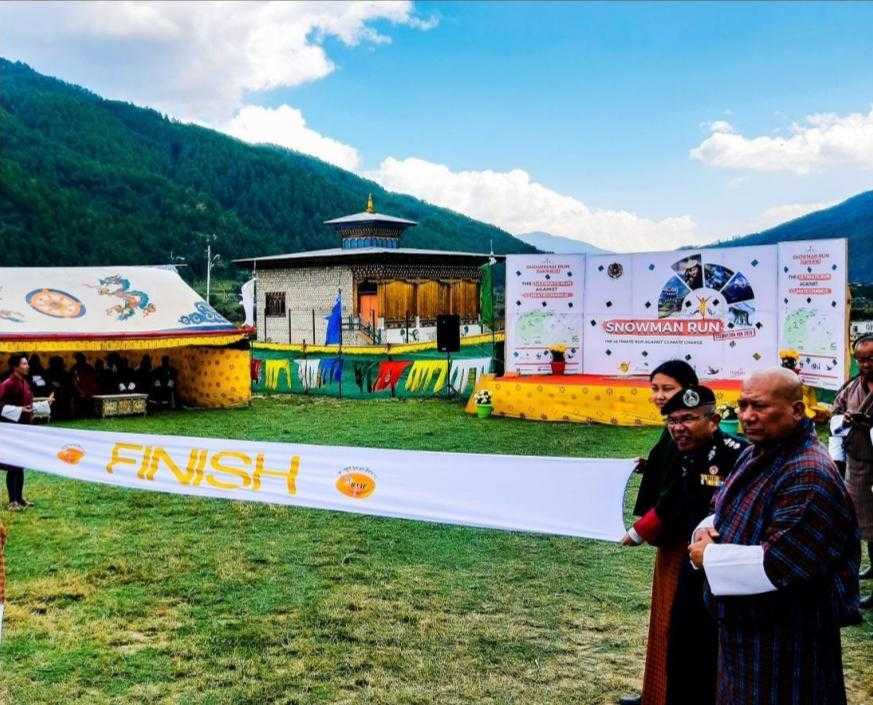 I could find joy all around Bhutan because of their simplistic lifestyle and respect towards nature. Bhutan is the perfect epitome of "Atithi Devo Bhava". After 13 days of solo backpacking, it was time for me to return to the motherland. I decided to go on this journey in a spur of the moment, and it ended up being the best trip that I had undertaken. It taught me the significance of a smile and the vibe it spreads, illuminating happiness everywhere.

Places to visit in Bhutan

View all places to visit in Bhutan

Bhutan in June - Weather & Other Things You Need to Know

River Rafting in Bhutan: Experience Rafting in the backdrop of the Himalayas!

7 Homestays in Bhutan - Your Home Away From Home

Mountain Biking in Bhutan - Thrill in the lap of Nature

Incredible Things to Do in Bhutan

Head Out To The Land Of Happiness With This 7 Day Itinerary!

Virat Kohli & Anushka Sharma's Trip To Bhutan! Here's Why You Should Head There too!

Monsoon in Bhutan - Weather, Essentials to Carry & Things to Do

Bhutan in August: Why August isn't such a Bad Idea For Your Trip

Bhutan in September : Weather, Essentials & Things to Do

Smoking in Bhutan - What All You Need to Know

Languages of Bhutan - A Guide to Familiarise With The Culture

An Ultimate Guide to Bhutan in April and May

27 Interesting Facts About Bhutan You NEED to Know!

Knowing Different Colours of Bhutan through its Festivals

Delhi to Bhutan : A Budget Friendly Way to Reach Bhutan from Delhi

Kolkata to Bhutan : How to Get to Bhutan From Kolkata

India to Bhutan by Road

Culture of Bhutan: Explore the Mysterious Nature of the Himalayan Kingdom

13 Bhutanese Arts and Crafts for the Wandering Artphile

Food Of Bhutan - 14 Dishes You Must Try While In Bhutan

Luxury Hotels in Bhutan for a Royal Experience

Bhutan in June - Weather & Other Things You Need to Know

River Rafting in Bhutan: Experience Rafting in the backdrop of the Himalayas!

7 Homestays in Bhutan - Your Home Away From Home