10 Meditation Retreats in India to Find Your Inner Zen

₹ 7,099 onwards View Packages
Meditation is a state of profound peace that the body experiences when the mind is calm and silent, yet completely aware of the surroundings. It dates back to thousands of years, but its origins remain unknown. It is certain that Buddha had played an important role in its widespread practice. Around 500 B.C, Buddha had attained enlightenment by meditating under the Bodhi Tree which later led to a major difference between Hindu and Buddhist meditation. While the Hindus believed that meditation should be used to understand a higher power, Buddhists took it up as a means of realising one’s relationship with all beings.

India, in particular, has been attracting tourists from all over the world. Many Gurus and experts in this field have set up meditation centres at different parts of the country. The success of such centres is mainly due to the difference that meditation has made to people’s lives. By using relaxation techniques such as meditation, the body releases catecholamine, and other stress hormones are reduced.

Being one of the premier countries to have brought meditation to the world, here is a list of some of the Best Meditation Retreats in India:

1. Ananda in the Himalayas 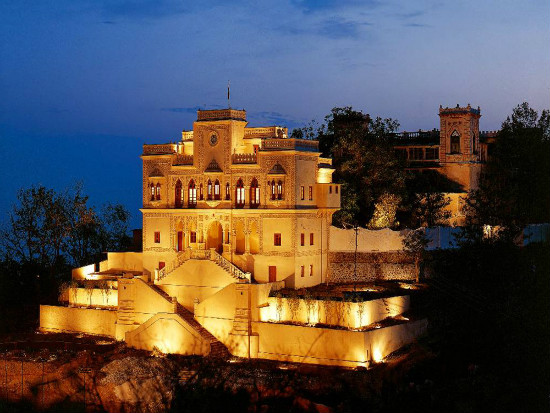 “Ananda” literally translates to “extreme happiness”, and that is what this meditation retreat in India has unceasingly been providing its guests with. Located amongst some of India’s most important and unique geographical features; the Himalayas, the Ganges and the ancient cities of Haridwar and Rishikesh, it boasts an impressive record of highly influential guests like Oprah, Bill and Melinda Gates, Deepak Chopra amongst many others.

Ananda In The Himalayas is the country's most luxurious, authentic Ayurvedic wellness destination and is fittingly set up in a Palace of the Maharaja at Narendra Nagar, Tehri-Garhwal. They have a number of packages that are suitably customised to accommodate the needs of the guests and the length of stay varies according to that package. Tranquillity and the feeling of being with nature have been attracting scores of people from all over the world. 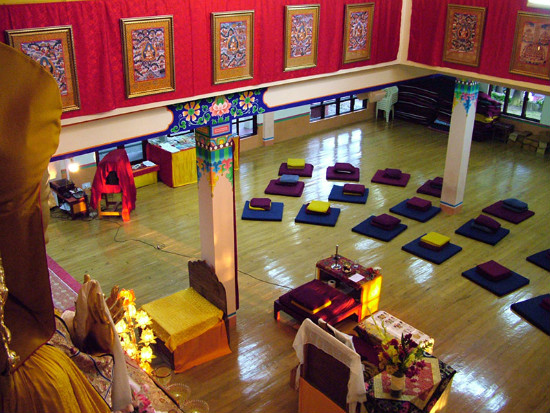 At an elevation of 2004 meters, McLeod Ganj is a suburb of Dharamshala; the town that had provided refuge for thousands of Tibetans who fled their country when the Chinese invaded. Since their settlement headed by Dalai Lama, McLeod Ganj has become a vibrant dwelling resonating the Tibetan culture the ancient religion of Buddhism.

Set up in this beautiful place is the Tushita Meditation Centre. It offers various meditation retreat options varying in duration and intensity, and its location cannot get better. Discipline is a key factor in getting the most success out of such retreats. The retreat aims at avoiding all sources of distraction that one faces in daily life. This is why the visitor is made to distance themselves from TV, mobile, WiFi and help the person in understanding their true self and finding inner peace. 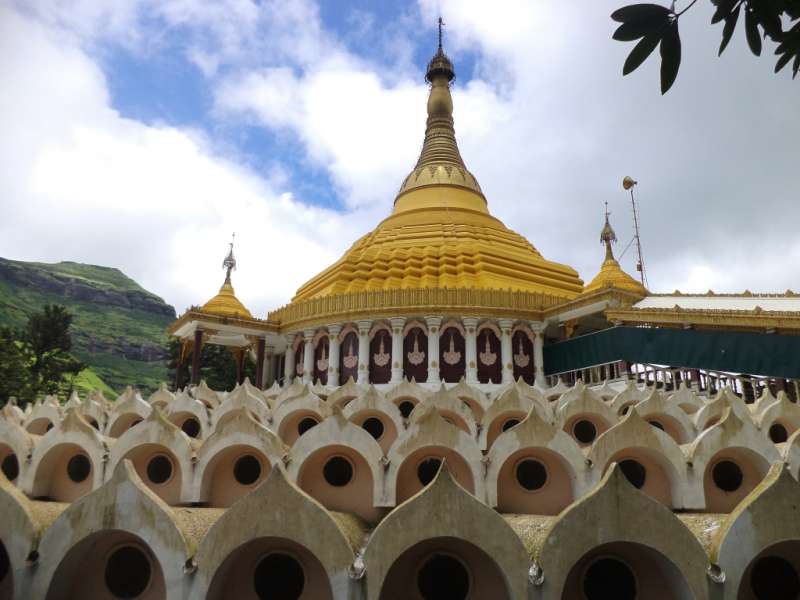 Vipassana means “to see things as they are” and it differs from mindful meditation. While meditation usually focuses on awareness using a mantra, Vipassana demands non-reaction.  Vipassana enables us to experience peace and harmony by purifying the mind, freeing it from suffering and the deep-seated causes of suffering.

At Igatpuri, one can learn this by attending a 10-day course formulated by Dr.S.N.Goenka at the world’s largest Vipassana Meditation Centre. With a rigorous schedule and a will to gain inner peace, one can find themselves truly transformed after the retreat. Usually with a 2-month waiting list, if you are planning to make a visit here, planning well in advance in much encouraged.

During one of the days of the retreat, there is a discourse held which explains the science behind Vipassana and stresses on the fact that it does not have any religious association; contrary to popular belief. 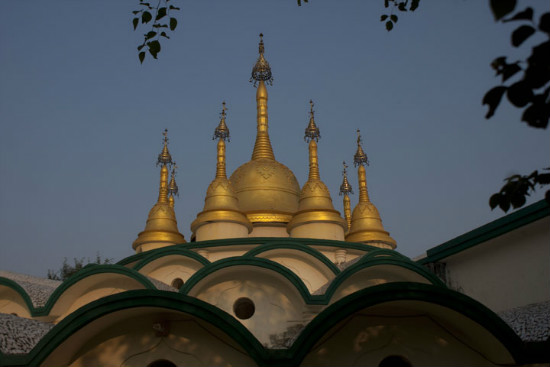 It is well known that Gauthama Buddha first obtained enlightenment at Bodh Gaya, Bihar. Hence, visiting the Dhamma Bodhi can also be fascinating to history buffs. At Dhamma Bodhi, Vipassana meditation is widely taught under the guidance of S.N.Goenka. 10-day courses generally on the first and the 16th day of every month and the classes can consist of 80 students at a time.

At Bodh Gaya, the MahaBodhi Temple Complex houses a Bodhi tree where one can escape from the hustle-bustle of the city life and find peace and tranquillity at the same place as once, the Buddha did.

Widely popular for its nightlife and party scenes, Goa also houses one of the country’s best yoga retreats at the untouched and pristine Mandrem Beach. Those with a penchant for beaches, luscious greenery, hammocks with the added advantage of learning yoga professionally should pay a visit to this retreat. Its tranquillity has consistently left its guests coming back for more regardless of a variety of other options to choose from.

Unlike other meditation retreats where strict vegetarianism is prevalent, at Ashiyana, chicken and fish are served few times of the week and the vegetarian food is not bland. Visitors can also indulge in the spa services and relax at a number of quiet spots within the locale. The rooms are eco-friendly and one can choose accommodation from their three choices; the tree houses, eco-lodges and stone houses. 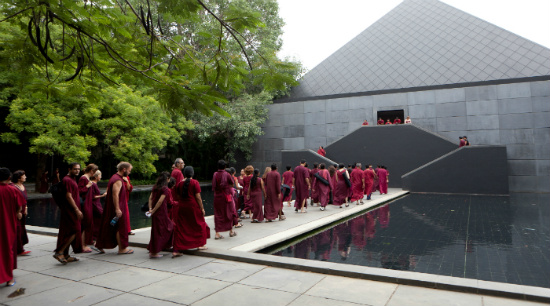 The one place in India where meditation is combined with the teachings of Buddha and the luxurious state of the art infrastructure is at the Osho International Meditation Resort in Pune. Retreat visitors can choose between living at the Osho Guesthouse and different Living In programs; suitable to their choices. At the Osho Multiversity, one can be found in the company of several others seeking to gain inner peace while being within a remarkable architectural structure. Apart from mediation, the resort offers its visitors an array of activities which encourages a cultural syncretism. Getting here has become easier as visitors can choose between flying to Pune, embarking a train journey and getting there by bus/car; thanks to an efficient transport system within the city. 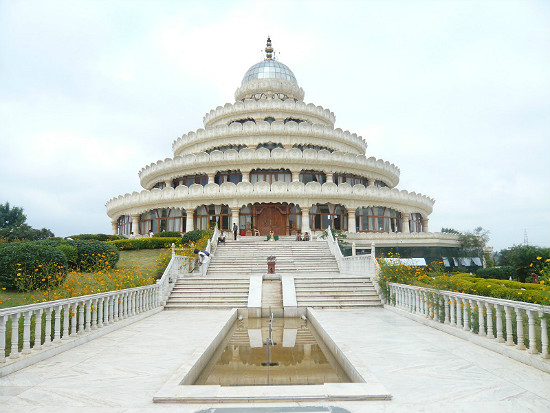 Enclosed within a 65-acre sprawling green land at the top of Panchagiri Hills, Bangalore with organic farms around the area, The Art of Living ashram is the perfect place for anyone who wants to take a few days or even hours away from the humdrum city life.

Offering courses based on a visitor’s knowledge of yoga/meditation, the entry-level programs are Sudarshan Kriya. “Happiness” programs and the Sri Sri Yoga & Meditation. Sri Sri Yoga is a 10-hour workshop that is spread over five days and is especially useful for beginners. This is different from Vipassana as the participant is encouraged to focus on a mantra and upon doing so the mind and the nervous system are made to reach a moment of relaxation.

Guests can also truly experience the ashram by using its facilities like the Ayurveda Hospital, Radha Kunj (a beautiful garden), Sumeru Mantap and for a unique experience of taking care of cows by visiting the Goshala. 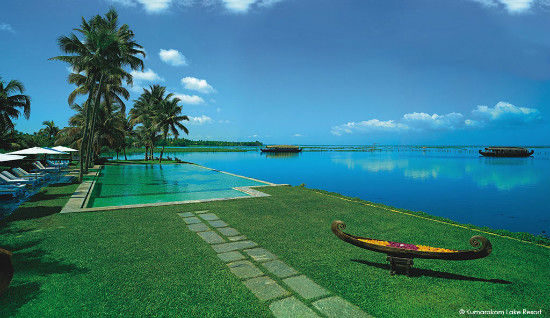 Kerala’s most coveted tourist spot is its backwaters. One of the best places for this is Kumarakom where India’s longest lake, Lake Vembanad, is located. Enstasy, the luxurious meditation retreat is scheduled to be held at the Kumarakom Lake Resort. It is an eight-day10  program for people from around the world to learn and experience meditation while living amid a lush tropical scenery. At the treat, one will study meditation based on ancient Hindu teachings and is a two part breakdown. The first four days will be spent in studying and practising meditation and the following four days are aimed at reflection, relaxation and excursions to carefully selected hideaways. On the foothills of Velliangiri Mountains, Coimbatore at the Isha Yoga Centre is a dedicated area for mediation called Dhyanlinga. The architecture of this structure has been carefully planned to keep in mind ancient traditions and using modern technology at the same time. An excerpt from their website will show readers what they can expect from this retreat.

“It does not ascribe to any particular belief or faith. It does not require any pooja or worship. Just sitting silently for a few minutes within the sphere of Dhyanlinga is enough to make even those unaware of meditation, experience a state of deep meditativeness….”

An interesting architectural feature of the dome in which the meditation is to take place, is that it was built without the use of steel, cement or concrete but with brick and mortar which were then stabilized with lime, sand, alum and herbal additives which are meant to last for more than 5000 years without any dissipation.

Set up in the year 1926 by Aurobindo Ghosh, one of India’s greatest philosopher poets, Sri Aurobindo Ashram has been one of the most famous meditation destinations in South India. The philosophy of its founder which was deeply rooted in yoga inspired a number of followers including a Parisian musician called Mirra Alfassa. Under her guidance, Auroville or the ‘City of Dawn’ was set up and witnesses hundreds of disciples meditating around the Matri Mandir every month. This Ferrero-rocher shaped building requires a prior booking in case one wants to meditate inside the building. The architecture of the building is one of its key attributes; there is a crystal in the centre of the meditation area upon which a lone ray of sunshine passes through and gives a spectacular visual display. It is advisable to make a trip to Auroville for more than one day and not club it with your trip to Pondicherry because the experience in Auroville is one of its kind. There are some cafes in this town which serve a variety of cuisines and guests can also visit the Auroville Beach.