Traversing through beautiful plains and to exotic destinations, the exquisite luxury trains in India, that float majestically in the major tourist circuits of India are an attraction to the affluent from the country and abroad. With 5 star hospitality and only the best services on board, the royal railway network has to be the most exclusive and yet one of the most culturally rich experiences of all times.

Here is the list of 5 luxury trains in India:

One of the finest luxury trains in India

Palace on Wheels is India’s first luxury train which started being operational on 26th January, 1982. It is indeed one of the finest luxury trains in India for the royalty. Originally designed to cater for the rulers of the states of Gujarat, the Rajputana, the British Viceroy and the Nizam of Hyderabad, complete with luxury amenities and two different dining options, it is an absolutely royal affair. 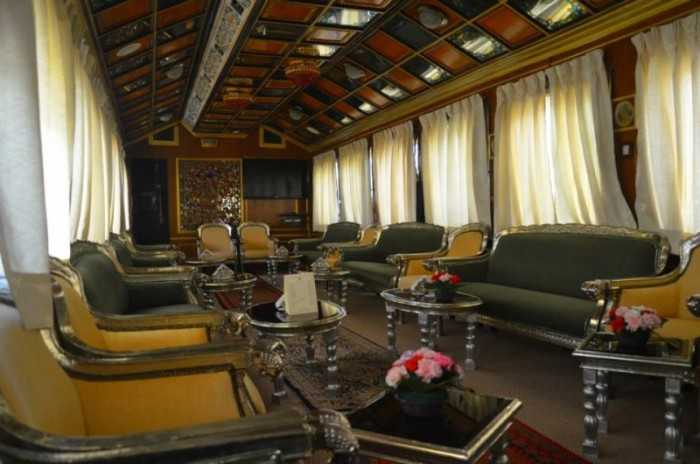 With 14 coaches named after the Rajput states of the pre-Independence era, the saloons come with inlaid motifs crafted specially for this particular rail service, wall to wall carpeting, all the upholstery done in the richest fabrics, and only the most hospitable and traditionally clad staff. Television sets, individual pantry and bathrooms with each coach along with a personal attendant, are just few of the host of facilities available aboard. Launched by the Indian Railways to promote Rajasthan Tourism, Palace on Wheels is the pioneer in the field of uber chic travel, and affixed at the helm of luxury trains in India. 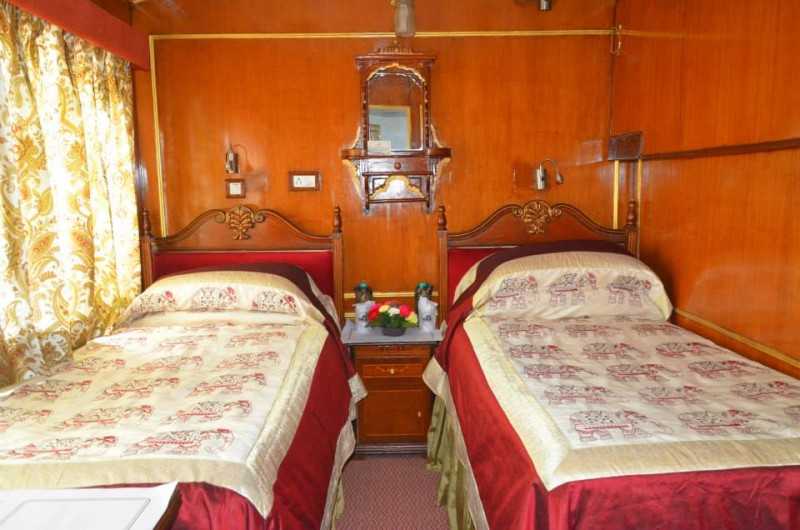 Sporting the most royal of royal blue, the Deccan Odyssey has one of the most eye catching regal coaches, dipped in indigo and adorned with golden motifs. It is run by the Maharashtra MTDC and Indian railway, and was initiated to boost the tourism of Maharashtra. Ten out of the twenty one coaches of the Deccan Odyssey are reserved for the most luxurious purposes, like a bar, conference cart and even a health spa, apart from a critically acclaimed restaurant on board.

With a whopping 10 journeys planned keeping every possible travel theme in mind, from tourism to spirituality, planning a luxury train ride was never easier.  Named after different regions in Maharashtra, the coaches are sheathed in luxury and elegance with state of the art blue and gold themed decor and Marathi motifs. A perfect choice if exploring central and south India figures in your bucket list. 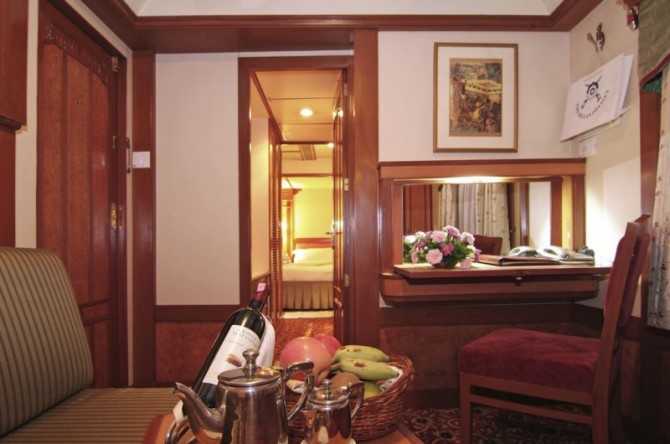 Modeled on the Palace on Wheels, Royal Rajasthan on Wheels is one of luxury trains in India specifically designed for a comprehensive tour of the culturally rich Rajasthan. It was modelled on the Palace of Wheels and initiated for the same purpose as well. The interiors of this luxury train in India have been done up tastefully in style of Rajasthani royal palaces and every non-residential coach like the two restaurant coaches, the spa coach and the souvenir coach sport extremely individualistic designs and are thematically designed keeping in mind the aesthetics of nothing less than royalty. 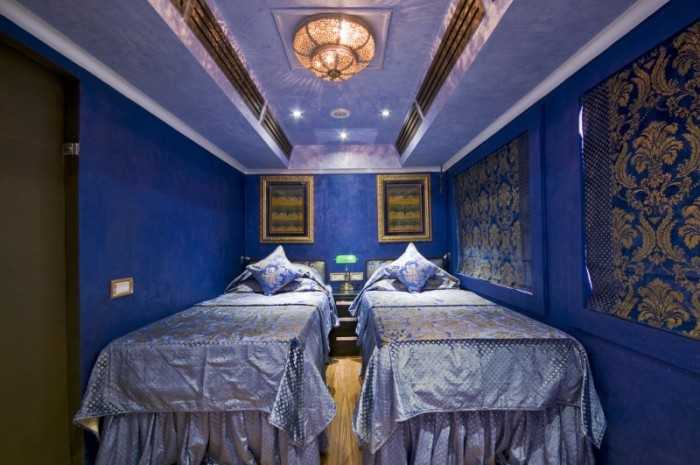 Especially noteworthy are the two restaurant coaches are the Swarn Mahal coach, styled in gold and brass combinations, and the Sheesh Mahal coach which is adorned with crystal pelmets and majestic floor lamps. For a well rounded trip of the state soaked in a royal past and a proud heritage, Royal Rajasthan is your best bet. 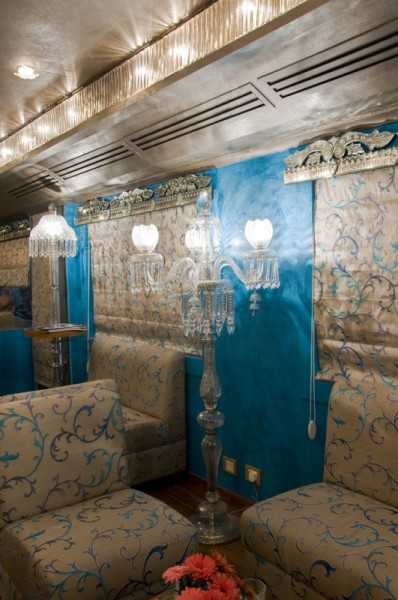 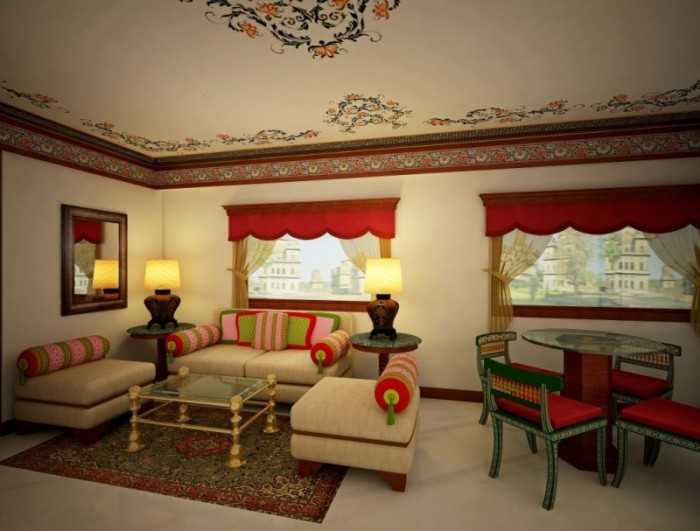 Five tastefully charted journeys, keeping in mind the various demands of the passengers. Two routes covering the Delhi-Agra-Jaipur’ Golden Triangle and three pan-Indian trips are available to the passengers. The most uber and luxurious train in India in its class, Maharaja’s Express calls for respect and one ride in a lifetime at least. 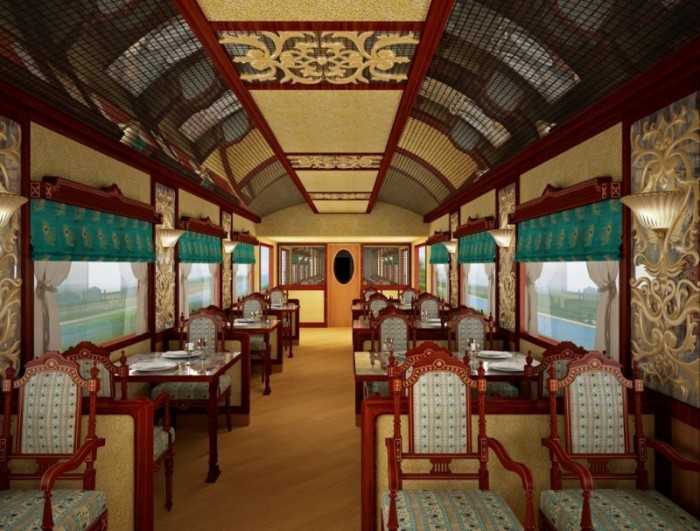 Just the beautifully and soft yet commanding violet and gold exterior of the luxury train coaches is enough to command your attention and as if that was not enough, the Golden Chariot, which derives its name from the chariot sculpture in the Hampi ruins, the tasteful interior decoration on the lines of South Indian architecture is mesmerizing. It’s one of the newer additions to the luxury trains of India. 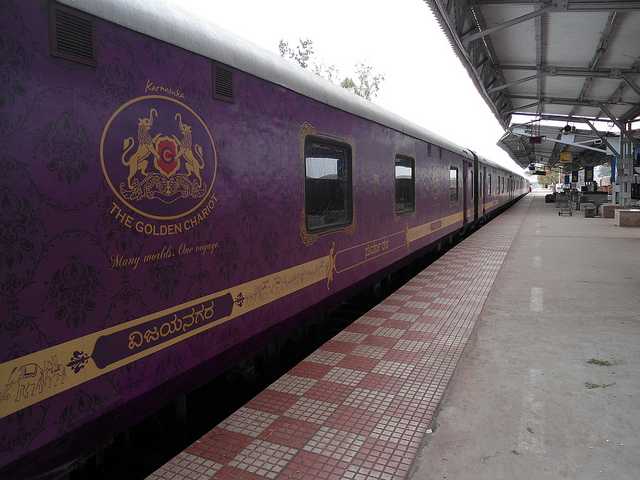 From the lounge bar, ‘Madira’, drawing its decor from Mysore palaces, and the coaches drawing strongly from Mysore and Hoysala architectural movements with state of the art carvings adorning the walls and ceilings, the Golden Chariot is an overwhelming experience for the senses, making it to the list of most luxurious trains in India. The culinary options are no less, with a full fledged vegetarian and non-vegetarian menu, and the residential coaches equipped with state of the art uninterrupted luxury services and decked with the most exquisitely carved furniture.

Drawing passengers from all over the world, the Golden Chariot is indeed a golden opportunity for those who want to explore the best of South Indian heritage.

Follow the Buddha’s journey on this Buddhist pilgrim train across India and Nepal. This train derives its name from ‘Mahaparinirvana Sutra’, which is a final explanation of the Buddha’s teachings. This train journey gives you the experience of soaking the history and culture of the places like Bodhgaya, Varanasi, Sarnath, Lumbini and Sravasti where the Buddha travelled.
The Mahaparinirvan Express has 18 first AC berths, 92 two-tier AC berths and 256 three-tier AC berths. Piping hot tea, coffee and meals are served on board. It arrives at Gaya in the morning where tourists can visit temples, stupas, monasteries and other foundations of Buddhist culture.

This train is royalty on wheels. This regal train travels from Gujarat to Rajasthan, stopping over at important tourist destinations such as  Chittorgarh, Udaipur, Junagarh, Veraval, and Somnath. 13 elegant blue coloured coaches and each saloon has an attached bathroom plus two attendants who will serve you round the clock.
The Royal Orient serves food fit for the Rajput kings themselves, with everything from Indian, Chinese, Continental, Gujarati and Rajasthani. Equipped with a well-stocked bar called “The Watering Hole”, which serves Indian as well as international liquor round the clock. The train also has a library with a wide range of books, magazines and a lovely lounge which has a T.V and a CD player.
Traverse through the forts of Junagarh to the palaces of Jaipur and stop off for desert safaris and other sightseeing tours. It is a great experience for those who are looking to explore the forts, palaces and monuments of Northern India.

Carrying passengers since 1855, thus making ‘Fairy Queen’ the “world’s oldest running steam locomotive” according to the Guinness Book of Records. Safe to say that this train carries not only passengers but a rich history as well. This train also stops off at the famous Sariska Wildlife Sanctuary. It is one of the more modest luxury trains in India and can accommodate up to 50 passengers.