Young, sure-footed, and gritty; sporting an everlasting smile and the very picture of dauntless energy and courage, the Rajasthan born, 21 year old Saachi Soni is all you aspire to be, if you’re an adventure enthusiast. But then, that is something that wouldn’t surprise you, for a girl who discovered her love for the mountains at a tender age of just 7.

The wonder girl Saachi is one of the youngest women so far to climb so many peaks in such quick succession. We got into a candid interview with the “Mountain Machine”, as she was fondly named by her teammates, to find out what makes her, her. Read on.. 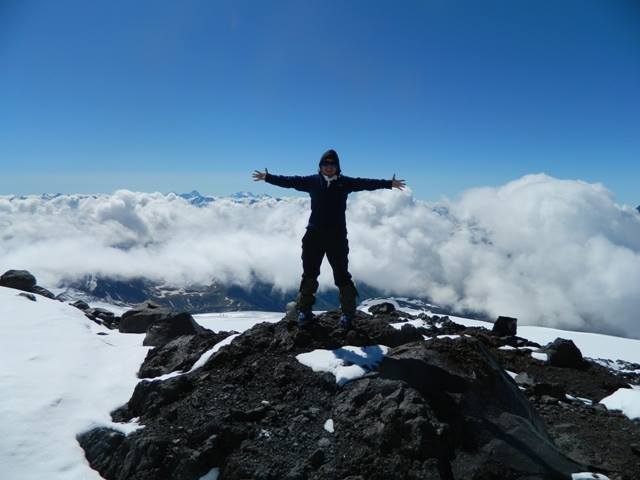 We were curious to know how a young Saachi is so motivated about climbing and what stokes her love for the hills.

Saachi started Mountaineering and adventure sports at the young age of 7 and since then, she says, the bond between her and the Mountains only grew stronger.

“Mountaineering is a sport where there aren’t thousands of fans cheering for you rather you have to motivate yourself and the group just to unfurl the tricolor on the peak. Your lungs are screaming, body is aching to give up as you are lugging around 100 pounds in a murderous terrain. People might scoff at the idea, even call you mad, but to some people it brings great joy. Here what counts is true grit, facing all the challenges of the arduous climb, yet enjoying the beauty that surrounds you. And boy, what validation it brings in its wake.”

So, what are the different peaks that the youngster has climbed? Isn’t she a mini-celebrity already, being such a prowess in the world of mountaineering at such a young age?

Saachi started snow skiing at the age of 7.

She climbed the mighty Mt. Everest in 2013

She’s also climbed Mt. Mckinley (20,320 ft), the Highest peak of North America and also one of the coldest and among the top ten dangerous mountains of the world- The team reached upto 17000ft, inclement weather didn’t allow them to move further.

She climbed Mt. Elbrus- Europe’s highest peak, and became one of the youngest Indian women to do so. 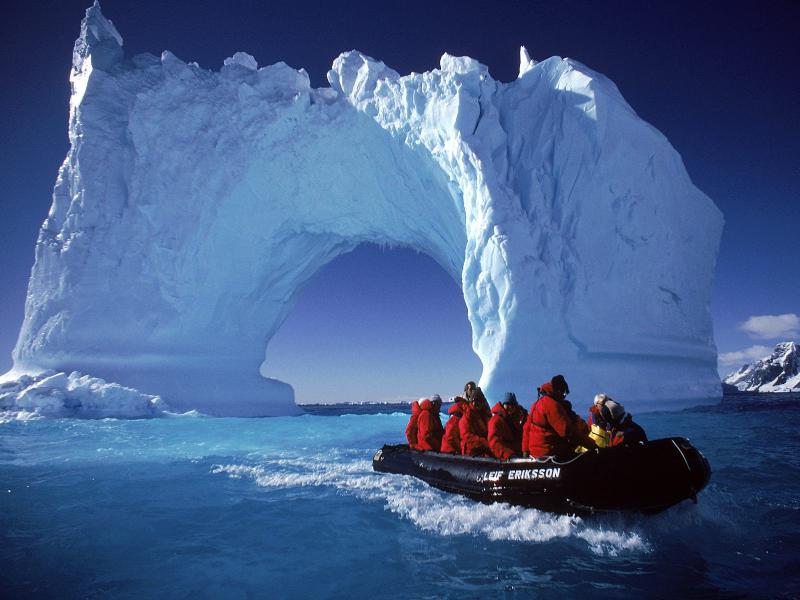 Tell us more about Mt Elbrus!

“It is always a great climb and the experience was absolutely phenomenal. The weather was rough and we climbed amid high winds. My teammates named me ‘Mountain Machine’ since I always led the group and was the fittest. I suffered a severe shoe bite which caused my ankle to bleed. However, I continued resolutely for the glory of my country. After reaching the summit, I kissed the earth in a gesture of gratitude towards the mountains for allowing me to step upon them. The most emotional moment for me arrived when I unfurled the tricolor at the peak and sang the Indian national anthem. Later, I was felicitated by the Indian high commissioner to Russia for this feat.”

She has also climbed Mt. Kosciusko (highest peak of Australia) and 10 of the highest peaks of Australia – Completed in just 2.5 days (95Km hike) and became the Youngest Indian Person to do so.

The gritty girl has also climbed - 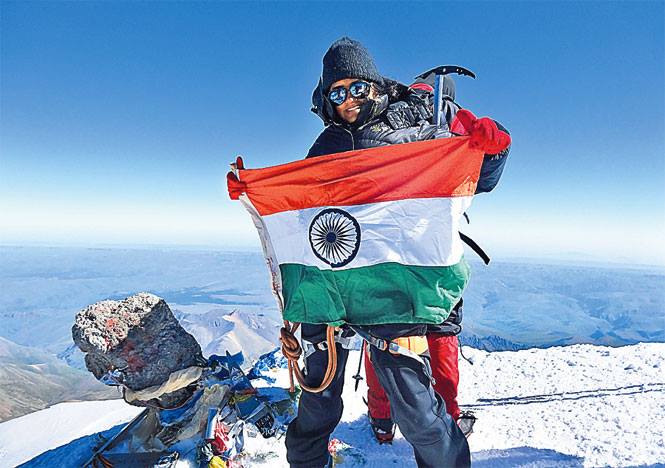 How does she manage such a time taking full-time activity with college and academics?

“I have received the Best student, all-rounder and principal’s Honour roll call award for three consecutive years while I was pursuing Graduation degree from IP College for Women, DU.

I have covered Europe’s expedition for CNN IBN as a Citizen Journalist for special telecast on Independence Day special.

I was invited as a panelist for Narendra Modi’s Chai Pe Charcha on International Women’s Day.” 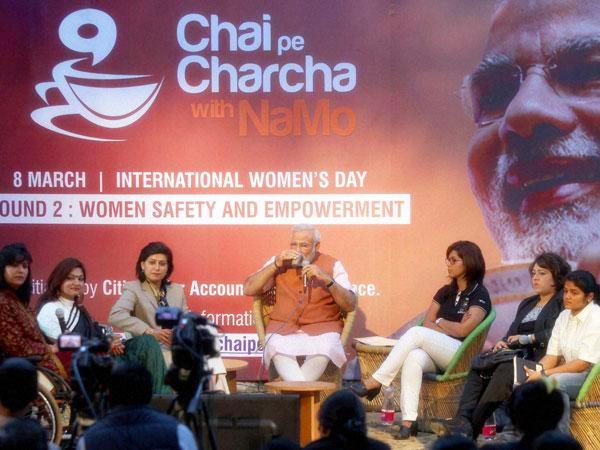 Saachi was also named Rajasthan’s Woman of the Future!

How has Saachi’s journey been so far? She recounts tales from her expeditions, which will liven up many a tea party!

“In September last year, I scaled an unnamed technical peak in Spiti Valley which is in Himachal Pradesh. The height of this peak was 6050 meters. The purpose of this expedition was to open the route to the summit which involved fixing ropes, checking the gradient, safeguarding the path against hazards, and using our mountaineering skills to reach the summit of the peak. After two days of climbing we succeeding in reaching the summit camp. Despite being extremely exhausted, we decided to continue pushing ahead to the summit after a brief rest. The next day, I embarked on the final leg of our expedition with two other experienced climbers. Our bodies ached and our stomachs were empty but that did not deter us. After opening the route, we returned to the camp.

We were completely famished and the meager meal consisting of some cold frozen rice, chocolates and dry fruits, was heavenly for us. We quickly recovered our strength since we had to prepare for the early morning climb in which we were to lead the whole team of seven people. I was the only girl in lead. Our rest was brief and uncomfortable. Three of us were sharing a single tent. We were huddled together to keep warm since the inside of the tent was wet. After this short nap of a few hours we rose at 3 AM and collected the gear required for climbing. The push towards the summit was quite challenging. The gradient was 70 degrees steep.

We engaged in a three hour long climb up the bottle neck leading to the peak’s summit after which another three hour long climb up a 65 degrees steep slope to the summit awaited us. In such a difficult terrain, it was a struggle to keep ourselves anchored while carrying heavy loads. Whenever we were heading up a tricky patch of ice, we made an effort to constantly motivate each other. This was the point of no return. To turn back now would have been fatal. After reaching the top, I unfurled the flag of my college along with the tricolor. This was one of the most difficult climbs that I had done in my life. Once it was completed I was overwhelmed by a host of emotions ranging from relief to great pride.” 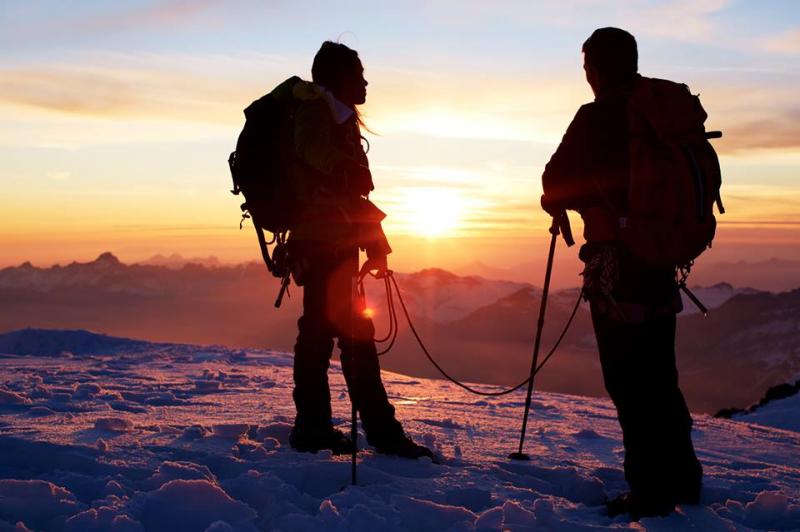 “The year had more in store for me. In October, I found myself in Australia where I became the youngest Indian to scale the ten highest peaks of the country. This was an extremely challenging task! The experience was unparalleled, and each moment of toil was completely worth it. I was bowled over by the beauty of the Australian Alps. I also appreciated how concerned the people of Australia are about their environment. I learned a lot in the course of this expedition. It also helped me polish the vision I have for the future of India in the fields of mountaineering and environment protection.”

When and how did you make the shift from a hobby to a profession? Any advice for budding mountaineers? 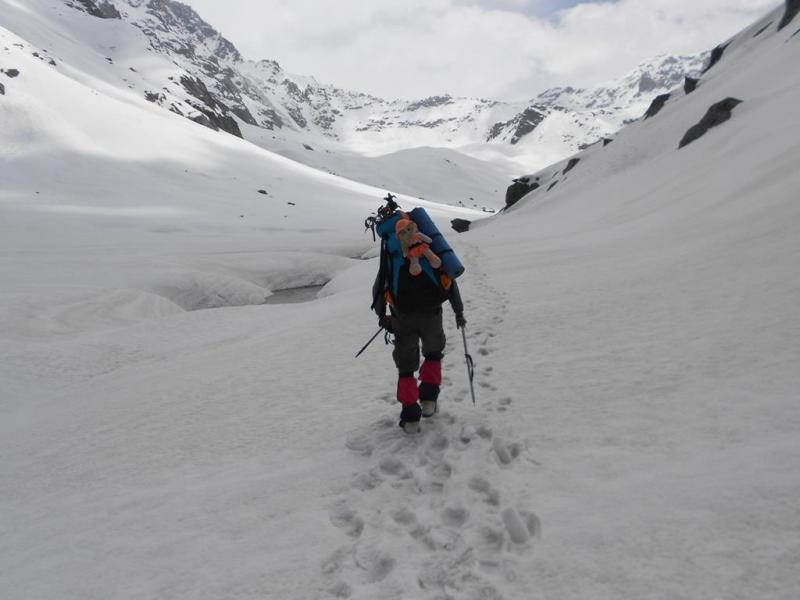 “I have a deep love for mountaineering, and I am happiest when I am on an expedition. I wish to continue onwards in this journey while bringing great laurels to my country while motivating the Indian youth in the same direction. I also had the opportunity to work as a Citizen Journalist with the Indian news channel Aaj Tak and covered my expeditions personally. I received recognition from various local, national and international media channels. My aim is to scale the highest peaks in all the seven continents. Working in this direction, I shall soon be embarking upon an expedition in South America. Life has been kind thus far, and I have come to realize that one can never go wrong with hard work.

In adventure sports there are no retakes. Even when our lungs are screaming for air, and our legs are aching to the point of numbness, we have to motivate ourselves and push on. There are no stadiums full of fans cheering us on; just the vast expanse of the sky that gazes down upon us as we put one foot in front of the other upon the blank canvas of the earth, convincing ourselves that we have arrived.”

How has been the support of family and friends for such an unconventional profession?

“While I am alone on the mountains, I am never lonely. The support and encouragement that I have received from my teachers, friends and family sustains me every step of the way when the going gets tough. I especially want to express my heartfelt gratitude towards Dr. Babli Moitra Saraf and Dr. Vinita Sinha who have been pillars of strength for me in all my endeavors. All that I have achieved could not have been without the inspiration and love that I have received from them.”

What is the most difficult and most satisfying part of the job?

“I have travelled to more than 5 countries now and made a lot of friends from all over the world.

The best part of my climbs is that I got chances to meet the local tribes of the area and live with them, enjoying and appreciating their culture and hospitality.

I am very passionate about climbing mountains, and the sun rising over the snow-capped peaks leaves me calm and unstilted and I just try to open my eyes and breathe in everything that I see. The Nights are spectacular when the endless Milky Way and calm moonlight are the only external things keeping your company.” 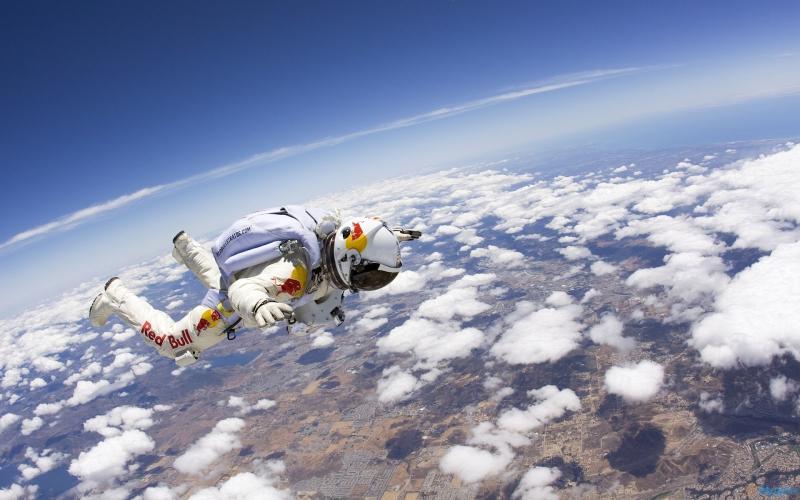 “Our country is laden with a rich culture, diversity and resources. The Himalayas are perhaps the world’s most beautiful mountain ranges that I’ve seen so far.”

What are your future plans?

“It has been always a spiritual connection with the mountains for me.

I have recently finished my graduation in Mass Media and Mass Communication (Honours) from IP College for Women Delhi University and I am currently pursuing advertising and PR from Indian Institute of Mass Communication.

I aim to do 7 summits (scaling highest peak of each continent).” The zeal and enthusiasm is the eyes of the girl is plain infectious. She trudges along mightily, making Indians as a unit, extremely proud. We wish her the very best in all future endeavours.