In Search of Kartikeya : Kumara Parvatha

Kumara Parwata or KP as its widely known by trekkers all around India has a lot to offer. Even before we started the trek, we were already soaked in divinity as the trek starts near the entrance of the temple Kukke Subramaniya. Situated at height of 1712 metres in Pushpagiri Wildlife Sanctuary, KP is much more than being just “The most challenging trek in South India”. 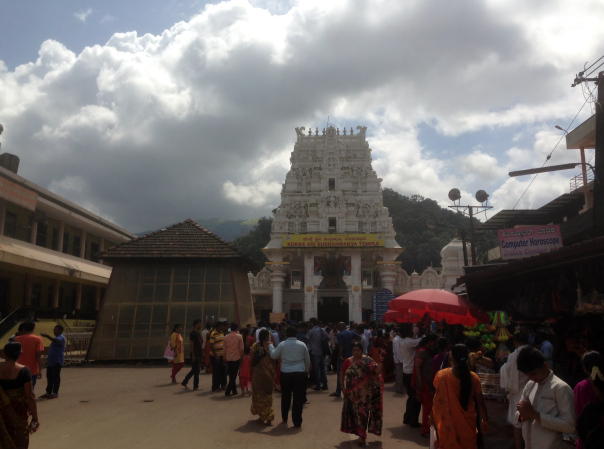 An epic amalgamation of history, mythology and a trekker’s haven.

According to the legend, Kartikeya (Lord Shiva’s son ) or Subhramya or Murugan got married to Devasena ( Lord Indra’s daughter ) in the hills of Kumara Parvatha. There’s another story associated to Kumara Parwatha :

The divine serpent Vasuki whom Lord Shiva wore as an ornament around his neck, was threatened by Garuda ( mount/Vahana of Lord Vishnu). Vasuki performed tapas (worship) for numerous years in the caves of Kukke Subhramaniya temple trying to avoid attacks from Garuda. Lord Shiva decided to send his son Kartikeya to protect Vasuki from Garuda. Apparently Kartikeya visited Kumara Parvatha and blessed Vasuki that he shall stay with him forever. From then onwards the pooja offered to serpent shall be considered as the pooja offered to Kartikeya himself.

Before starting the trek, fill your tummies with deliciously made South Indian delicacies at restaurants located near the Kukke temple in the town of Somwarpet. 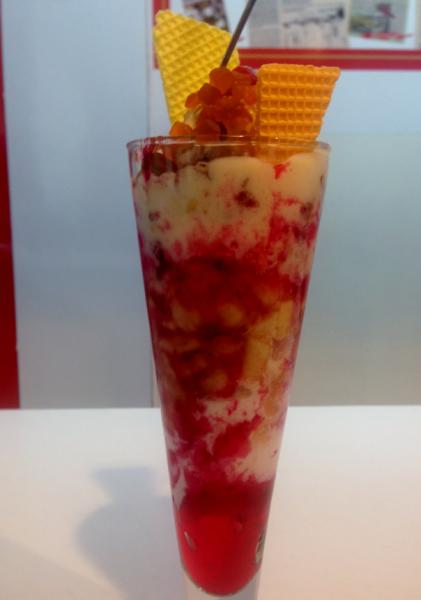 We were a group of 40 (36 participants and 4 BMC cordinators ). The trek was organized by Bangalore Mountaineering Club.  As KP is only open for certain seasons, it is in demand among the trekkers. And this was the first time post monsoon that the gates for KP had opened. Unlike other trek destinations of Western Ghats like Kudremukh and Mullayangiri, KP is more demanding right from the word go!!

A Mapping of the Kumara Parvatha Trek

We were a group of 40 ( 36 participants and 4 BMC cordinators ). The trek was organized by Bangalore Mountaineering Club.  As KP is only open for certain seasons, it is in demand among the trekkers. And this was the first time post monsoon that the gates for KP had opened. Unlike other trek destinations of Western Ghats like Kudremukh and Mullayangiri, KP is more demanding right from the word go! 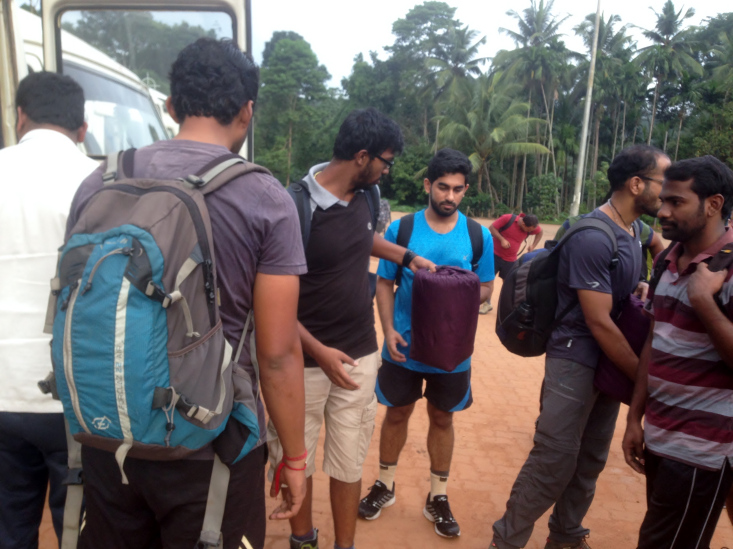 The entire journey can be divided in 2 parts –

With 4 litres of water each and sleeping bags on our shoulders, the trek started!
This stretch of 7 kms started in the middle of a jungle.  The trail was straight. This is not the kind of trek in which you will get lost. 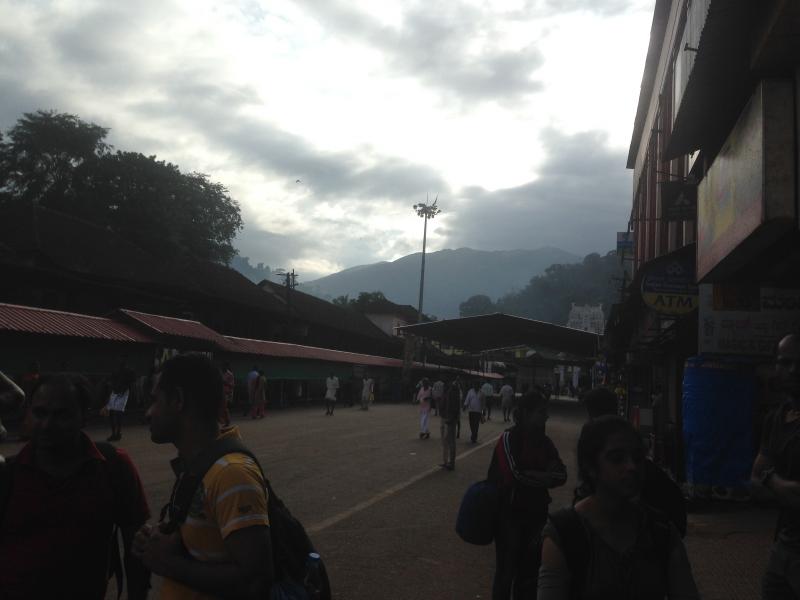 “You see those mountains acting as perfect back-drop to the Kukke Subhramaniya temple?
That’s the peak of Kumara Parvatha.”

And that’s where we were headed. 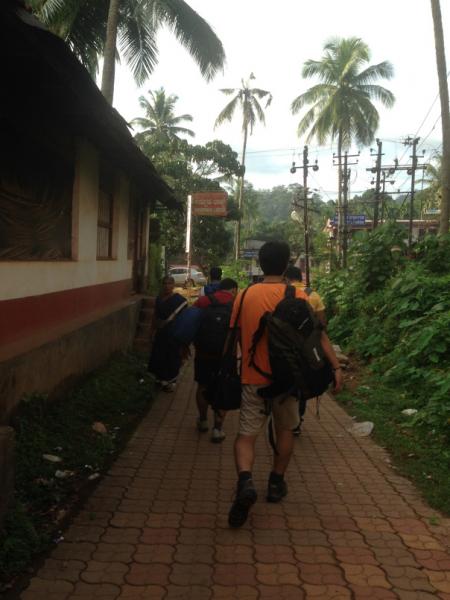 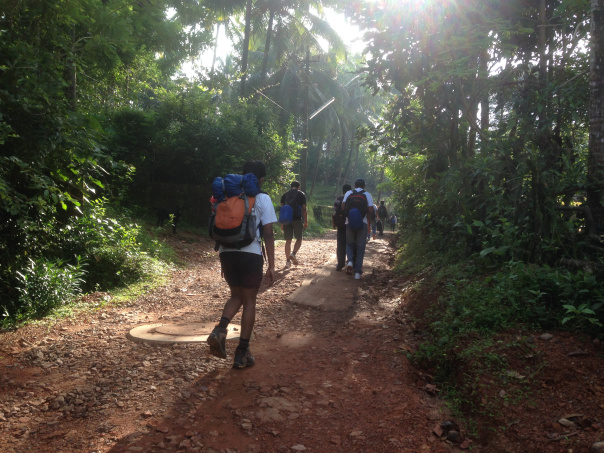 We started at 7 AM. The trek route starts just near the temple.

Most of us were geared up in Quechua’s. Since it was the toughest trek no one wanted to take any chances. Full range of trek gears like trek shoes, cargoes, bagpacks, leech resistants, water bottles, you just name it and our team had it. KP is quite confusing in terms of what to carry. You don’t want to be short of anything since it’s a long trek. And whatever you are going to carry, be ready to pay the price for each gram of excess weight in terms of efforts spent once you reach the later stages of the trek. 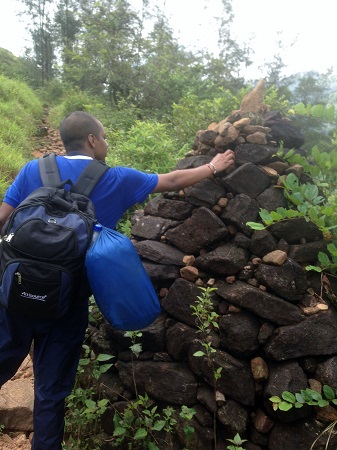 For every trekker these milestones along the way are a good way to rejoice. And that feeling of placing your stone on top of it is just amazing

And after walking, walking and some more walking one ends up witnessing some of the most picturesque landscapes of one’s life! 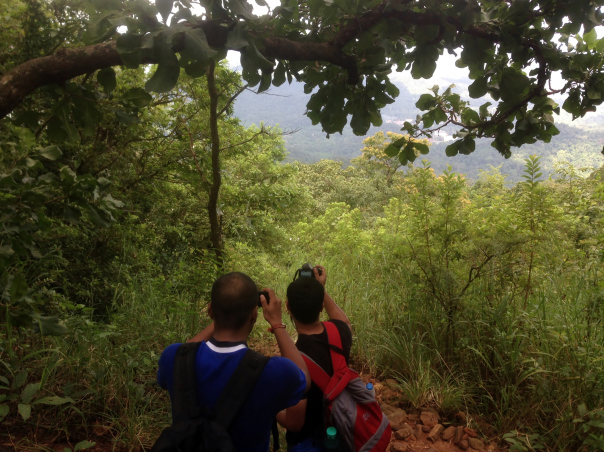 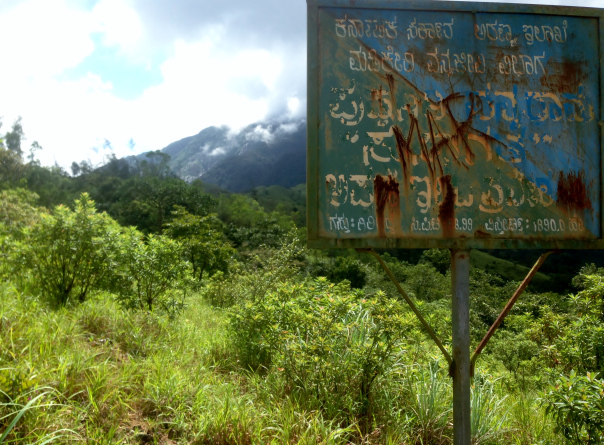 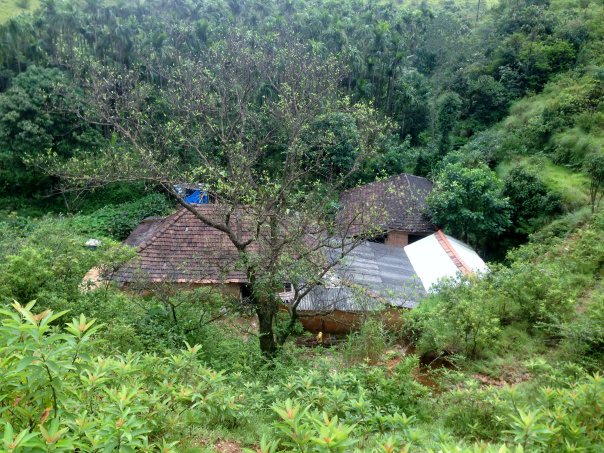 You see the hut in the back-drop of nature?
That’s Bhatar-Mane.

Now those who don’t understand Kannada language.
The word ‘Mane’ refers to a house.
Bhatar-Mane means Bhatar’s house. We will talk about Mr. Bhatar soon. 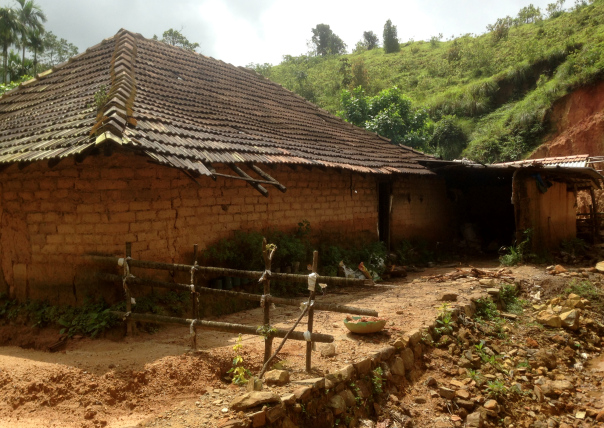 We were quite surprised to see a fully functioning house in the middle of nowhere. Inside lives Mr. Bhatar.  There was even a TV will satellite connection. Indian Channel Colors was being telecast on it.   There are wash-rooms on the inside as well on the outside. 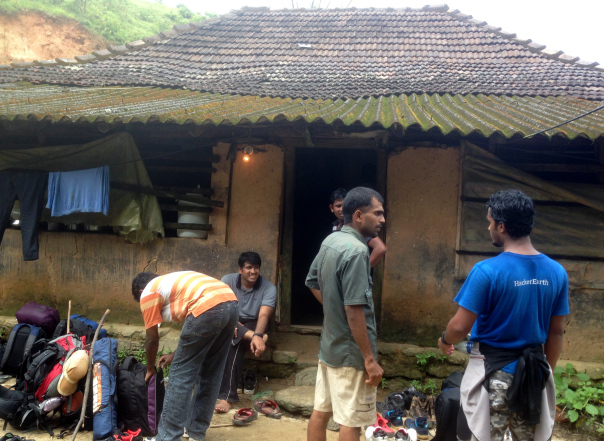 Do not expect hotel like luxuries here. But, after such an arduous trek, nothing beats the joy of a home cooked meal and a few smiles!

The best part of trekking is that it brings us closer. The way everyone behaves during treks is what defines them. In the outside world a person might be busy driving an Audi while being dressed in Armani. He might even be a CEO of some MNC. But when the same person is here, he will eat the same rice mixed in hot water prepared by Mr. Bhatar just like everyone else. 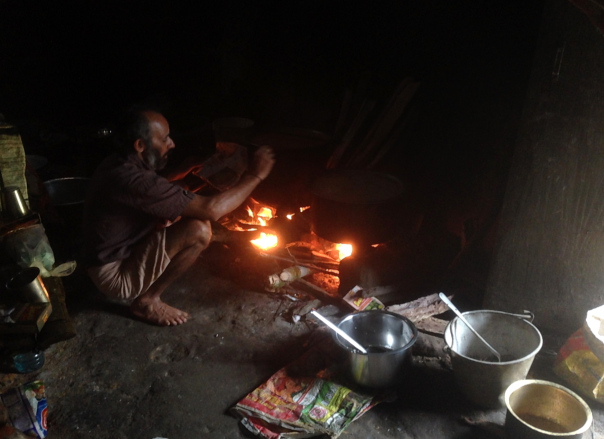 Now let’s talk about Mr. Bhatar. This person is the real superman. He gets rice for everyone from all the way down. Here’s an anecdote :

I : Sir, are you happy with what you have been doing?
Mr Bhatar : Absolutely. That’s the reason I am doing it.

I : *Still in shock, trying to recollect myself*
What’s the motivation behind doing such a great and tough job Sir?
Mr. Bhatar : It’s just Seva-bhav. (doing something for the benefit of people)
Money is nothing. There is greater joy in seeing smiles on people’s faces.

That was it. We saw a glimpse of Kartikeya in this man…

Then he asked me about my roots. I told him about Chhattisgarh. At first he didn’t believe that I was a trek-coordinator. There were two reasons for this : I knew only 2 words in Kannada : “Kannada Gothilla” and that means “I don’t know Kannada”. The 2nd reason was the fact that I didn’t look like a trek cordinator.  In the end he blessed me for  the journey of life. 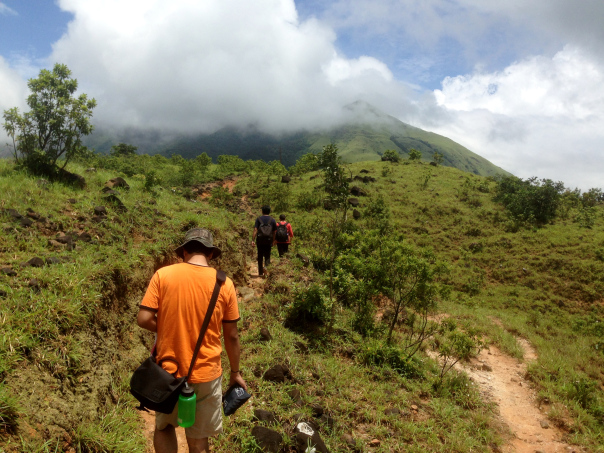 After having lunch at Bhatar-Mane and the deliciously made “Butter Milk”, we walked with fresh vigor for the 2nd half of the journey.

“They said KP is tough
But no one told us that it’s gorgeous.” 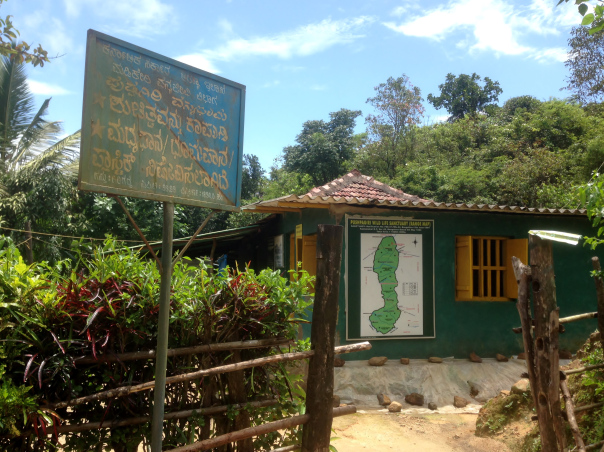 Climbing to the summit

When we trek, we get closer to nature.
Nothing brings us as close as trek does. Trek is not just a good exercise for the leg muscles but it helps you to unleash the photographer in you!

It was towards this end when our bodies were being tested. When you have already walked for more than 12 kms and you meet someone along the way who tells you “Another 4 hours from here”, your body wants to cry for respite.

When your body has totally given up but your determination has not, you say
“Let’s just walk for Nature’s sake. 4 hours is nothing. Let’s try summiting in 2 hours”

“Don’t sit when you are tired. As the more you sit, the more your body wants to relax. If you want to energize yourself, just relax for a while as the athletes do by bending yourself and shifting your body weight in forward direction “

This was told by one of the trek coordinators, Mr. Rajesh Shivakote during the briefing before the trek. And it really works! 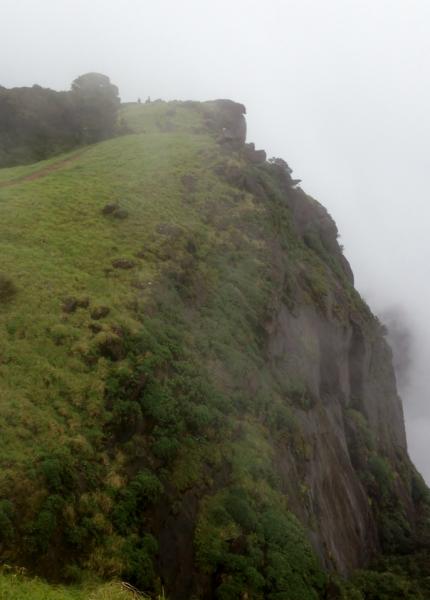 According to Hindu mythology : Vasuki, the divine serpent whom Lord Shiva used to wear as an ornament around his neck, did Tapasya around this region to save himself from ‘Garuda’.  Hence came the name of the mountains ‪’Shesha Parvatha’ ‬which resembles Vasuki, the serpent. It’s about 2 kms from the‪ Kumar Parvatha‬ mountains. 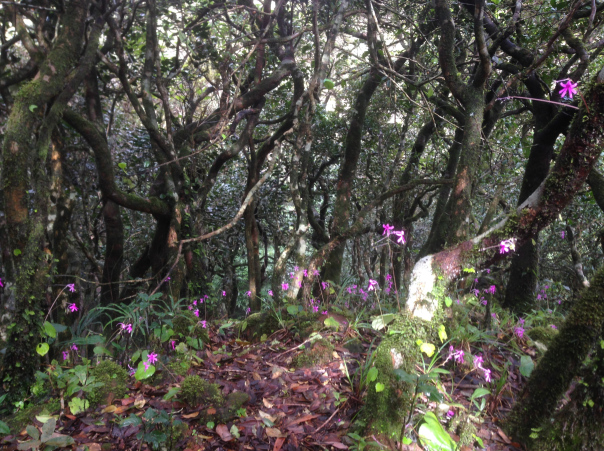 Out of the last 2 kms, to the peak . The 1st one was a descend into the Jungle. it passed through numerous streams. Now this was the most challenging part of the trek. You see an incline of 60 degrees with a stream of water flowing down. You have already walked for 12 tiring kilometers. And you see a wall of surprise. And then you see each other’s face and everyone is like “Let’s just do it.” 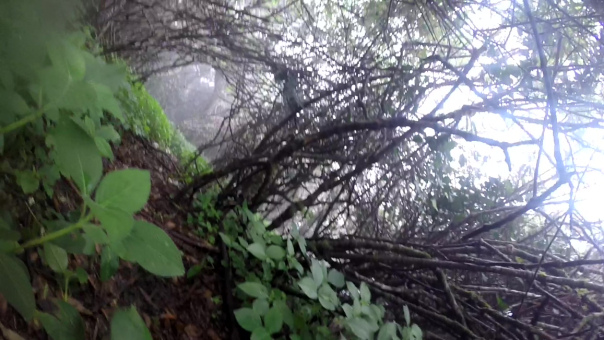 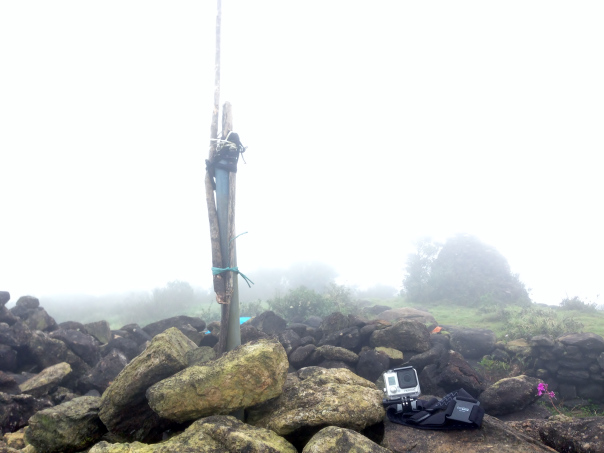 To make it to the summit is a priceless feeling 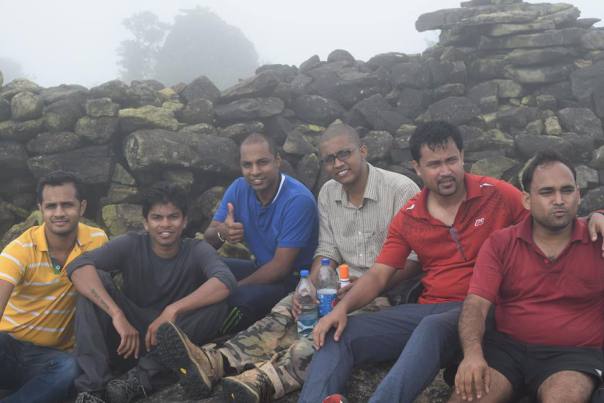 We needed each other’s company to motivate ourselves. We pushed ourselves to the fullest. We always knew about the fact that it’s gonna be the toughest trek that we have undertaken so far. It was more of a mental game than physical endurance. It’s like every moment towards the end, we all felt the pain. But still we didn’t stop…

We climbed the summit, we celebrated but we didn’t litter.

Did we find Kartikeya ?

Ye we did. We found him in the form of Mother Nature which gave us shelter. We saw a glimpse of him in Mr. Bhatru who is doing an amazing favour for people like us by providing food and shelter in the middle of nowhere.

The content and the pictures may not be used without the author’s prior permission.

Places to visit in Kukke Subramanya