Kolkata - the Cultural Capital of India is a heaven for foodies and especially for people with a sweet tooth. Bengali sweets are famous and certainly needs no introduction, however; the spicy, tangy and absolutely mouth-watering street food of Kolkata will leave you undecided on whether you like the spicy Bengali cuisine more or the melting flavors of the sweetmeats. Add to that the traditional Chinese and Tibetan food that are found here and you're spoilt for choices.

Here's a list of 20 best street food expriences in Kolkata - 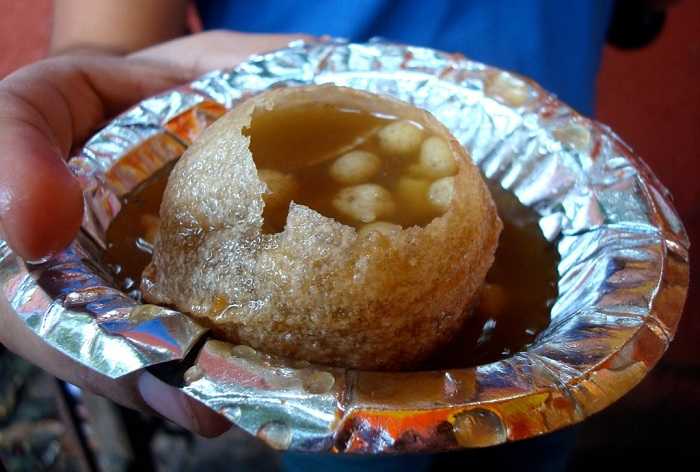 If there's some place in Kolkata where each and every phuchkawallah makes a phuchka to die for, it is this. Among other Kolkata street food, the papri chat, dum aloo phuchkas and dahi phuchkas here are to die for! On a good day, you might be able to spot a Tollywood celebrity or two lined up for these tangy mouthfuls of heaven. Maharaja Chaat Centre, Southern Avenue is your go-to place here. Churmur, a cousin of the phuchka family is another delicacy too hard to resist. Combined with tangy masalas, tetul gola (tamarind pulp), mashed potato and broken papris, churmur is simply heavenly. Bhawanipore is another must-visit place for good, nay, GREAT phuchkas and street food. 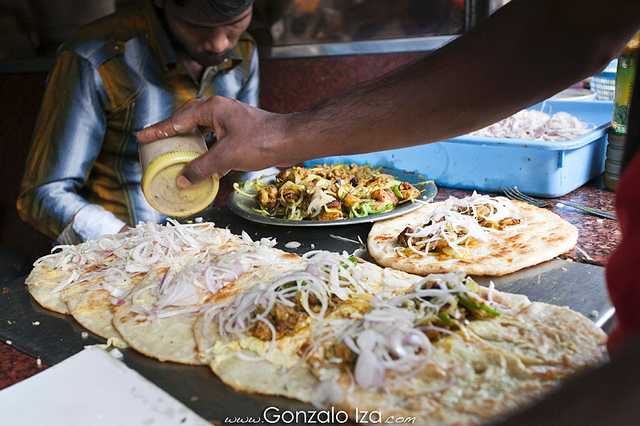 Did you know the now famous 'Kathi Rolls' were first invented in Kolkata? This shop called Zaika owns the credit to the delicious stuffing wrapped in thin roti that is now found in every city. Though there have been variations and twists as it found its way across cities, the original and authentic Kathi Rolls can still be found at Zaika. For more lip smacking? rolls, try Nizam's and Badshah in New Market and Kusum's and Hot Kathi Roll in Park Street! 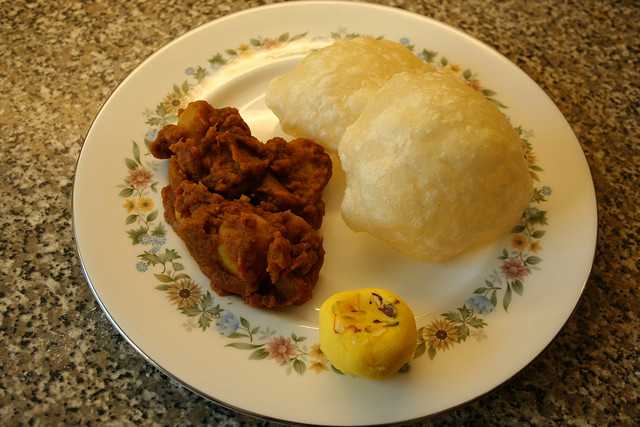 Fairlie Place is the central business district of Calcutta and you can see people in formal attire pacing the street either on the phone or with a newspaper in hand. The street is filled with a string of stalls selling everything from chats to full meals. However, the most famous dish here is the Luchi - Alu Dom. Luchi is similar to the puris while Alu Dom is the Bengali rendition of Dum Aloo, and Fairlie Place makes it the best. You can also try Kachoris and Rice and Fish curry. Name any sweet, and the chances are that you'll find it here. The Stock Exchange road is a great place to find Chilla, Dal Pakori and Dahi Chaat. 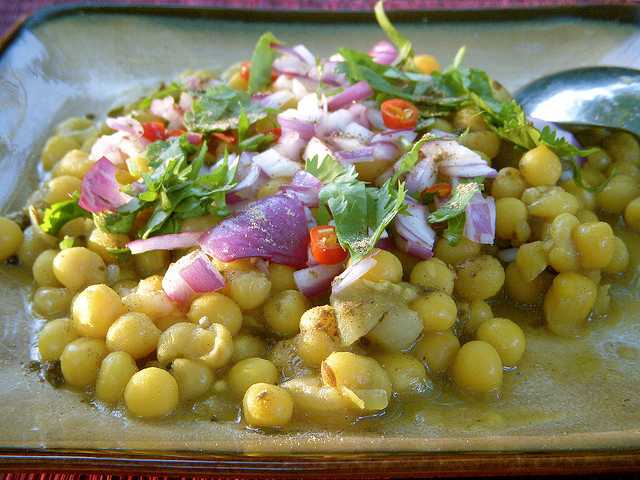 One of the most popular food of Kolkata, Dacre Street, also known as Decker's Lane has everything you would want to try. From Punjabi to Chinese and the trade mark Bengali dishes, you'll find it all here. Chowmein, Schezwan chicken, luchi-alu dom, fish roll, Ghugni, Puchkas, Jhali Muri and the list just goes on.What'ss more, the WHO has rated the food here to be one of the Best Street Foods in the World! 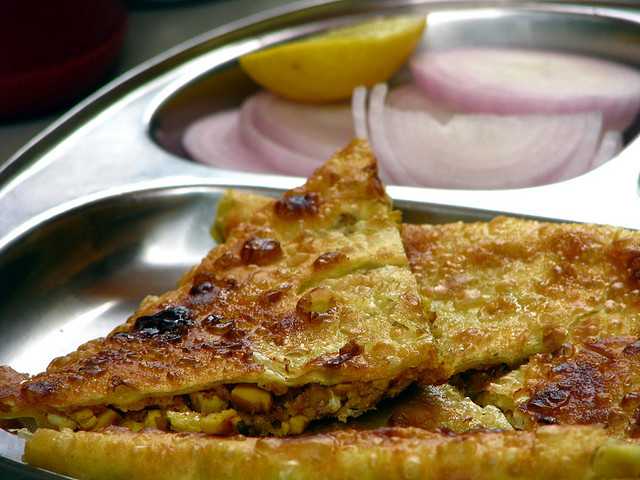 Rotis stuffed with generous amounts of Chicken Kheema or broken cutlets, onions and eggs, this is the speciality of Anadi Cabin - Mughlai Parathas. Thoughyou'lll find versions of the same in other places in Kolkata but Anadi Cabin serves some of the best and also cheaper Moghlai Parathas. These paranthas add a totally different flavour to the Kolkata street food cuisine! 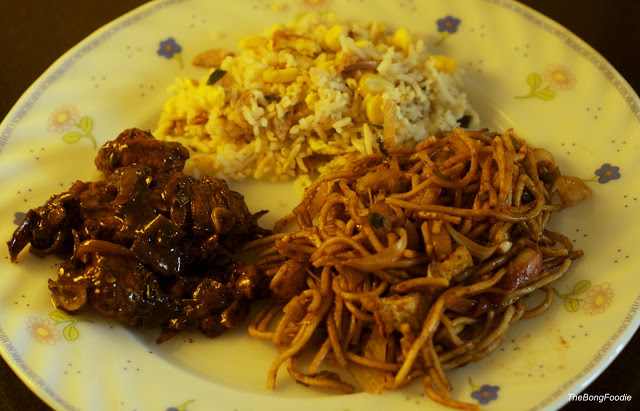 Once home to 20,000 Chinese has now drastically declined in number, however, it has not lost its food culture yet. Authentic Chinese with all the traditionally cooked food lures people from all over- especially during the Chinese New Year when the place is decorated with Chinese hangings and little dragons on the shops and houses. Chinese Breakfast consisting of rice dumplings and soup is the most sought-after Chinese preparation while one can also find the Indian version of Chinese. However, you've to be an early bird for this one. Visit the place no later than 5.30 AM, stocks last till about 6.30 or 7 AM. You do know that thing about how offers last only until stocks do, right? 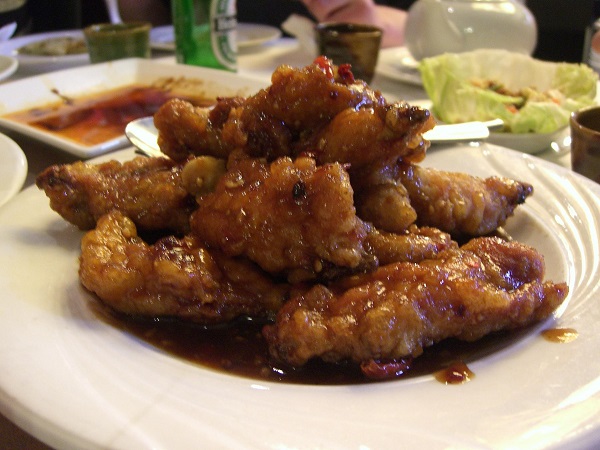 Right opposite South City Mall, are a slew of eateries that will take your breath away. Whether you talk about the local phuchkas, chaat, momos, sweet and savory shops, bakeries, or shacks selling Chinese food, there's nothing to not be loved. Watch out for a certain Dragon Chicken from the smaller establishments while you're on this stretch. 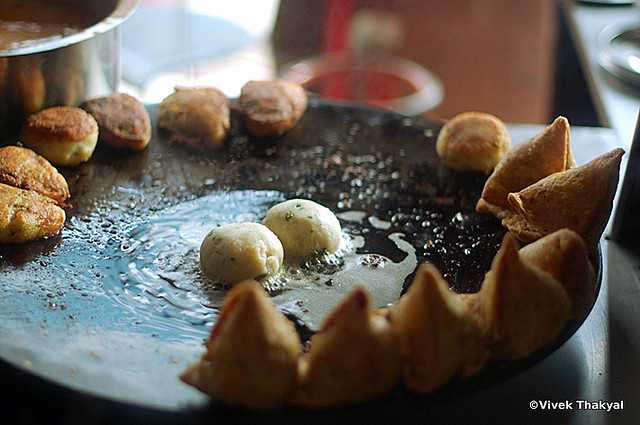 If you prefer tea over coffee, then head to the Tiwari Brothers for some 'special chai' and hot piping samosas only they are Singaras here. Nonetheless, it's a fitting combo for the evening and tastes just as delicious. 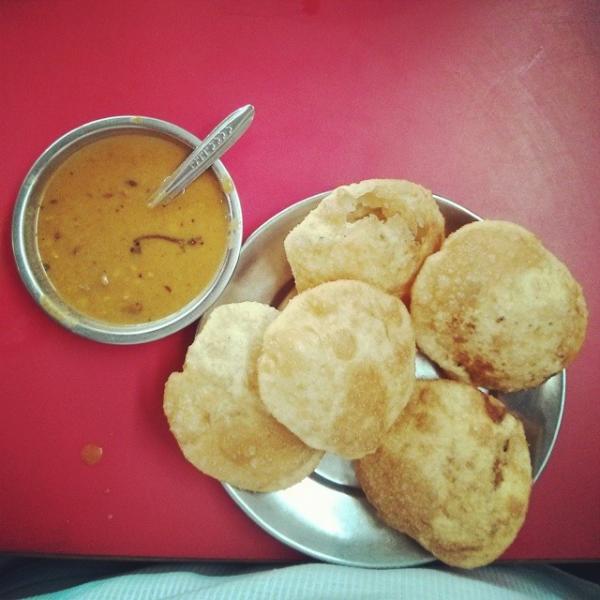 If you're in Kolkata, your Kolkata Street Food experience will be incomplete if you don'tt have Kochuri! The Kochuri or Radhabollobi, is one of its kind at Ganguram'ss. To finish, simply wash it down with some amazing Mishti Doi, or treat yourself to their sweet nothings! 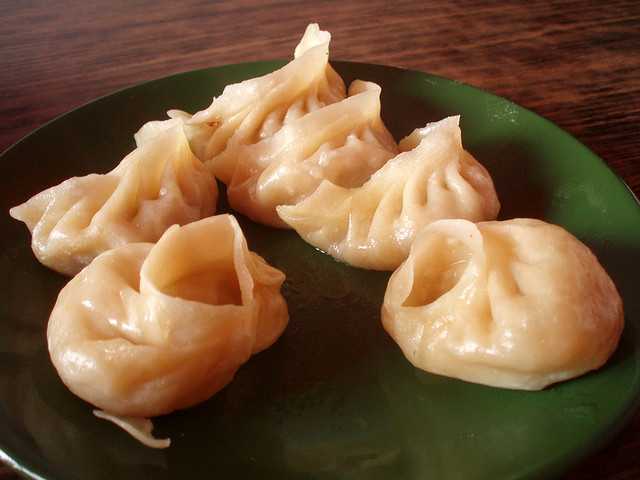 The Tibetan cuisine has always been a favourite in Kolkata, and Rabindra Sadan Metro Exit is one of the best places to have these amazing dumplings. Momos here are served with a piping hot soup and the perfect sauce for accompaniments- the very definition of comfort food! A line of little establishments dot this area and they are always flocked by students and office goers in large numbers. The momos here are breathtaking, and the low prices will leave you amazed and craving for more! 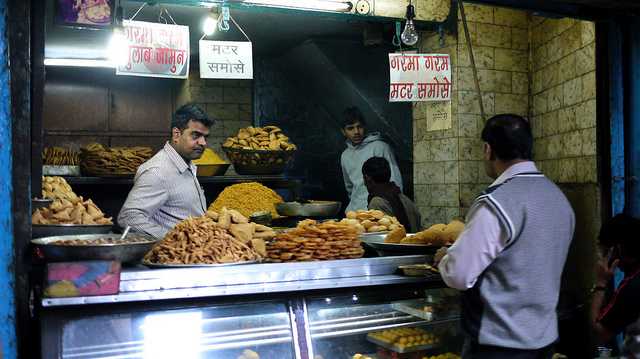 An almost 50-year-old shop has made its name of selling the best Telebhaja in the city. Telebhaja is deep fried snacks and you can find everything from brinjal fries to fried fish, egg chops to mutton chops and all of these sell out in a couple of hours. They are open only in the evenings from 4 PM to 8 PM and has people fighting to place orders, if you go after 7.30 PM chances are you'll have very fewer options to choose from. Gariahat and Fairlie Place are other favorite destinations for the Bengali's favorite telebhaja! 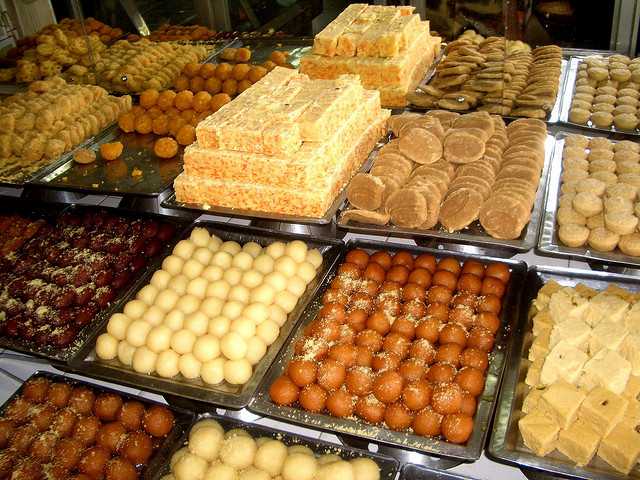 The dripping Roshogolla, thick Misti Doi, innumerable varieties of Sandesh, mouthfuls of Rasmalai, unmatched Rajbhog and the sweet Payesh; it is impossible to come to and not head for a sweetshop. Though these sweetmeats are found practically everywhere in Kolkata, Balaram Mullick and Radharam Mullick are nothing short of a brand when it comes to sweets in Kolkata. You've not Kolkata Street Food until you've visited this amazing sweet shop. The fusion sweets, along with the traditional crowd favourites are ones to die for. Besides this, KC Das, Girish Chandra Dey and Nakur Chandra Nandy are worship places for Mishti when it comes to Kolkata! 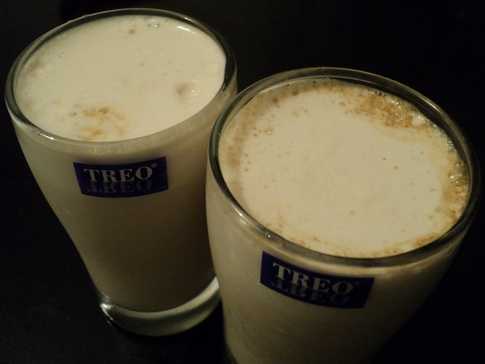 Kolkata's culture of Tea can be aptly observed by just one visit to this historical place. While their tea, which comes in different 'bhaanr' (earthen cup) sizes is the absolute best, this isn't the only reason why Balwant Singh Eating House is so well loved. A unique offering called the doodh cola is available here, which is cola married to milk in a most joyous union. One of a kind! 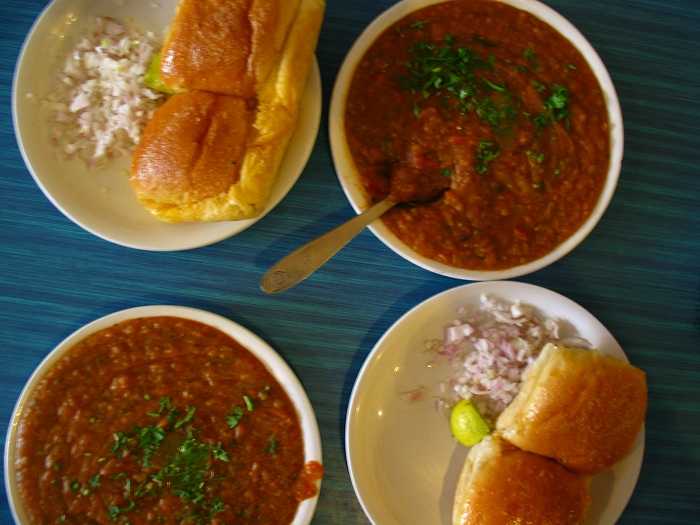 If you have a pav bhaji craving while you're in Kolkata, this is where you should be heading to! Mayaram's makes one of the best pav bhajis in all of Kolkata. If you're crossing the shop on your way, I assure you, you can't go on without surrendering to the charms of a plate of the most fragrant, paradisaical pav bhaji! Note: While you're on Lord Sinha Road, try the gola, or chuski, as it is more fondly known and the soda shikanji. They are served in sizeable earthen glasses and are absolutely great on a Kolkata afternoon, before and after those shopping sprees. 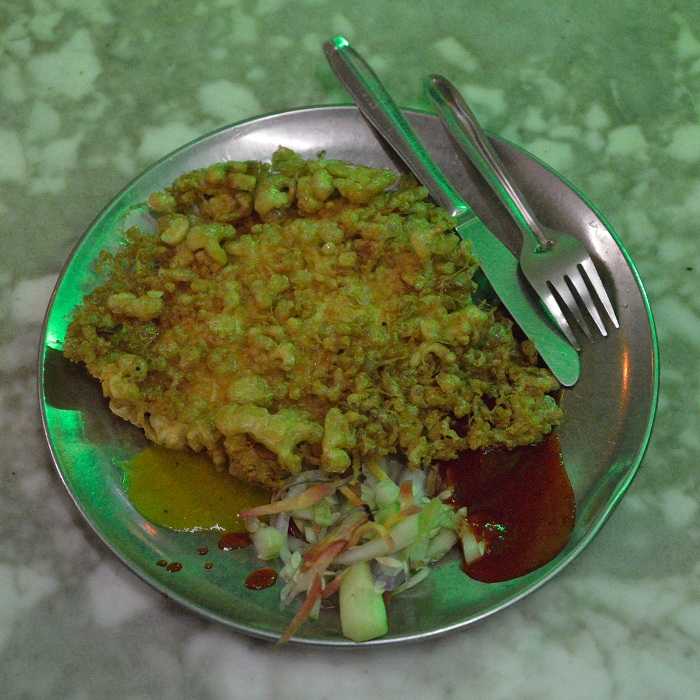 Like non-veg food? Head to Mitra café. Period. The Mutton Kabiraji cutlet here is to die for. Literally, die for. It's a filling of minced mutton wrapped in an egg net and deep-fried and is the very definition of a foodgasm for any non-vegetarian foodies! Moghlai Parathas, Fish chops, Fish fingers, you name it. Rolls of every kind that you can think of are available here and NONE of them disappoints. Heed my advice, go here with an empty stomach and walk back full, because you'll need to burn off some of all that you stuffed! 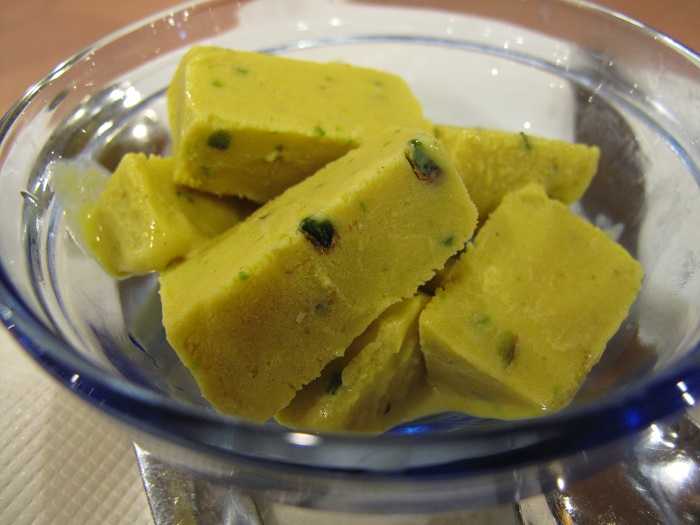 Did you really think Kulfis come in a regular shape, taste and size? Then you surely haven't visited Camac Street's most amazing Kulfiwallah! This person, who is found on Camac Street, somewhere between Pantaloons and St. Xavier's, has the most low key establishment and he keeps a box of dry ice near his basket of yum to stuff his delectable kulfis in. The close proximity to a lot of colleges ensures a steady flow of yummy street food at all times. We pick the Mango, Sitaphal and the Cheeku kulfi to be our favourites. 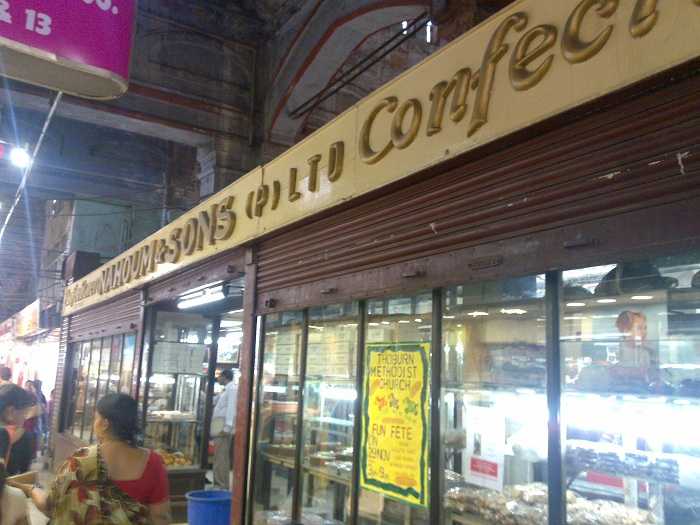 Food hopping? Missed New Market? Kolkata Street Food hopping isn't complete! Both the vegetarian and non-vegetarian street food here is awesome, with a little smattering of branded retail food joints like the Cream and Fudge Factory, KFC, Dominos and WOW Momos being present on either side. The phuchka and chat are drool-worthy, desi Chinese food like Chopsuey and Schezuan chicken (questionable spellings, awesome taste) and not to forget the delightful bakeries around. Try Nahoum's for a few bites of heaven in the form of baked goods! Try the lassi, the ice-cream that costs Rs. 6 (Yes! That exists!), the south Indian fare and the various kinds of milkshakes and juices. New Market is a haven for cheap food and a truckload of joy. Vardaan Market, being at the heart of the business district of Camac Street, is home to some of the best vegetarian delicacies that you can find in Kolkata. Try phuchkas from vendors near Westside and Pantaloons and Marwari delicacies like the Chilla, Daal pakori etc. at Vardaan Market! 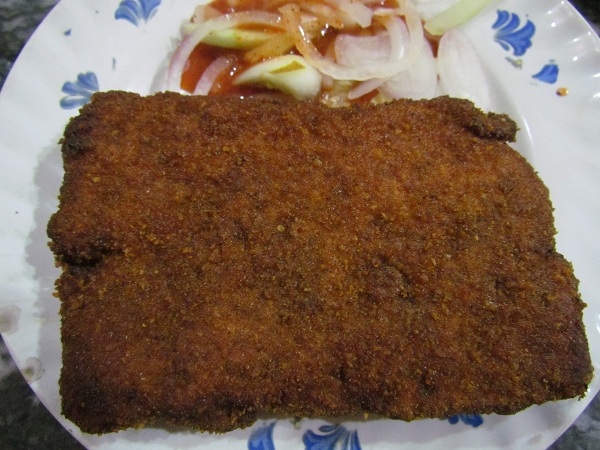 Fish Fry is one speciality of Kolkata that I'm still wondering why Gourmet cuisine hasn?t discovered yet. At Golpark 5-point crossing, on the Gariahat Side, is a small shop that sells the most amazing fish fries ever. Try their butterfish fry, which is a speciality, and you will be a fan. 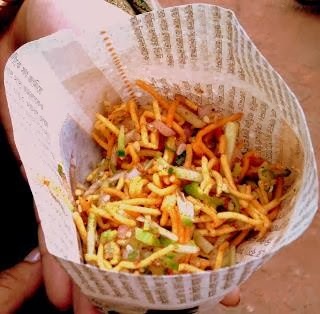 The honest-to-God, awesome union of chanachur, lemon juice and onion, is the Kolkata Street Food to have when you're at Princep Ghat, walking along the river in all its serenity. That said, tea and all kinds of snacks at Princep Ghat are to die for and not to be missed.

Places to visit in Kolkata

View 79 places to visit in Kolkata

16 Best 5-Star Hotels in Kolkata for a Perfect Stay

21 Resorts in Kolkata for an Unforgettable Stay

12 Breakfast Places in Kolkata for Your Early Morning Hunger Pangs

Kolkata's Cafe #377 Opened its Doors Last Month, With The Message of Equality and Unity

Romantic Places in Kolkata To Go On A Perfect Date

8 Festivals in Kolkata That You Must Experience!

Things to do in Kolkata: Exploring the City of Joy

Amazing Amusement Parks in Kolkata for a Funtastic Day

One Day Trips From Kolkata | One Day Outing Near Kolkata

Art Galleries in Kolkata for All You Art Connoisseurs

Kolkata to Bhutan : How to Get to Bhutan From Kolkata

Places to Visit near Kolkata Within 100 Kms

Places to Visit Near Kolkata

Places to visit near Kolkata under 200kms

All You Need to Know About the Kolkata Botanical Gardens

Did You Know There Is A Temple For Amitabh Bachchan In This City?

Gurudwaras in Kolkata to Seek Blessings and Find Peace

Gorgeous Parks in Kolkata for a Day Amidst Nature

Water Parks In Kolkata To Make The Most Of Your Summer!

Spectacular Temples in Kolkata for a Spiritual Getaway

Popular Stadiums in Kolkata for All You Sports Geeks

Trams in Kolkata - All About Asia's Oldest Running Trams

12 Breakfast Places in Kolkata for Your Early Morning Hunger Pangs

Kolkata's Cafe #377 Opened its Doors Last Month, With The Message of Equality and Unity

Romantic Places in Kolkata To Go On A Perfect Date

8 Festivals in Kolkata That You Must Experience!