What is the best time to visit Kerala?

September to February is the best time to visit Kerala when it is relatively cooler. While summers (March to May) make the state too hot for comfort and the monsoons (June - August) can receiver downpour that can heavier than imagined and is not entirely advisable to all tourists. But for some, it can be a beautiful amalgamation of festivals, scenic views and the much talked about Ayurvedic treatments.

Kerala in Summer (March - May)

The summer season begins in the month of March and goes on until May. The day-time temperature hovers around 38°C and can reach a staggering 40°C during the peak afternoon. The mercury level drops in the evenings but still remains around 29°C which might not be comfortable for some. The coasts get extremely humid, making it a sweaty affair for the beach lovers. Summers, therefore, are not always recommended to travellers wishing to explore Kerala. There is a plus side though. The rates really slash down and wouldn't pinch one's pockets.


While there, tourists can catch the traditional festivals. The Painkuni Festival is celebrated in the month of March/ April. It is dedicated to Lord Padmanabha. Ambalapuzha Arattu is also celebrated in the same month. One can witness the celebrations of Vishu, a festival that marks the beginning of New Year in Kerala. It is celebrated in April/ May. Easter, Kanathurkava Uthsavam, Thrissur Pooram and Lokanarkavu Uthsavam are some more festivals celebrated in April. So even if the temperature soars, there will be something interesting to see and experience.

July to August (sometimes till mid-September) is the season of monsoon in Kerala. Most regions of the state receive heavy rainfall, and the levels of humidity are at its peak. It gets an average annual rainfall of over 3000 mm, and the temperature hovers between 29°C and 35°C and the humidity is between 65 to 73%. Monsoons, therefore, is not quite the best time to explore. Some, however, do wish to visit the state for traditional Ayurvedic treatments that Kerala is famous for.
The backwaters are seen gushing to their fullest, and the temperature becomes pleasant & quite enjoyable allowing the offbeat traveller to explore the state to their full capacity. They can stay for a few weeks or months at one of the several nature resorts Kerala houses, but the torrential downpour won't allow tourists to explore much of the state. The terrain gets covered with dense vegetation, and there's only nature to accompany the one searching for some solace. During this season, one may also witness the festivals of Ramadan, Id-Ul-Fitr Kalampattu Festival, Feast of Our Lady of Snow, Feast of Martashmooni Amma, Pongal which are some of the festivals celebrated in July/ August.

Winters begin in Kerala after mid-September and go on till February. The temperature and humidity drop down during the season, making it an enjoyable time to explore the attractions in the state. The lowest temperature the state experiences is around 10°C whereas the highest is about 25°C. As one travels towards the coast, the temperature remains moderate (approximately 27°C) through the day drawing more people to the shores or the backwaters for boating, houseboat cruises, beach exploration, sunbathing, water sports and ayurvedic massages. It is also the best time to head to one of the sanctuaries for a wildlife safari or go sightseeing around the state. Some of the most visited places in Kerala during this season are Munnar, Alleppey, Varkala, Kozhikode and Kovalam,

While there, one might want to witness the festive celebrations of the state. Muharram is celebrated in September to mourn the martyrdom of Prophet Mohammed?s grandson, Imam Hussain. Grand processions with Taziyas can be witnessed as followers mourn. October/ November brings Navaratri, Dussehra and the festival of lights, Deepavali. Christmas is celebrated in December. The Churches glimmer with bright lights and masses & celebrations are held all over the state to mark the birth of Jesus Christ. In February or March, Mahashivratri is celebrated by the devotees of Lord Shiva. The Bharani Utsavam, Chittoor Konganpada, Guruvayur festival are also celebrated with great enthusiasm during this time of the month.

Best time to vist the Top Destinations in Kerala

The Kochi Muziris Biennale, a significant art exhibition of India, is set around different areas of Kochi including galleries, heritage buildings, public parks, halls, and other spaces. A mix of Indian as well as international artists, all with very different experiences in art, come together to present their artworks in the form of films, paintings, photographs sculptures, sketches, fashion exhibits, music, dance, drama and many more. These exhibits are carefully curated by different professionals every year. Running for three months, every alternate year, Kochi Biennale is now its fourth edition.

Largest and most famous of all Poorams, the Thrissur Pooram is held at the Vadukkannathan Swamy temple of Kerala every year in April - May. This annual Hindu temple festival of Kerala is held for a week in the month of Medam according to the Malayalam calendar.

Top Places to Visit In Kerala

View All Places To Visit In Kerala

Onam 2019 - An Essential Guide to the Festival of Kerala

Religious Places in Kerala For A Glorious Spiritual Journey 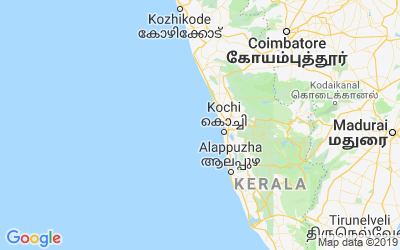