Fairs and Festivals in September in India: 2016 11

There are some amazing fairs and festivals happening in the month of September in India.

Take part in the Janamashtami or Ganesh Chaturthi celebrations or witness the grandest Ramlila in the world. You could also happen to take part in a marathon challenge in Ladakh or their annual festival celebration, the Ladakh Festival. Also, around this time of the year, India’s Greatest Outdoor Music Festival takes place in Arunachal Pradesh. Here is a list of Indian Festivals in September to help you mark your calenders.

Where: All across India 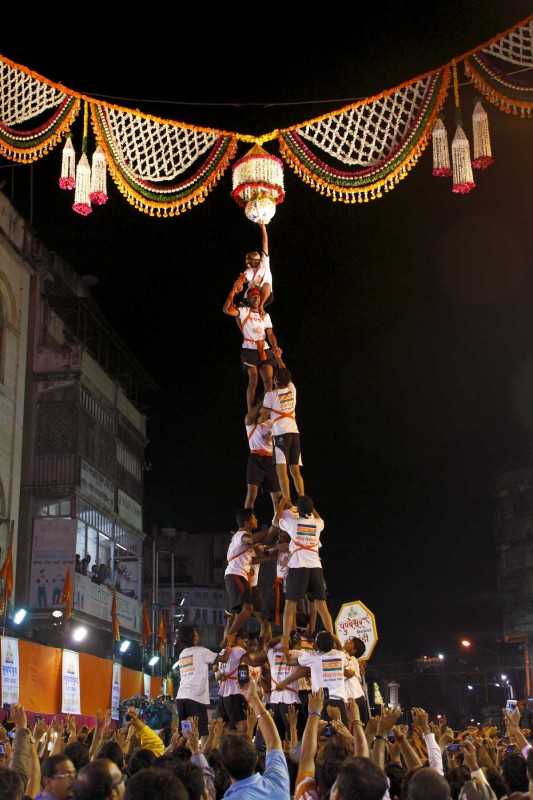 Janamashtami is the celebration of the birth of Lord Krishna. The festival is celebrated all over the country with great fervor. People fast and stay up until midnight as it is believed that it at that time that Krishna was born.

Janmashtami In Vrindavan and Mathura is quite famous. Ras-Lilas are enacted depicting Krishna’s life.

In Mumbai and Pune particularly, it is commonly known as Gokulashtami. The real action takes place in the localities where people form pyramids aiming at the dahi-handi as a mark of Krishna stealing butter.

People also visit the city of Dwarka in Gujarat where Krishna is believed to have established his Kingdom.

In Jammu, kite flying is an important part of the celebration on this day.

Read more about Janamashtami celebrations in Vrindavan and Mathura.

Where: In and around Leh 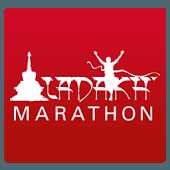 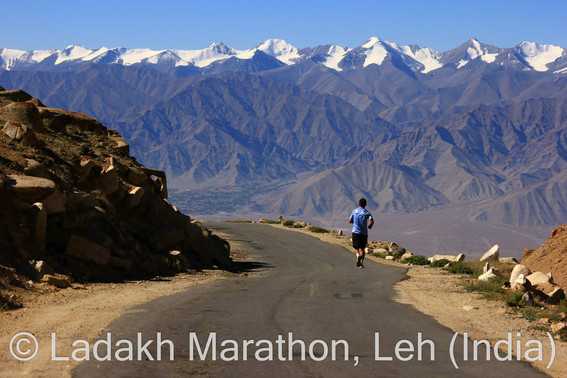 In its forth edition now, the Ladakh Marathon is a unique race that celebrates the beauty of Ladakh offering runners panoramic views of the valleys and rivers of the place. It consists of four races that cover Leh, Choglamsar village and Khardung village. Ganesh Chaturthi marks the celebration of the birth of Lord Ganesha. The festival is celebrated with great enthusiasm in Mumbai. Statues of Ganesha are installed across the city accompanied by much singing and dancing, and then immersed in the water bodies. During the festivities the streets are filled with devotees and lots of music. It is celebrated for 10 days, with the biggest spectacle taking place on the last day called Anant Chaturdasi day. 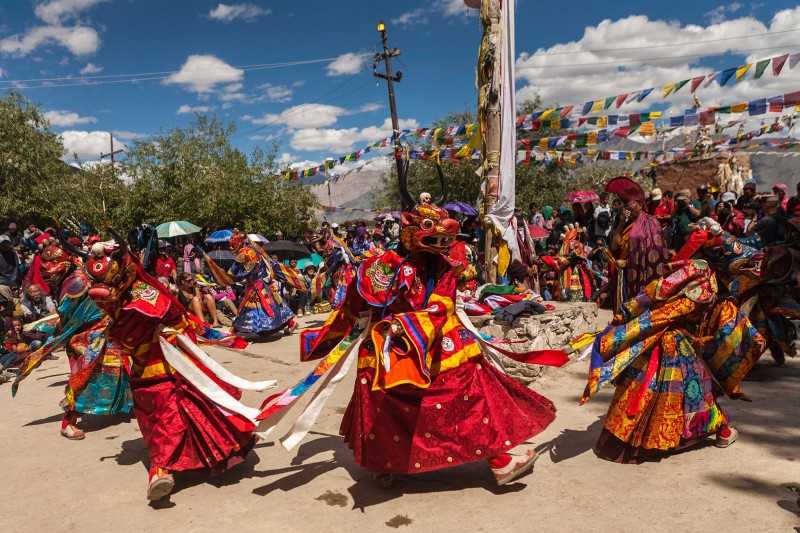 Organised by the J&K Tourism Department, The Ladakh festival is an annual fiesta celebrating the tradition and heritage of Ladakh. This year it is a weeklong extravaganza in various villages including processions, lion dances, yak dances, and sports including archery, rafting and polo. Is something still missing? Oh the fooood. Some mouth watering local delicacies to go along with the wonderful musical performances.

There ain’t no better time to visit Ladakh!

When: Last Week of September 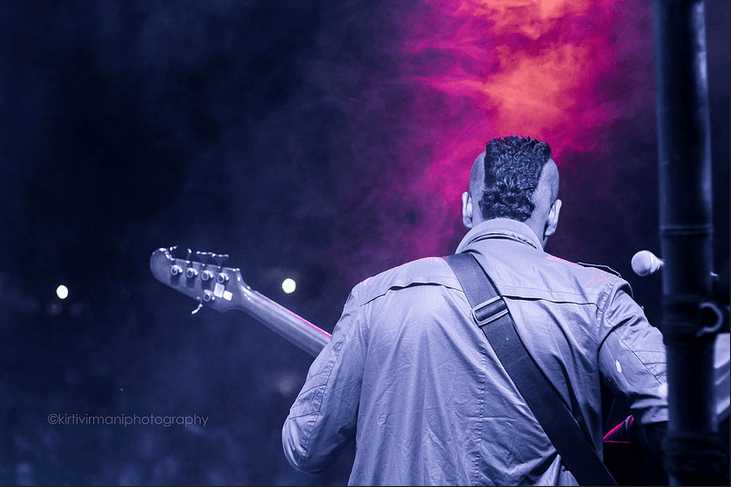 India’s most fun outdoor music festival, Ziro festival of Music showcases the most talented musicians in the North-East.

The festival takes place not far from Itanagar in the Ziro Valley, over 5500 feet above sea level surrounded from all sides by majestic misty mountain. The festival also aims to boost tourism and local music in the beautiful state.

Where: Ramnagar, 15 kms from Varanasi 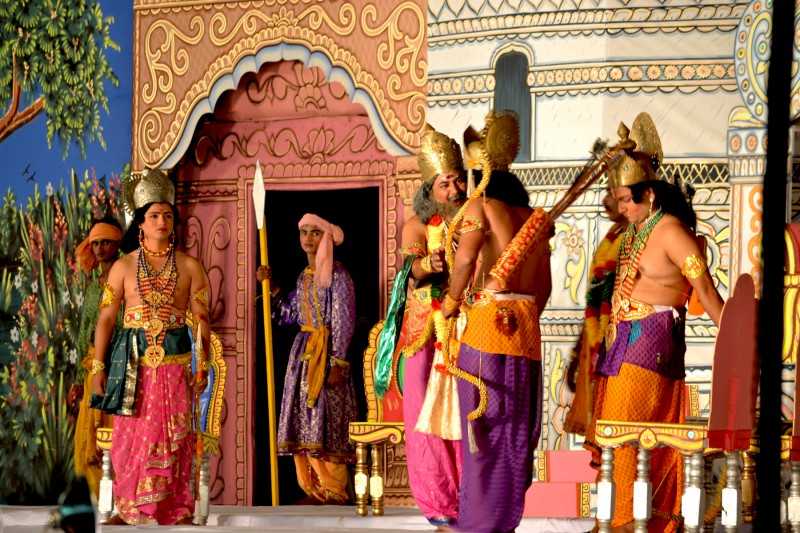 Ramnagar, on the banks of the Ganga, opposite Varanasi, was the capital of the former princely state of Banaras. It is now best known for its nearly-200-year-old Ramlila, the longest in the world. Started in 1830 by then ruler of Kashi Maharaja Udit Narayan, Ramnagar Ramlila is a coulourful spectacle which blends local tradition and mythology.

Permanent structures have been built and sites such as ‘Panchvati’, ‘Ayodhya’ and ‘Lanka’ are designed in various places in the town as described in the epic. Various episodes of the drama are enacted at different venues every day.

The lila is a giant mela, the streets are lined with chaat wallahs, people drink hot sweet tea or chew Banarasi paan. There’s also heavenly Ramnagar lassi, with crunchy sugar topped with a thick layer of rabri. The lila ends with an arti. 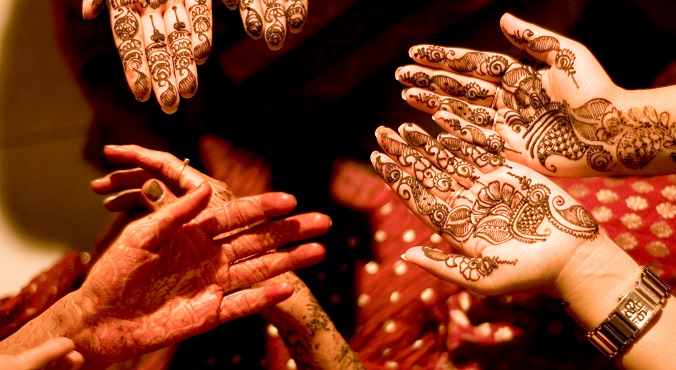 Teej marks the union of Lord Shiva and Goddess Parvati. Teej also celebrates the arrival of monsoon.
It is celebrated mainly in Rajasthan, Haryana, Punjab, UP and Bihar in varied forms. While ritual fasting is central to Teej, it is also marked by colorful parties, which include singing, dancing, henna tattoos and swings. Ghewar sweet is a specialty prepared during Teej. 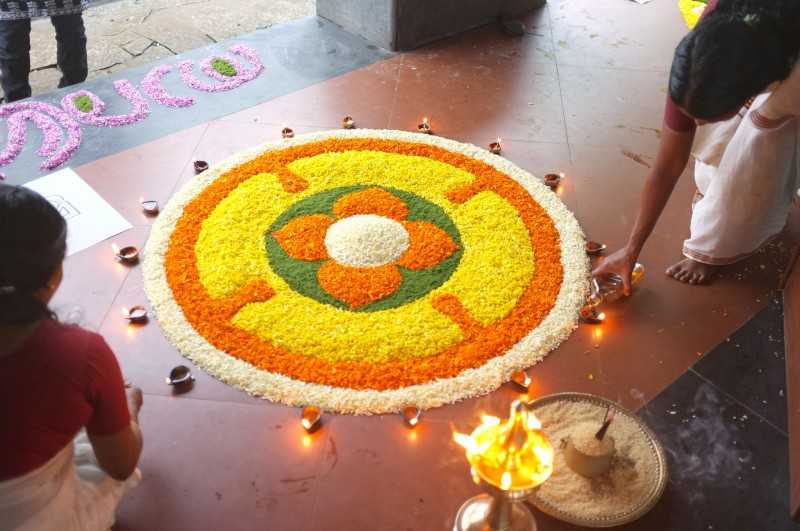 Floral carpets called as Pookalam are a tradition during Onam (Source)

Onam, the state festival of Kerala, is a ten day long festival- Atham is the first day and Thiruvonam is the final day of the celebrations, being the most important days. As per a popular legend, the festival is celebrated to welcome King Mahabali, whose spirit is said to visit Kerala at the time of Onam.

Kerala comes out in its best form and spirit during the ten day long harvest festival. Traditional rituals, lavish feasts, spectacular carnivals of elephants, fireworks, boat races, music and folk dance performances like Kathakali and Pulikali (Tiger dance) are all commonly associated with the festival. During Onam ‘Tourism Week’ is held by the State Government, showcasing Kerala’s beauty and culture.

Are you travelling this month? Here is the list of Best places to visit in September in India.