When Everything Stopped Making Sense, This Girl Went For Vipassana and Never Came Back to The City Life

In May 2018, when I was due to turn 26, I officially had my quarter-life crisis. The noise and dust everywhere, the metro rides, the predictable routine, hosting parties every once in a while to feel more human, and the sultry unbreathable air of the capital. The whole idea of a life where I didn't add much value to the world I was living in started getting to me. I was perplexed and unhappy and in desperate need of a fresh start. 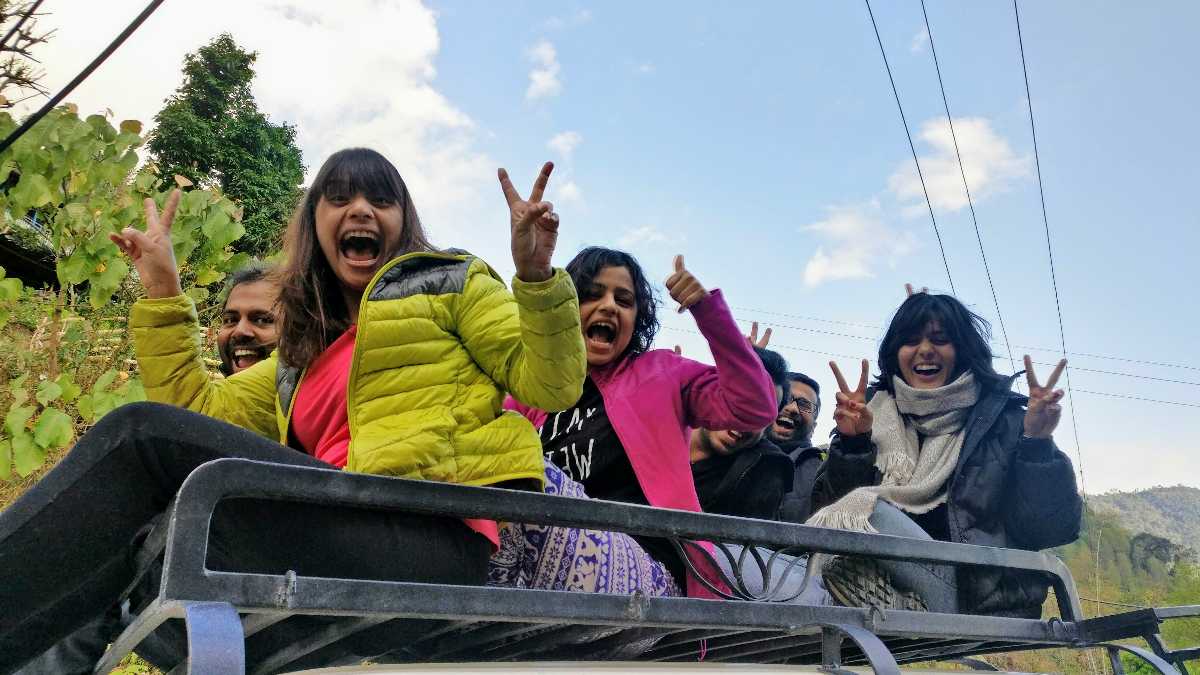 I quit my well-paying product marketing job in an e-commerce startup in Delhi in August 2018 after four years of work, when the paycheck had ceased to matter. Since I'd heard so many of my friends rave about Vipassana, I thought I'd give it a shot. I think more alluring than meditation to me at that point was the fact that they would take my phone away for ten whole days. I knew that I had to do the course in the mountains if I had to stay shut and keep my sanity for ten complete days. I ended up choosing a centre in Sikkim because the Ladakh centre was full. A Vipassana course starts and ends with you making friends with a bunch of new people, and as it happens in this tiny world, you end up finding and building lifetime connections. Once the course ended, I had some time to kill in Gangtok. Bhavana, who I’d met at the course said her sister, Manisha, was opening up a cafe, where I could get some coffee. I ended up going along, and in turn, found everything I wanted in my new life: a pretty little cafe, and the warmest hosts running a backpackers' hostel in a mountain town.
Bhavana asked me the very same day that they were looking for someone to volunteer, helping them out with running Instagram and revamping their website. I was sold. I was back in Gangtok in a month after I'd settled my affairs - ready to start a new life. 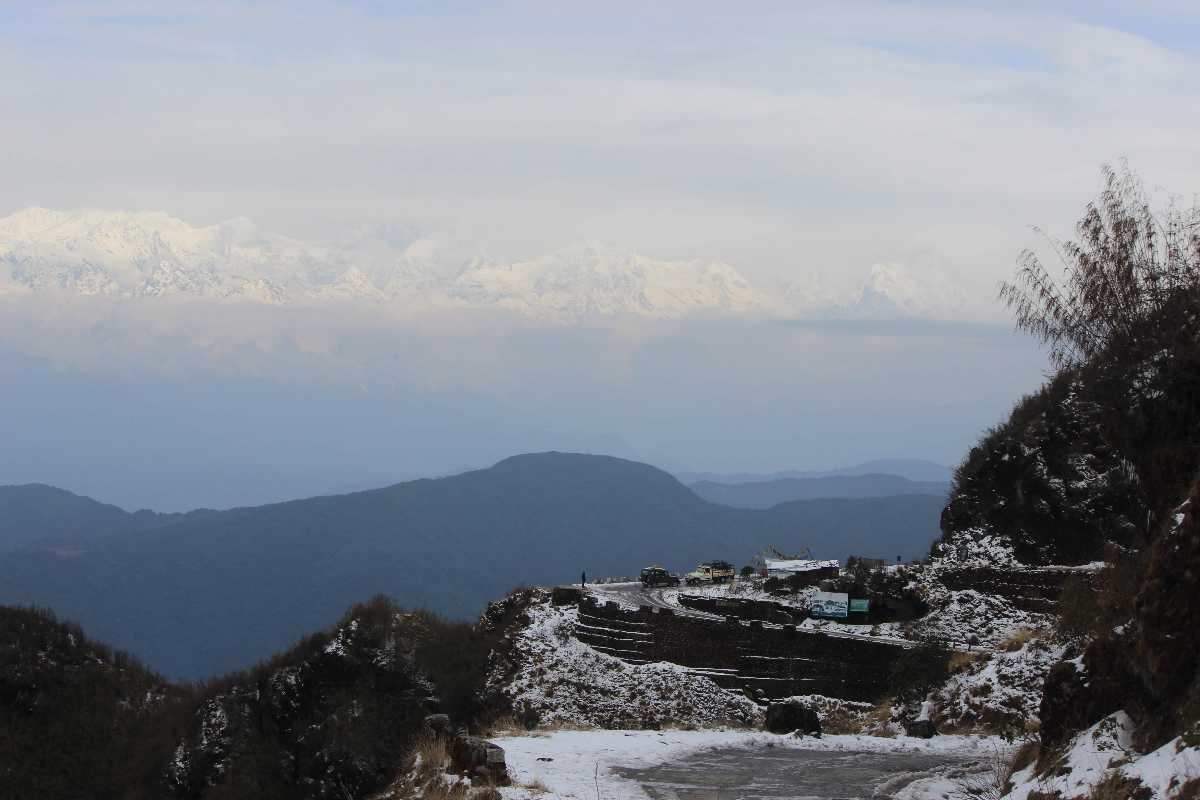 Manisha's in-laws, who live in the same building, took me in as a daughter, and I was delighted to have a family in the hills. I started calling my new set of almost adoptive parents Ama and Baba, and Abhimanyu da and Abhinandan became like brothers to hang out with, take advice from, and joke about silly stuff. Bhavana had turned into a soul sister. We would be up for nights talking about the before and after of our lives.
With some of their help, I started picking up Nepali. It started with the pleasantries, and six months later, I could (almost!) hold a conversation with a stranger in Nepali! Thanks to having a new family, I got treated to all kinds of delicious home-cooked local food, learned new recipes, travelled around Sikkim, understood a bunch of socio-political patterns, and most of all, made the mountains my home.

Volunteering In The Mountains - Tag Along 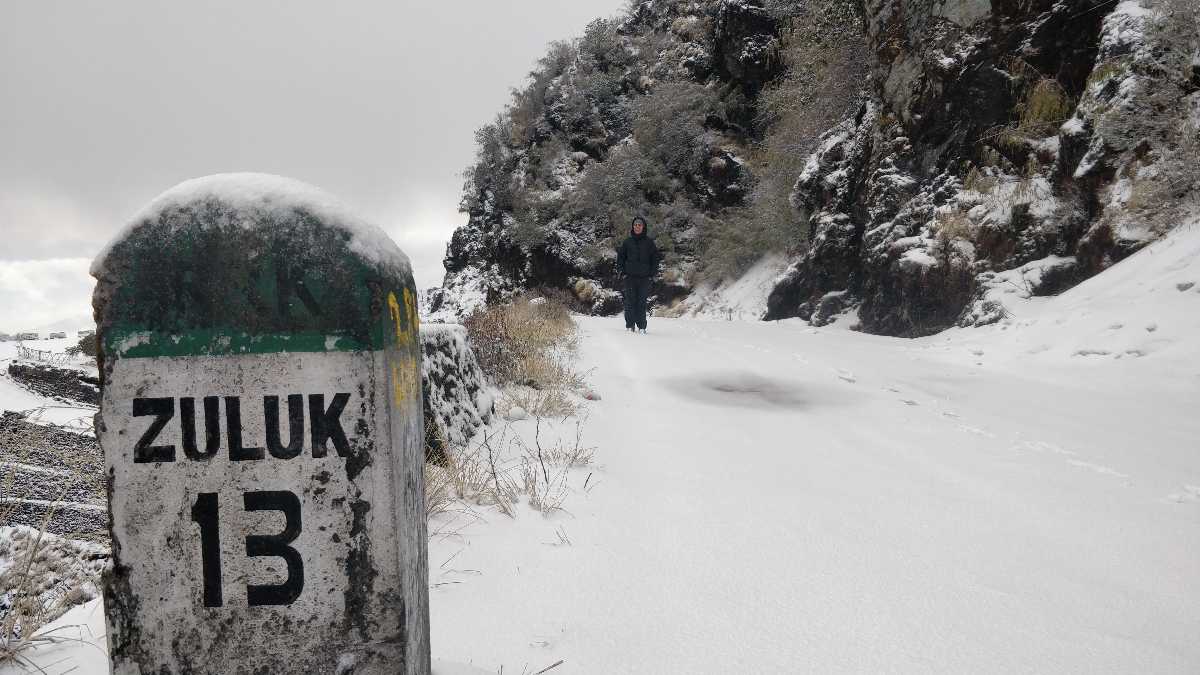 I lived at the hostel - Tag Along Backpackers and worked at the café - waiting tables and accounting, strategising and redesigning the hostel’s website, brand identity, and helped strategise online content. I thoroughly enjoyed everything about volunteering in a backpacker’s hostel, closely observing all the patterns of travel that I had only written about from my various travel content jobs.
At Tag Along, we’d organise potlucks with our guests, trying dishes from several parts of the globe in one meal, listen to travelling musicians and poets, draw with artists and generally live our best lives.

Travelling In An Unknown Sikkim With all due respect to famous locations anywhere, they just don't float my boat. The crowd, the Maggi-momo shops, the "Arrey, photo le na meri Lake ke saath!" drives me nuts. Just my luck, Manisha di had worked in remote Sikkim, training families to become homestay hosts. I had the good fortune of roaming in villages, walking through forests and paddy plantations, drinking local millet beer, eating home-cooked meals, eating oranges straight from trees, dancing in the snow, and swimming in springs and waterfalls. I have been awestruck by the Kanchenjungha every time I saw it.
Here are some places that you should add to your travel map if you ever add Sikkim to your list:
East Sikkim: Zuluk/Gnathang, Aritar, Rolep
West Sikkim: Yuksom, Yali, Khecheopalri
North Sikkim: Dzongu, Lachung, Thangu
South Sikkim: Temi tea estate, Yangang

I was once at this little village called Tingvong in North Sikkim. The only place to access any mobile network is on a rock (lovingly called the 4G rock) that faces the Kanchenjungha. If you're perched upon the rock, you have 4G on Airtel, Vodafone, and Jio. I sat on the rock, Instagramming furiously. A farmer came up to me, smiled, and handed me a few oranges. Oranges grow everywhere in the lower altitudes in Sikkim. It has to be one of the happiest experiences of my entire life. 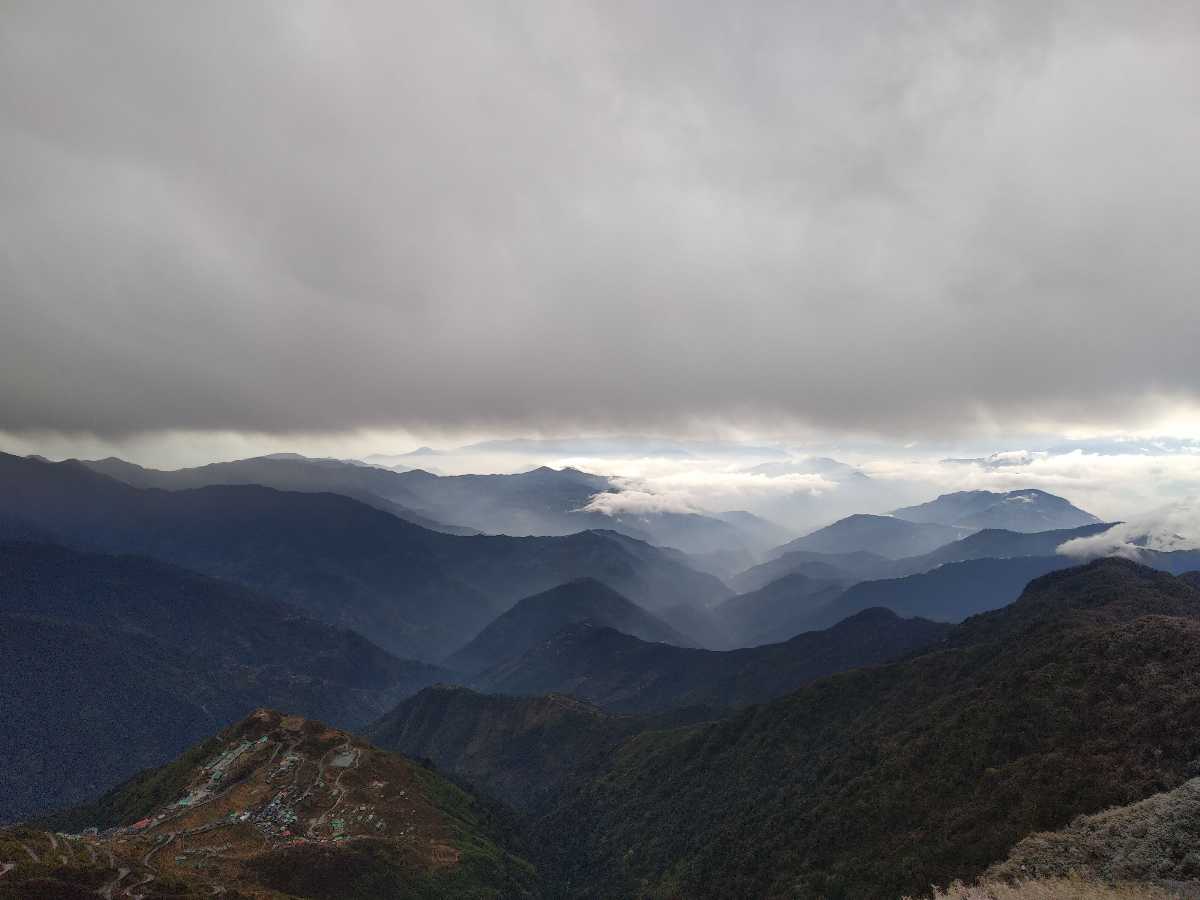 Tag Along organises a high-altitude cycling trip through East Sikkim, and this year, I was part of the support team. Once we reached 11,000 feet, it started snowing, and the pickup truck that I was in broke down. It was just 3 of us, and we pushed that difficult thing along the Zuluk hairpin loops for it to start. I remember pushing the truck and watching the storm clear out.
Jumping on the tops of vans, having a yak chase me, and having little brushes with death every now and then are small bits of this life I wouldn’t trade anything for.

I was living on a small stipend, mostly just enough to buy myself snacks and tidbits, which to me, was enough. While living in the mountains, you learn to reduce your wants to the bare minimum. I was convinced not to touch my savings, so I started freelancing side by side.

Freelancing is No Party

I didn't grow up having to worry about petty cash, and figuring it out was a long, irritating process. My experience as a web content strategist and manager, copywriter, an email marketer, and skills as a self-taught amateur designer hadn’t been helping with well-paying freelance gigs. Content jobs pay deliriously low money, and having had a comfortable career in cushy jobs hadn't prepared me for the blow. I used my network to tap into land gigs I was interested in, such as web design and copy.

All of What I loved 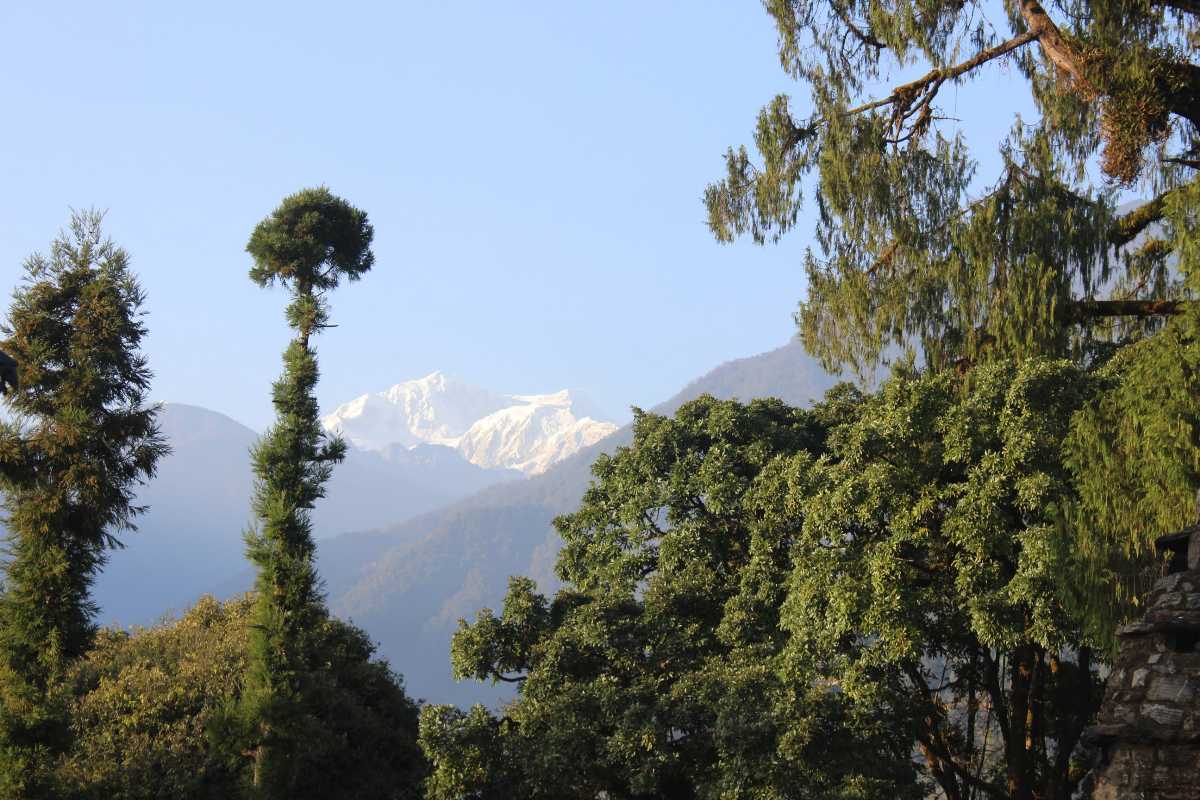 The burnout was possibly why I didn’t enjoy doing the same work so much anymore. I channelised my frustration onto things that I loved doing, such as painting. I started painting bookmarks and sent them out to my friends. Most of them loved the effort, and some even suggested that I should consider selling them. There was my cue. I painted bookmarks and started selling out of the cafe. It isn't a living, sure. But 100 bucks from a bookmark always gave me way more satisfaction than INR 10,000 for a web freelancing gig. Sometimes, I help out with baking at the cafe, a hobby I've nurtured since I was a child. Bhavana and I sometimes bake for a birthday, or just because we want cheesecake!

It is humbling to live in a wholesome environment and do something that makes you happy every day. There's an inspiration to live doing what you love best, and this makes the energy infectious. 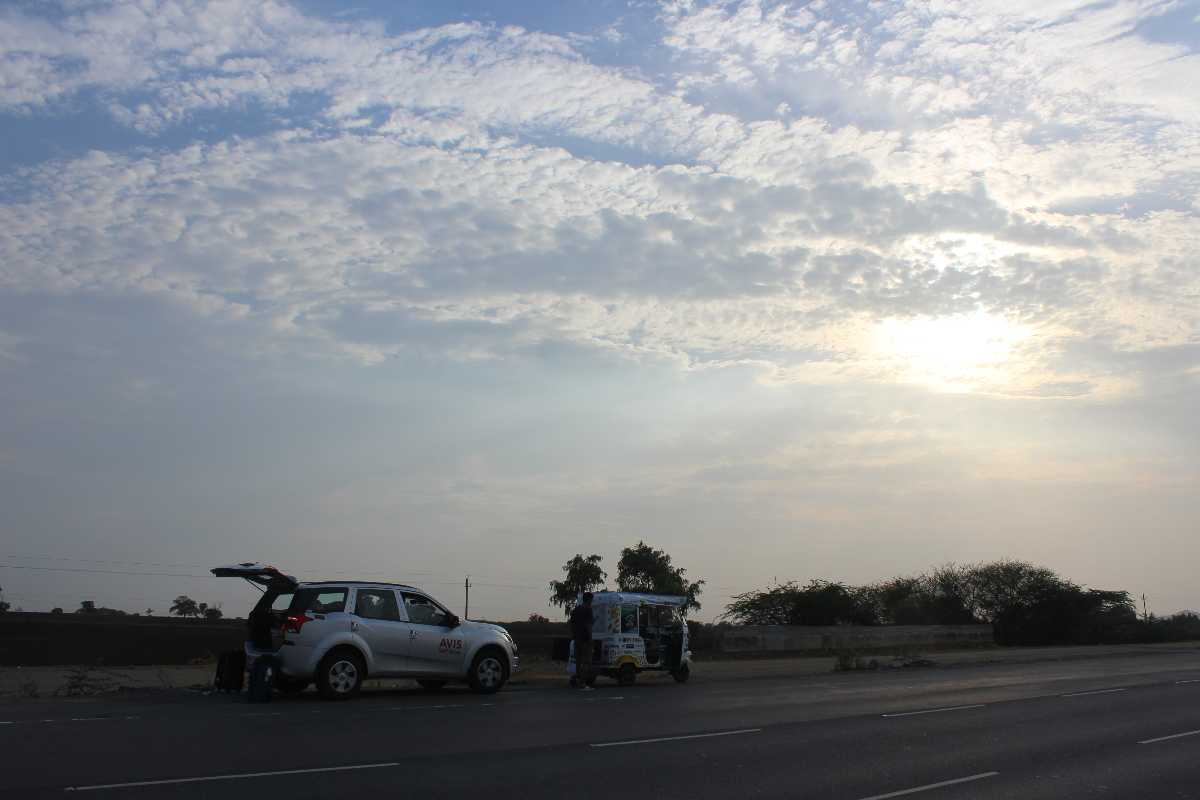 In the summer of 2019, I wanted to feel the heat! Despite the decision to live in the mountains, I didn't realize what a cold winter I was signing up for. Gangtok doesn't really believe in indoor heating, and spoilt me wasn't ready for swollen toes, and a perpetually runny nose. It was right in time when a friend, Sushil Reddy, started his SunPedal Ride, an initiative to promote clean energy, on a solar-powered e-rickshaw across the Golden Quadrilateral route and asked that I join the journey. It came right in time when I wanted to thaw, and I ended up being on the road every day for a whopping 60 days. The perspective gained from travelling across the entire country in a snapshot is indescribable.

I continue to learn new skills and freelance to sustain a living and travel for some time, as I'd always wanted to. I am a better person, thanks to the value system of the mountains. I've had informal chats with friends so often asking me when I'm going to come back to city life. It could happen eventually, but I've found greater enrichment in who I am outside of the daily grind of city life. It really isn’t going to happen anytime soon!

Places to visit in Sikkim

View all places to visit in Sikkim

Paragliding in Sikkim: An Adventure of a Lifetime

The Story of a Buddhist Anarchist - Alexandra David Neel

Mother - Son Duo Set out on a Journey Across India