7 Festivals of Karnataka That You Must Plan Your Trip Around!

Karnataka has many places that make their way to the heritage of India according to UNESCO why not see some of its unique festivals as well? Here are 6 of our favourite festivals of Karnataka, that you can plan your visit around!

In public places, clay idols of Lord Ganesha are placed in all the holy shrines and prayed upon while in the houses a small area of the house is cleaned and the idol is placed and prayed upon. The main sweet dish of this festival is the Modak which is a dumpling that is made from rice/wheat flour and stuffed with coconut, jaggery, dried fruits etc. Another sweet dish is Karanji which is also similar to the modak. This festival is very sacred to the Hindus. On this festival four main rituals are performed which are as follows:

Prana Pratishtha: It is when Lord Ganesha is asked to come inside the Murthi or idol

Shodashopachara: It is the 16 ways to pay tribute to Lord Ganesha

Uttar Puja: It is the puja after which Lord Ganesha has entered the Murthi and can now be shifted 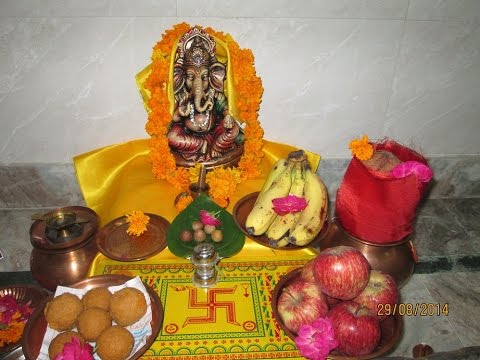 The murthi of Ganesha is shifted in the houses and offered fruits and other sweets. (Source)

Ganpati Visarjan : This is when the murthi or idol of Lord Ganesha is immersed into the river body be it a lake, pond or the sea. 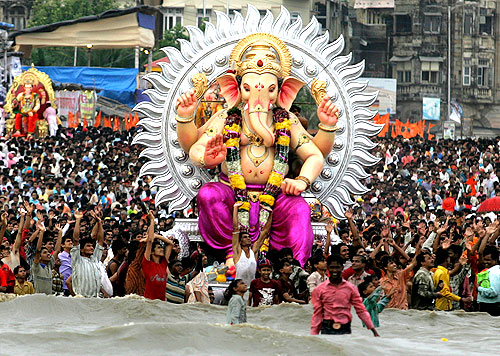 The statue being taken to the water body for Visarjan. (Source)

Hampi festival which is also known as Vijaya Utsav is a famous festival to celebrate the birthday of the ancient poet Purandaradasa who lived in Hampi and is normally celebrated in the month of either October or November over a period of 3 days. This festival attracts people from all over the world.

In this festival the Kannadigas show their talent in dance, art and music. There are also other activities like fireworks and puppet which is an eye catcher for tourists everywhere. Not only that Hampi is a rich cultural place that is named as one of the heritage of India according to UNESCO which gives it all the more tourism.

The Karnataka government celebrates this festival on a large scale due to its fame. Young local boys dress up as military from the golden era and line up in the lanes of Hampi.

There is an elephant marth across the ruins of Hampi which is almost 15 km known as ‘Jumbo Savari’.

The monuments in the whole 15 km of the ruins of Hampi is lit up with lights giving it a mesmerising look that is truly a beauty in itself.

There are performances by both national and international stars. 2015 seen performances from Himesh Reshammiya, Mika Singh etc. Other than all these cultural activities there are water sports and games for kids and family, exhibitions, painting competitions etc. This is a festival celebrated one day before Ganesh Chaturthi as a day to pay tribute to goddess Gowri, mother of Lord Ganesha. It is a day celebrated not only in Karnataka but throughout India to praise the Goddess for her power to bestow strength and courage on the people. It is said that on this day the Goddess Gowri like any other wife comes to her parents home and the next day Lord Ganesha comes to take her back home.

On this day the ladies and females of the house have a clean bath and dress up in new clothes and do Sthapana of the Jalgauri which is the statue of Goddess Gowri in turmeric.The goddess is mounted on a plate and a puja is done which is supposed to be done with suchi (cleanliness) and devotion.

The married woman’s family sends her a Gauri Habadda or a gift on this day it can even be money. 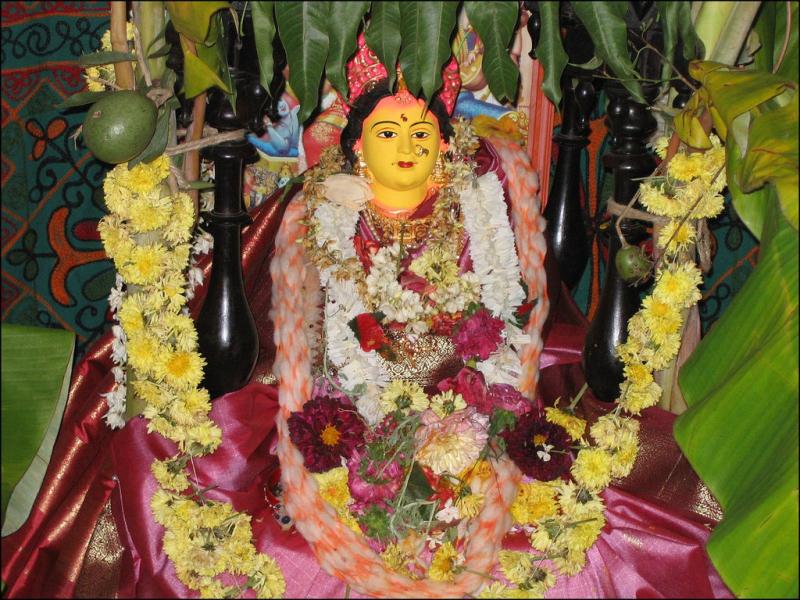 The installation of the idol of Goddess Parvati or Gowri.

Performed on a full moon day the Karaga is a folk dance performed as a ritual dedicated to Draupadi. It is one of the oldest festivals performed in the Bengaluru. It is led by the men because in the last part of Mahabharatha the demon Tripurasura was still alive and Draupadi took the form of a shakti goddess and created soldiers called Veerakumaras. After the war, the soldiers asked her to stay but she couldn’t, so she promised to come visit them on the first full moon of the Hindu Calendar.

There is a Karaga carrier, dressed up as a woman carries the Karaga which is a pyramid covered in flowers and visits all the Veerakumaras in his temporary Devi State. Nobody knows what is inside the Karaga, the carrier balances it very well on his and is not to drop it or else will die as is believed. The Karaga returns to the temple the next day by dawn.

The Karaga festival is a beautiful festival which sees the respect and love the people have for Draupadi, the Shakti Devi. 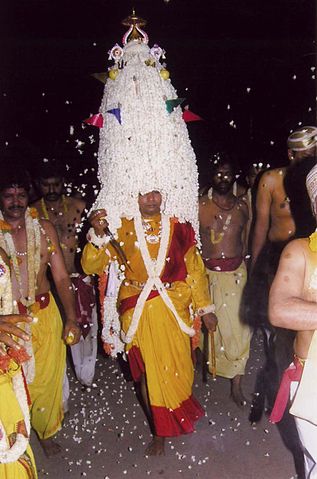 The Karaga Carrier in the form of a woman (Draupadi). (Source)

The Pattadakal dance festival is organised every year on a very large scale by the Karnataka Government in the month of January to honour and celebrate of all its famous temples.

The Pattadakal village is situated 20 km from Badami in Karnataka. It is a world heritage centre and famously known for its many well-constructed temples as it was the second capital of the chalukya kings.

Most of these temples at the Pattadakal village are devoted to Lord Shiva with beautiful structure and carvings on them. The largest of the all the temples are Virupaksha and Mallikarjuna.

This festival sees many different and beautiful dancers from not only Karnataka but the whole country. Another major attraction of the Pattadakal festival is the craft mela that is organised here like nowhere else.

Another famous dance festival of Karnataka is the ‘Hoysala Mahotsava’ in Belur-Halebid. 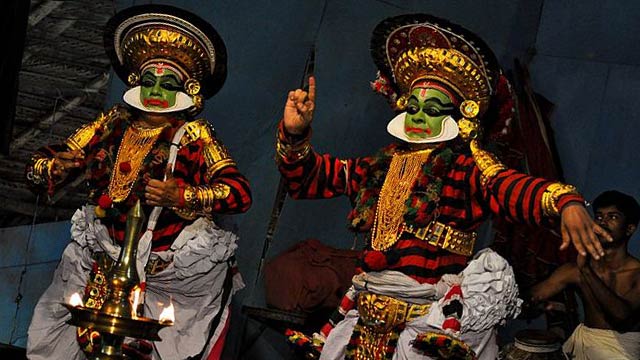 The Pattadakal dance festival sees dancers from all over the country. The above-shown dance is the Koodiyattam.

A very important Jain festival that is held every once in 12 years in the town of Shravanabelagola in Karnataka, India. The festival sees the anointing the 17.3736 metres tall statue of Siddha Bahubali.

As this festival begins, the devotees sprinkle blessed holy water on the people come to participate in the festival. Then, the statue is anointed or bathed with liquids such as milk, sugarcane juice, saffron paste, and powder of sandalwood, turmeric and vermilion. The Jain nuns climb up the Vindhyagiri hills to reach the enormous statue.

Offerings made to the statue are petals, gold and silver coins, precious stones. In 2006, the ceremony ended with the shower of flowers from a helicopter onto the statue and people jumped up to catch those flowers as a blessing. 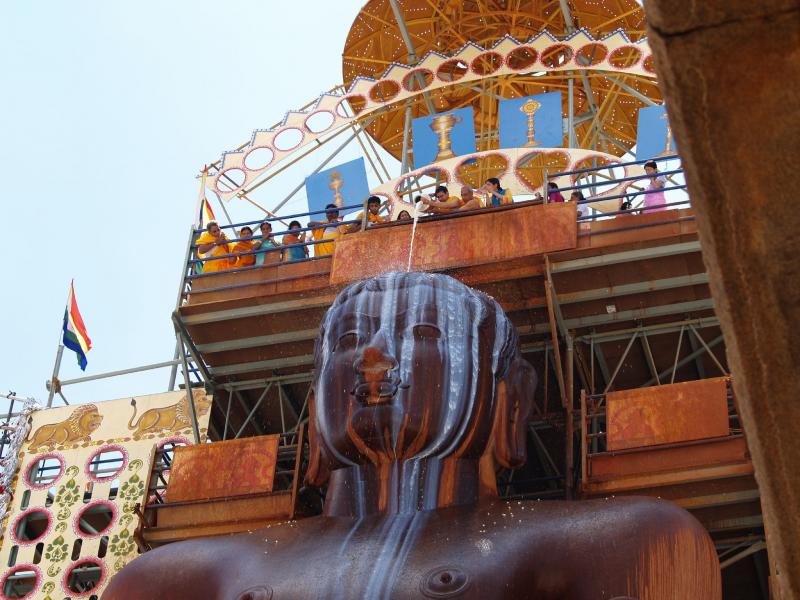 Kambala festival is a traditional buffalo race organised annually in Dakshin Kannada and Udipi districts of Karnataka by the farming communities. It is held between November and March. A pair of buffaloes is tied to a plough and is made to run through a field of slush, anchored by a farmer. The origin of this festival can be traced back to over a 1000 years when the festival was celebrated to appease gods for good harvest. 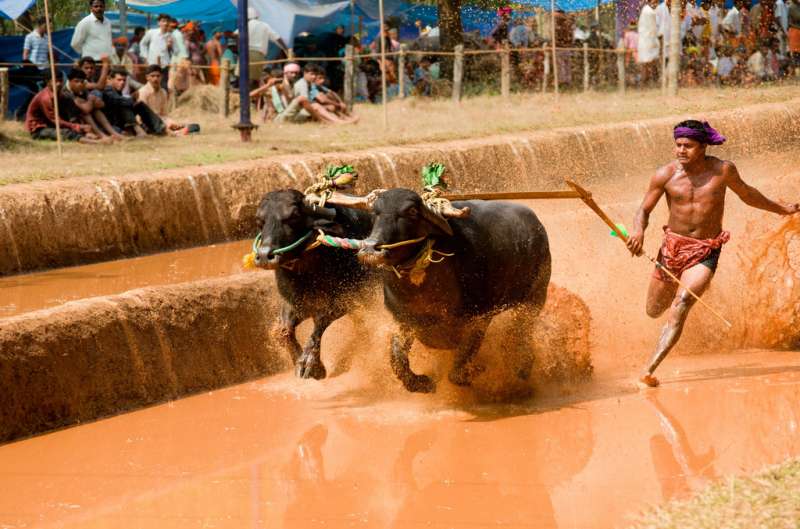 Places to visit in Karnataka

View all places to visit in Karnataka

Karnataka Culture - All About Tradition, Dress and Festivals of Karnataka

16 Interesting Facts about Karnataka That Will Blow Your Mind!

National Parks in Karnataka For A Wild Adventurous Holiday

All You Need to Know About Scuba Diving in Karnataka

Hill Stations in Karnataka For A Summer Weekend Getaway

Top Beaches in Karnataka For A Perfect Beachside Vacation

This Indian Luxury Train is Restarting its Operations From March 2020!

The Kodachadri Trek in Karnataka Is The Perfect Blend of Adventure & Nature!

Its Time for Equality: Matrilineal Societies in India Might Be The Answer

7 Best Night Treks in India - For The Nocturnal Adventurists

Karnataka Culture - All About Tradition, Dress and Festivals of Karnataka

16 Interesting Facts about Karnataka That Will Blow Your Mind!

National Parks in Karnataka For A Wild Adventurous Holiday

All You Need to Know About Scuba Diving in Karnataka