Culture of Maharashtra - A Guide to the Vibrant Marathi Culture!

Diversity comes naturally in this third-largest state by area and second most populated state in India. Maharashtra can also be called the land of scholars, saints and actors as many of the people from Maharashtra have succeeded in the fields mentioned above. Maharashtra is known for its purogami culture (forward culture). 'Maha' means big and 'Rashtra' means nation. Maharashtra is indeed 'Maha' in its size, population and culture. Maharashtra is famous for its unique customs and practices.

The traditional attire of Maharashtra required the men to wear a dhoti (a long garment wrapped around the waist and legs), kurta or a cotton shirt, pheta (headwear or topi) and waistcoat or bandi which was optional.

Women wear choli or blouse on the top and a 9-yard long saree called 'lugade' or 'nauwari saadi'. They usually wore open sandals or chappals as their footwear. In the 21st century, most of the people have started wearing western clothes or a fusion of Indian and western wear. The traditional attire is worn by very few but is worn by many during any religious event or Marathi festival.

The staple diet of Maharashtra includes wheat, rice, jowar, bajri, vegetables, lentils and fruit. Meat was not eaten much in Maharashtra until recent times. Their diet is rich in carbohydrates as initially they were occupied in labour-intensive jobs like farming. The Food of Maharashtra is from sweet to mildly spicy to spicy. Some of the dishes like vada pav, pav bhaji, missal pav and pooran pori have become famous throughout the world. Shrikhand, yet another popular dish has have said to be originated in Maharashtra. 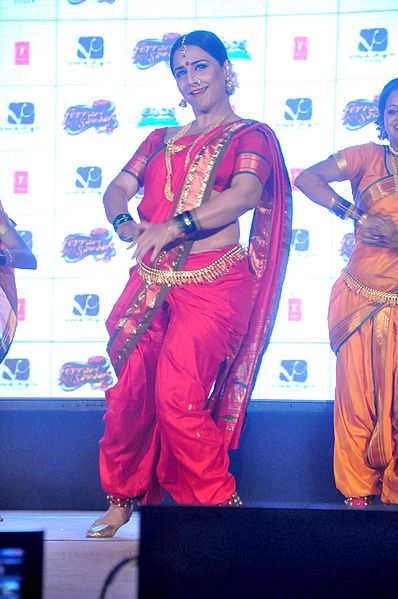 There are around 80 per cent of Hindus and a significant amount of Muslims in Maharastra. Christianity, Buddhism, Jainism, Sikhism and other religions are a minority. Churches, temples, mosques and other religious centres are found throughout Maharashtra. The people of Maharashtra take pride in their cultural diversity and respect every religion.

Traditionally, the occupation of the majority of Maharashtra was agriculture. Folks near the coastal region were involved in fishing activities. But over the years, many places have been developed and industrialised, giving rise to various business and job opportunities to the people.

Some festivals like Nag Panchami, Ganesh Chathurthi, Gokul Ashtami, Makar Sankranti, Gudi Padwa, Bhau Beej, Ellora Festival Narali Pournima and Shivaji Jayanti have originated in Maharashtra. Nag Panchami is devoted to the Snake God. The Snake God is prayed to get rid of the 'Nag Dosh'; Ganesh Chathurthi is an eleven-day long festival of Lord Ganesh. The people of Maharashtra celebrate other festivals also like Diwali, Christmas, Eid, and New years. In most places, people celebrate all major festivals irrespective of their religion and honestly, that just shows the unity and brotherhood among them.

The artisans of Maharashtra are very precise and delicate in their work. The weaving of quality fabrics, Mashroo and Himroo, made from cotton and silk (famous in Aurangabad) are finest of its kind.

The Kolhapuri Chappal from Kolhapur is known for their simple style, durability, quality of the leather and its design. Painthani Sarees that have been in production since past 2000 years are fine, exquisite silk sarees with delicate zari handwork in their border. Warli Paintings done by the warli tribes, who live in the Thane district of the state, tell a tale to the viewers. The paintings are of stick-figure forms and are easy to understand. Kolhapur Saaj is a special type of necklace, famous among women of Maharashtra.

Maharashtra has very well adapted to the Bollywood industry. Many famous actors and actresses like Amitabh Bachchan, Shah Rukh Khan, Salman Khan, Priyanka Chopra, Kareena Kapoor and Deepika Padukone, reside in this state. Hindi (Bollywood), English and Marathi films are a great hit among the viewers.The people of Maharashtra are said to be very sincere and hardworking. In recent times, many people from other states have flocked to Maharashtra especially to Mumbai due to the wide array of career opportunities. Some parts of Maharashtra are developed while others are still developing, but the thoughts of all the people are united. It is no secret that people of Maharashtra take pride in their diverse culture, after all, Marathi culture is definitely special.

Places to visit in Maharashtra

View all places to visit in Maharashtra

Treks in Maharashtra To Explore The Forests Of Western Ghats

Must Visit Picnic Spot in Maharashtra

Escapes from Monotony: A travelogue of Treks at Takmak

The Winding Roads and Destinations #TWC

Beaches in Konkan For An Exciting Western India Getaway

This Island In Maharashtra Is The Best Weekend Exploration - Have You Been?