View Hotels For Your Date

Padang, an offbeat tourist destination is the provincial capital of West Sumatra and a prominent gateway to the home of the native tribe, Minangkabau tribe. A busy harbour, popular for its products such as rubber, cinnamon, coffee, tea and nutmeg, Padang is a perfect countryside where you can relax and enjoy the scenic beauty that the place has to offer. Previously a Dutch Colony, this urban Indonesian area offers an excellent dining scene to its guests.

The beaches in Padang are not crowded, making it a place where you can rejuvenate your senses, away from all the chaos and rush. Padang mostly has a tropical rainforest climate that receives frequent rainfall throughout the year, making it difficult for travellers to travel around the city. In 2017, Padang received the 'Adipura' award for being the cleanest and greenest cities and won the 'Adipura Kencana' thrice.

The native food is usually spicy and delicious; Rendang, Soto Padang and sate are a few Padang dishes that are relished by many. Just relax on the beach, or go swimming, hiking, snorkelling or fishing- Padang is sure to offer you with a lifetime experience that you're not going to forget for a long, long time!

A large crater lake, Lake Maninjau offers a great place to relax and experience the rural lifestyle and culture of Padang. A romantic getaway for couples, you should surely visit this place for the view of the sunset.

A three-storeyed building with a unique style of architecture, the Pagaruyung Palace is completely made of wood and houses some ancient antiques and costumes and is revered by the Minangkabau culture. The Palace has been renovated multiple times to maintain its charm after it was damaged in a fire.

Started during the period of the Dutch, the Ana Valley is one of the top tourist destinations, located between Padang and Bukkitingi. The valley is located on the main route and hence not easy to miss! you can sit on the rocks near the waterfall and enjoy the beauty of it. Weekends are usually crowded, so make sure to plan accordingly and go.

One of the most isolated places in Indonesia, the Mentawai islands are inhabited by the Mentawai tribe, who have very little contact with the outside world. Subjected to outside influences only from the 20th century, the people here still abide by their traditions and have a strong spiritual relationship with the forests. Immerse yourself in the tropical rainforests, away from the chaotic city life and experience in the traditions of the native tribes.

A favourite tourist site, Air Manis beach offers an ecstatic view of Mount Padang. The beach has a historical significance attached to it; there is a replica of a boat and a man, who is considered to be Malin Kundang. Legend has it that the man was turned to stone by his mother after he failed to acknowledge his mother once he became rich. The beach is serene and a good place to relax.

This iconic museum in Padang has to be explored by everybody who visits Padang as it stores the rich history and heritage of the Mianang culture. A major attraction here are the "Rumah Gandang", which are basically the traditional community houses of the Minangkabau tribe. These houses have now been converted into museums for people to get a glimpse of the native life. There are fascinating artefacts and antiques along with the traditional costumes and accessories of the people. It is popular among the tourists for its architecture and the displays that are available in the museum.

A tropical paradise for anybody who loves to spend time in lush greenery, the Bung Hatta Nature Reserve houses some rare and exotic plants. The most unique plant you'll find here is the giant flower called Rafflesia Arnolldi, which is considered to be the biggest flower in the whole world. It's a rare wonder as the flower takes 10 months to mature but blooms only for 15 days in a year, generally between July and September. Apart from this, you're sure to find plants and flowers here that you won't find in any other part of the world.

A predominant Sunni mosque, the Ganting Grand Mosque was constructed in 1805, making this one of the oldest mosques in Indonesia. What's so unique about the building is that involved many people from different cultural and religious backgrounds in its construction. The mosque was severely damaged in the earthquakes that took place in 2005 and 2009 but portrays a European neoclassic style of architecture and is a famous tourist spot in Padang. Other places you should visit are Pamutusan Island, Pulau Pagang and Pasumpahan Island.

The traditions in Indonesia differ from region to region and hence the culture of Padang is unique and distinct from the other traditions followed in Indonesia. The houses in Padang are generally rectangular in shape with a triangular, pointy roof. While this style of design can be seen in other parts of West Sumatra, it was in Padang that this style of architecture originated. The roofs, that are usually pointy are called Gojoang and are a way to show the people's gratitude to the Gods.

There are many tribes that live in Padang including the Minangkabau Tribe, Mentawai Tribe and Tanjung Tribe among others. When it comes to food, Padang takes full credit for the most famous dish called the Nasi Padang. It consists of meat, vegetables, rice and a few native spices that makes it extremely delicious.

View All Posts About Padang

What is the best time to visit Padang?

Although the weather is tolerable all year round and mostly hot, the best time to visit Padang is from June to August as the other months, and specifically March, April, September and November experience high rainfall.
Read More

What is the local food in Padang?

The food of Padang consists of a multitude of aromatic spices and fresh, native herbs that makes it extremely delicious to the point where it is considered to be the best cuisine in the world. The typical Padang dishes are cooked in a very extensive manner and usually found in 'warungs', small, family-owned restaurants. Rendang, ranked as the best dish in the world by CNN Travel in 2011 has its roots in Padang.

This dark beef curry is cooked for many hours combined with coconut milk and many varied herbs. Visit the Resto Selamat to relish the best Rendang. Sate Padang, another cherished Indonesian dish is made of fresh diced beef or lamb that is grilled over hot coconut shell charcoal. Head to Sate Danguaang to taste this unique sate.

Gulai Paku or fiddlehead fern curry is an ideal dish for the vegetarians; the plant is cooked with coconut milk and some aromatic herbs such as cumin, chillies and ginger. This dish tastes great when eaten with steamed rice and fried tofu. 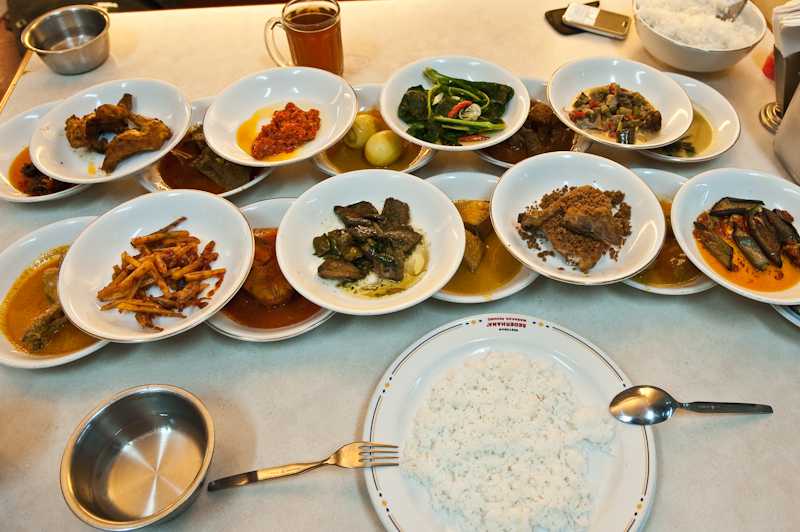 One of the most popular things to do in Padang is to go to places where they serve a huge range of dishes on a table and you are only to pay for what you eat. The experience is unparalleled!

What are the places near Padang?

Have a Question on Padang?