Airports in Himachal Pradesh - Because Mountains Are Calling You!

Himachal Pradesh is visited by tourists every year due to its scenic and mesmerising beauty. Located in the lap of the Himalayas, Himachal Pradesh is a hub of visitors flocking by to enjoy the exotic spots of the state. Himachal Pradesh is also known as the 'Residence Of Clouds' (Himachal meaning clouds and Pradesh meaning place of residence). Himachal Pradesh is well connected to the major cities of the country by roads as well as airways; it becomes feasible for the travellers to travel to and fro. There are 3 main airports in Himachal Pradesh - Gaggal, Bhuntar, and Jubbarhatti. Apart from these, no international airport has come up in the state as of now. These airports, however, are not in the best of the state which is why people prefer to fly to Delhi airport or Chandigarh and plan their trips accordingly.

Connectivity:
One can get a flight from Delhi through Shimla to Bhuntar. Jagson airlines assist a regular service of flights in Bhuntar. The airport has connecting flights to Delhi as well as Pathankot by Air India, to Chandigarh by Deccan Charter and Jagson airlines. Jagson airline also connects the Bhuntar airport with Delhi, Dharamsala, and Kolkata.  Air India Regional airline was stopped in the July 2012 after which Kingfisher Airlines also stopped their operations in September 2012. However, Air India Regional began operating in Kullu in May 2013. Also, the flights connecting Kullu, Chandigarh, and Kullu were also started by Himalayan Bulls along with Deccan Charters three times a day from April 2, 2014. The airport also began to schedule domestic flights from Delhi by Air India Regional and Deccan Charters along with Himalayan Bulls from Chandigarh in August 2016.

Runway:
The length of the runway is 3690 ft while the surface is Asphalt. The airport runway is, however, challenging because there is a single runway which is located in the middle of rising peaks which are at much higher elevation as compared to the runway. In the past as well the airport has witnessed floods because of its location on the bank of the river Beas.

Location:
Gaggal Airport, also known as Kangra Airport and is located in Gaggal near the Kangra district of Himachal Pradesh. The airport is very well connected and lies at a distance of 14 kilometres to the South-West of Dharamshala, in the Kangra district of Himachal Pradesh. This airport is located at a distance of 13 km from Dharamsala and a distance of 8 km from Kangra. Very frequent flights are observed from the Gaggal airport which can be taken from Delhi to Pathankot city.

Connectivity:
The airport runs flights which connect to Delhi, Kullu, and Chandigarh through the services provided by Air India, SpiceJet and Jagson airlines.

Runway:
The airport has a runway length of 4620 ft, and the runway surface is Asphalt. The airport has one runway which has an orientation of 15/33 and has a width of 30 m with a length of 1408 m. The runway covers an area of 126 acres. Aircraft such as ATR-72 can easily be parked in the airport with occupying a space of 300 x 200 ft accommodating around 100 passengers. Facilities provided include safe night landing and aerodrome beacon with PAPI lights which help a lot during navigation.

How to Reach:
One can easily spot taxis and autos from outside the airport until the way back to Dharamsala Also, hotel pickups, as well as rental cars, can be arranged before the arrival of flights. All the contact numbers can be looked up on the website. 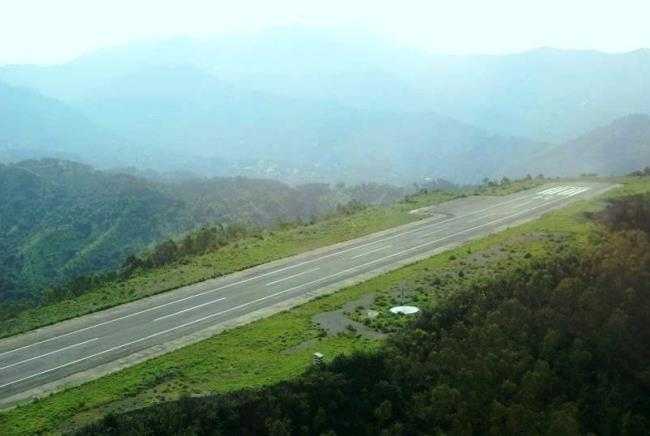 Location: The Jubbarhatti Airport near Shimla was made out by cutting the top of the mountain and levelling a single runway. If anyone plans a trip to Shimla, this airport plays a significant role because Shimla lies at a distance of 23 km from Jubbarhatti airport. From this airport, the nearest International airports can be spotted either in Chandigarh (Chandigarh Airport) or Delhi (Delhi Airport) which lies at a distance of about 100 km and 265 km by road. This airport is also used for the purpose of providing training to emerging and budding pilots. Only two medium aircrafts can be accommodated on the airport at a time.  This airport in Himachal was reopened in 2017.

Connectivity:
A total number of 28 passengers are allowed to travel by Kingfisher airlines in return due to the high altitude in Simla which cannot sustain a lot of load on the journey. This is the reason why all the operations of the airport were brought to a halt in Shimla in September 2012. On April 27, 2017, the operations of the airport were resumed with a daily flight of Alliance Air, a subsidiary of Air India from Delhi and the fare starting from INR 1920.


Runway:
It has a runway length of about 4035 ft, and the surface of the runway is asphalt. There is a huge space where all the small aircraft can be easily parked. As many as 50 passengers can be accommodated in the terminal who get off from the arriving planes and 40 passengers who need to board the plane for departure.

How to Reach:
There is a bus stand too at a distance of 17.2 km from the airport. A railway station named Jatogh railway station too can be found at a distance of 13.4 km from the airport. Taxi services are readily available to and fro services between cities and places of interest. All the imports into the country and all the exports of quality goods and materials are controlled by the airport authority of India. The airport maintains good connectivity, and it takes nearly 40 minutes for one to reach Shimla from here. All kinds of transport services can be arranged from outside the airport or in advance as well if required. The option of advance booking is offered as well to the visitors.`

Some Other Upcoming Airports in the State

Mandi Airport is an upcoming airport in Nag Chala. The airport is planned to be built on a total of 698 acres of land.
The Government is also undertaking the project Udan for the development of four airports in Punjab and two airports in Himachal Pradesh. Under this scheme, the government aims at connecting the non-working 33 airports in cities of Shimla, Pondicherry, Kandla, Bhatinda, and others. Some highlights of the development include:
Eight national highways connect the state of Himachal Pradesh to the rest of the country thereby guaranteeing excellent means of connectivity. Though Airways too are a big hit there, due to bad weather conditions, the flights get delayed and sometimes cancelled. Since the airports are not in a very good condition and with airlines withdrawing, it has become increasingly difficult for people to travel to or from Himachal Pradesh. The government is taking measures to curb this problem and attract people from all over the world to come and visit the place by improving the infrastructure and other public facilities which are offered at the airport.

Places to visit in Himachal Pradesh

View all places to visit in Himachal Pradesh

What does Yellow Weather Mean for Himachal Pradesh and Your Travel Plans?

Skiing In Himachal Pradesh For An Icy Adventure

Charming Lakes in Himachal Pradesh for Every Traveller to Visit

Himachal is Full of Mysterious and One Such Secret is Chindi!

Ravishing Offbeat Places in Himachal That Are Waiting to Be Explored

This Stunning Zostel in Bir Billing Is Just 10 Hours Away From Delhi!

Winter Roadtrip In Spiti Valley With The Doi Host!