Facts About Taj Mahal: The Epitome of Eternal Love

Taj Mahal, the symbolic representation of eternal love is located in Agra, India. This magnificent monument stands as a symbolic representation of love and care which the Mughal emperor Shah Jahan had for his wife Mumtaz Mahal. The story behind this eternal love story dates back to 1607. Shah Jahan, who was initially named as Prince Khurram was the son of Jahangir, who was the fourth Mughal emperor of India. Jahangir was the grandson of Emperor Akbar the Great who is considered as one of the finest Mughal emperors from the Mughal dynasty.  In the year 1607, Shah Jahan was strolling down Meena Bazaar when his eyes caught sight of a girl selling silk and glass beads. It was love at first sight for Shah Jahan, and the girl hawking the beads was no other than Mumtaz Mahal, who was then known as Arjumand Banu Begum. She was a Persian princess who was 15 at that time while Shah Jahan was only 14 years old. Emperor Jahangir gave his nod for the match in the year 1612.

Taj Mahal stands as a depiction of love which Shah Jahan had for his wife and was built in her memory after her untimely death.

Here are 17 Facts About Taj Mahal that you must know:

Arjumand Banu Begum was rechristened as Mumtaz Mahal by Shah Jahan after their marriage. Mumtaz Mahal in Persian means the "Jewel of the Palace". Though Shah Jahan had seven wives, Mumtaz Mahal was his favorite, and she accompanied him everywhere. She died while giving birth to their 14th child due to some complications in the year 1631.

2. The Construction Involved the Help of an Army of Pachyderms

The construction materials for building the Taj Mahal, like marbles, precious gemstones and others were transported by the help of more than 1,000 elephants.

Inlay work precious and semi-precious stones were used which ranged to a variety of around 28 different types. These stones were sourced from Sri Lanka, Tibet, China and even several places in India.

4. Appears in Varying Shades Throughout the Day

Taj Mahal appears to be of a different colour at the different time of the day. It is pinkish in the morning, milky white in the evening and golden when the moon shines.

5. 'Allah' is Inscribed Many times onto the Tomb of Mumtaz

Ninety - nine names of Allah can be seen as calligraphic inscriptions on the tomb of Mumtaz Mahal.

6. Annual Number of Visitors Is Equivalent to a City's Population

The Taj attracts around 2 to 4 million visitors annually from around the globe which includes 200,000 from overseas.

7. Hidden by a Bamboo Cover During Wars

Taj Mahal was covered with a stockpile of bamboo to save it from the bombers in the 20th century. During the Indo - Pak war of 1971, it was camouflaged with green cloth to protect it.

8. An Amputee Was the Architect of the Taj Mahal

The foundation of the Red Fort was laid by Ustad Ahmed Lahauri who was the head architect for the Taj project too. It becomes quite absurd that an amputated architect would be entrusted upon by Shah Jahan who believed in perfect craftsmanship.

9. Safety Measures Were Considered During Its Construction

10. The Taj's Foundation Is Quite Surprising 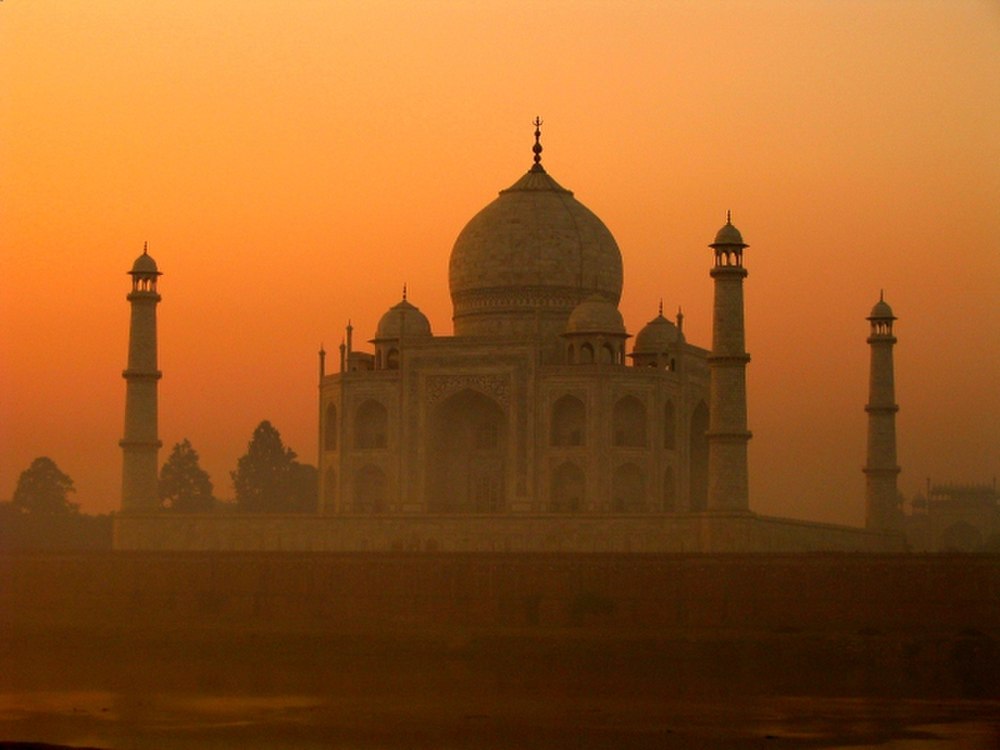 Taj's foundation, which many will be bewildered to know, is made of timber whose longevity and durability is quite less. The foundation should have crumpled till now due to rotting if not for the Yamuna River. The river keeps the wood moist and strong hence helping to maintain a strong foundation.

11. Making the Taj Today Would Cost over a Billion USD

12. There Was Almost the "Black Mahal' as Well

Taj Mahal is among the Seven Wonders of the World and is known worldwide. However, the fact that Shah Jahan wanted to build a black Taj Mahal for himself would surely astonish you. He began to build his own tomb on the other side of the river but was unable to complete it as he was taken captive by his son Aurangzeb.

13. The Interiors Are Adorned with Holy Calligraphy

Emphasis has been laid to stylize the interiors (especially walls) of the Taj Mahal; calligraphic inscriptions from the holy book, 'Quran' can be seen. Verses from it can also be located on the tombs of Mumtaz and Shah Jahan.

14. The British Left an Influence on the Taj Mahal

According to records, the initial landscaping of Taj Mahal included an abundance of daffodils, roses and fruits. However by the onset of the 20th century when the British took control over large parts of India, a change in the landscaping of the forecourts of Taj Mahal was observed. It was done to assert their authority over the people of India via imposing their architectural style.

15. The Taj Mahal Was to Be Built Elsewhere Initially

Agra was NOT the actual site for the Taj Mahal. To commemorate his beloved wife, Shah Jahan had conceptualized the structure to be built in Burhanpur, Madhya Pradesh- the town in which Mumtaz died. Since enough white marble could not be procured from the site, the structure had to be shifted to the city of Agra, which has now become a heritage city.

16. The Rooms with the Tombs Are Not Adorned or Decorated

Islamic scriptures forbid any inscriptions and decorations on the tomb. That is why despite the exuberant exteriors of the Taj Mahal, the actual room in which the tombs of Mumtaz and Shah Jahan now rest is devoid of any stucco work in the walls.

17. The Taj Mahal Houses Other Burials as Well

Shah Jahan's other wives and favourite servants are buried in the mausoleums (outside the Taj Mahal but in the same complex).

Places to visit in Agra

View 17 places to visit in Agra

View All Hotels In Agra

Places to visit near Agra

Malls in Agra For Shopping, Food, Entertainment and More!

Taj Mahal Was the Most Googled Landmark of 2019!

Visiting the Taj Mahal at Night

The Golden Triangle Tour Of India

Taj Express - A Journey From Delhi To Jhansi

Romantic Getaways From Delhi: Places Near Delhi To Visit With Your Loved One!

Places to visit near Agra

Malls in Agra For Shopping, Food, Entertainment and More!