What is the best time to visit Rajasthan?

The best time to visit Rajasthan is between October and February, which is the winter season. The temperature remains pleasant throughout the day during winters making it perfect for exploring all the palaces, temples, and forts. July to September can also be an excellent time to visit as the mostly dry and arid state receives some amount of rainfall. Still, the humidity and temperatures are mostly high. The state also experiences extremely high temperatures during the summer season which begin in March and last till June.

More about Best Time to Travel to Rajasthan

The summer season in Rajasthan starts in March and lasts until June. This season is quite extreme as the temperature could go as high as 48°C during peak day-time hours. The scorching heat makes it uncomfortable to explore the attractions in the state. It is better to avoid visiting the cities during the summers. However, there are specific destinations which offer a suitable climate for exploring like Mount Abu, Kumbhalgarh or Ranakpur where the temperature ranges between 24°C and 33°C. It is, however, always advisable to check the weather and temperature forecast of the place before heading out.

July marks the beginning of the monsoon season in Rajasthan which goes on until early September. The temperatures drop across the state when it rains; however, the humidity levels increase incredibly as the monsoons progress and can go up to 77% in some regions. Most regions receive low or moderate rainfall; however, some parts experience heavy showers during this period. Hailstorms are also frequent in specific areas. The rains transform the otherwise dry and arid landscape of Rajasthan, and a beautiful green carpet appears to add to the charm of the beautiful state. One can also witness the festival of Kajli Teej/ Teej Festival which is celebrated in August.

From October, the autumn season begins, and it starts to transform into winters during November. The temperature mostly hovers between a minimum of 2°C and a maximum of 33°C. During the peak season, the night time temperature sometimes drops below 0°C. It is considered to be the best time to visit Rajasthan since days are pleasant, and deserts are not too hot.
Like several other states, some of the most important and loved fairs and festivals are celebrated during the winter season in Rajasthan. Abhanari Festival, Navaratri, Dussehra, Rajasthan Kabir Yatra, Adventure Festival and the Marwar Festival are celebrated in October. November brings the Chandrabhaga Fair, Bundi Festival, Pushkar Fair and the Kolayat Fair while in December one can witness the Winter Festival of Mount Abu, Ranakpur Festival, Kumbhalgarh Festival. January sees the famous Camel Festival while in February, the Desert Festival is held.

Best time to vist the Top Destinations in Rajasthan

Top Places to Visit In Rajasthan

View All Places To Visit In Rajasthan 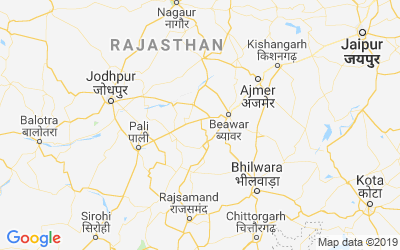