I have been to Andamans twice so far and if I was given a chance to go there again I wouldn't miss it for the world. There is no doubt that it's the most beautiful place that I have ever been to. Andaman has a lot more to offer than its exquisite beaches and abundant marine life. The tropical rainforest with strangest of all trees, roads along the coast, a house by the end of a farm which you always wanted, soft white sand and of course, the turquoise blue ocean. Andaman is beautiful. I don't mean to be philosophical or something but that place forever takes a part from you, it changes you.

So the first time I went there it was with my family for a 9 day-long trip. Many of you might correlate our parent's idea of a vacation? The trip was about seeing as many sights as possible in 9 days (basically, "sab cover kar lenge"). Then I had seen most of Andaman, save North Andaman. My dad, being quite adventurous, included a few destinations in our itinerary where hardly any tourists go (check out Parrot Island and Mayabunder. Only 2 tourist families in December peak season). In short, I had seen most of what Andaman had to offer during my first trip. But it was an easy trip then, all we had to do was give our plan to the driver when we arrived and from next day on we were all set. Where is the fun in that!

Here, I would like to tell about my latest experience which is yet another example of our bad planning but in the end it doesn't matter and you end up being a better traveller. When my friend called me telling about saying, "Hey, I'm getting a return ticket for Andamans for Rs. 7,500!" I didn't have to think twice. (Check the rates now I bet it's over 10,000 for 1 side) Remember this is early June we are talking about and these cheap tickets were for August end. Calls for long term planning with too many uncertainties involved. The very thought of being able to go to Andaman "again" was exhilarating.

Days refused to pass after we had booked the tickets. Given the lack of Paid Leaves at work it was a short trip of 5 days. Based on my past experience, I had devised an excellent plan for our limited time there.

Day 1 - Cellular Jail
Day 2 - Wandoor Marine National Park
Day 3 - A Short stop at Neil island and then to Havelock by afternoon
Day 4 and half of 5 - Enjoy Havelock
Day 5 - Back to Port Blair by night
Day 6 - Back to Mumbai - perfect!

Mind you that was only on paper. During the 3 months, we had for planning this trip all we managed was booking a hotel in Havelock. Rest of the bookings? we saved for later. Plus, who cares to read reviews if you had already been there once? you are already a pro, right? Or you think you are. Anyway!

We left Mumbai very early in the morning, and after changing a flight in Chennai, arrived at Port Blair by noon. Took an auto rickshaw and asked him to take us to a nice budget hotel nearby main market area. So he took us to Guru International. Nice rooms, very convenient location with every convenience facility within a 1 km radius + just Rs. 1500 per night, although we got this price after some bargain. After getting to the room, we managed to get a permit and tickets to Wandoor Marine National Park from their office which was close to the hotel and closes by 2 pm.

The Auto-wale bhaiya insisted on buying tickets for the ship to Havelock asap but my experience said it is easy to get the tickets why rush, so we spent the rest of the day sightseeing in Port Blair. Big mistake! Next day everybody kept telling us that it's a holiday so the ticket counter for Havelock will be closed, and there was no point in bothering about the tickets then. Another mistake, apparently the counter was open. 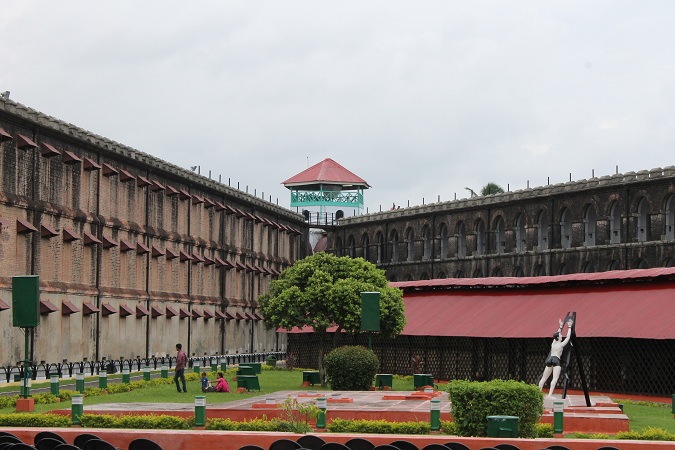 Next day early morning at 7 AM, we left Port Blair on a rented bike (Rs.400 per day) for Wandoor which is 21km from Port Blair, had breakfast at a nice little shack on our way and reached there a little before time, and meanwhile, we checked out Wandoor beach and museum. The ferry leaves for Red Skin Island sharp at 9 am. (Wandoor Marine National park comprises of a bunch of tiny islands out of which Jolly Buoy and Red Skin is open for tourists, one at a time, with Jolly Bouy open only post-October).

The moment we left foot on that island, the sight was unbelievable. A beach full of beautiful shells I had never seen before, that too bigger than my face in size! You can pay Rs. 500 extra to the divers there and they will take you for an amazing snorkelling session. You can spot amazing corals, strange fishes, octopuses and what not. According to me, Wandoor is a must-visit for everyone going to Andaman.  After this beautiful experience, we decided to spend the rest of our day on some "unknown to us" beach.

Andaman being a small island we thought it will be easy to find one. So we relied on local people for directions. Finally, we got to some beautiful but crocodile-infested area though couldn't tell what place it was. Lack of people around made us a little scared and we made a dash on our bike from there, and ultimately ended up exploring rural Andaman closely. On our way back found a lot of fancily dressed people going in the same direction. Out of curiosity, we followed them on our bike and got to attend Andaman Monsoon Festival where kids from all over Andaman and Nicobar were performing their traditional dance. It was one of a kind experience for us. 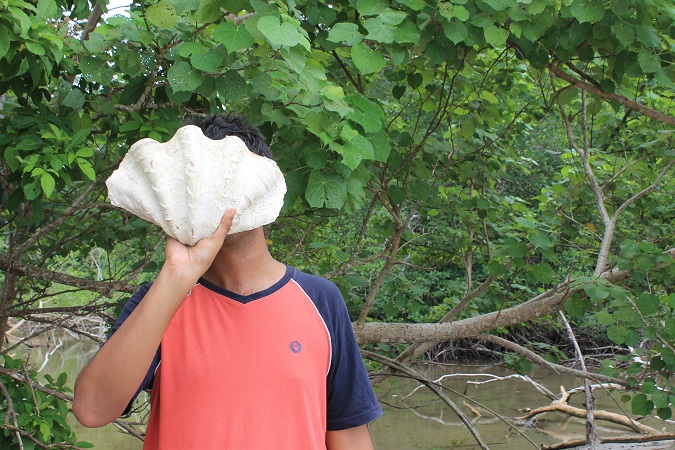 A massive seashell, bigger than a person's face! 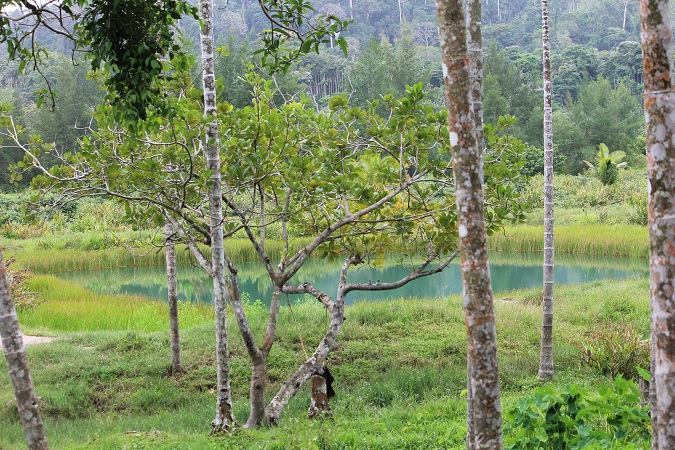 The next day was toughest for us, with a plan to go to Havelock and no tickets, we sure were in trouble. Did we wake up at 4 AM hoping to get on 6.30 AM ship? Didn't happen. It was 5 AM in the morning and already you could see hundreds of people in line for tickets in front of the counter which opens at 9 am. It is difficult for travellers like us to get tickets on our own since travel agencies/hotels send their people to book tickets for tourists every morning. There are only government ships plying during the offseason.

Best way to stay out of this hassle is to book Havelock tickets well in advance. Finally, after a lot of fight, we could get on a ship to Neil which they promised would also take us to Havelock. If it is your first time on a ship, don't just sit inside, get on the deck and enjoy the ride. If you are paying attention you might spot some flying fish (watch BBC life video for flying fish) in your way to Havelock. I have, during both my trips.

Again, in Havelock, we had booked budget Emerald Geko which offer basic bamboo hut right on the beach (price Rs. 1500 per night including breakfast). Emerald Geko was one of the best parts of this trip. 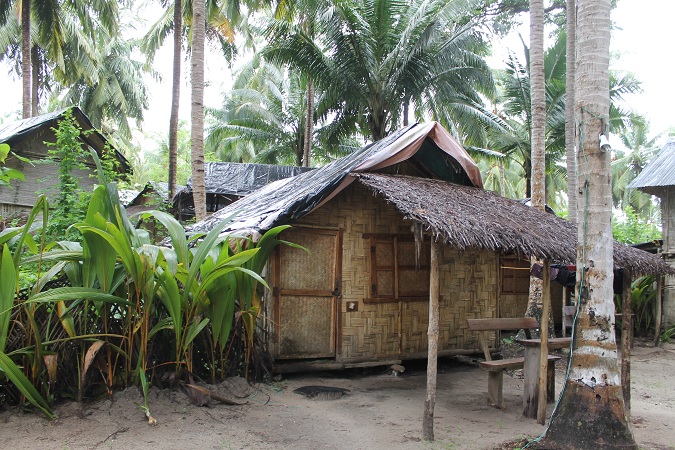 It has an open beach facing restaurant-cum-shack where everybody gets together in the evening to chat. We met Russians, Canadians, Spaniards and Americans, and surprisingly we were the only Indians staying there. Another good part about Emerald Geko is they don't offer alcoholic drinks. So you can buy cheap beer from outside and enjoy it in their restaurant with the delicious food they serve? win-win.

Next morning we rented a bike there and went to Vijaynagar and Radhanagar beaches, did some more sightseeing. (Do check high tide timings before going) Radhanagar is one of the most beautiful beaches in Asia and is ranked 6th on the list. A beach surrounded by lush green trees on one side, crystal blue water on the other and softest of sands, it ought to be most beautiful. During our stay in Havelock, the weather was cloudy with some shower (that's why they call it offseason, to enjoy the beach or scuba dive).

Nonetheless, we enjoyed it to the fullest. And if you are interested they also offer "swimming with elephants" for Rs. 1700 per head at Radhanagar beach, a Spanish guy at the resort informed us. The rest of our time was spent on the private resort beach hanging out with other people there. 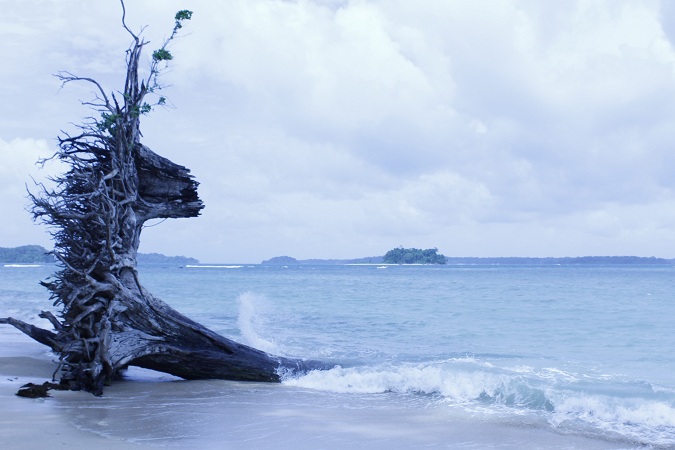 Finally, the trip to Andaman was over, it was time to pack our bags and come home with a heavy heart full of amazing memories.

The Barefoot At Havelock

Places To Visit This Independence Day To Experience Patriotism

Best Parties to Revel In For the New Year Celebrations!