Delving into the forbidden – the Nelang Valley 7

Hidden away on the remote border district of Uttarkashi, this beautiful valley at the historically famous Indo-China border stands at a height of over 11,000 feet above the sea level. It gives rise to one of the largest tributaries of the Bhagirathi River, the Jadh Ganga. The Jadh Ganga is also a point of dispute for India and China; the valley being claimed by China and controlled by India. 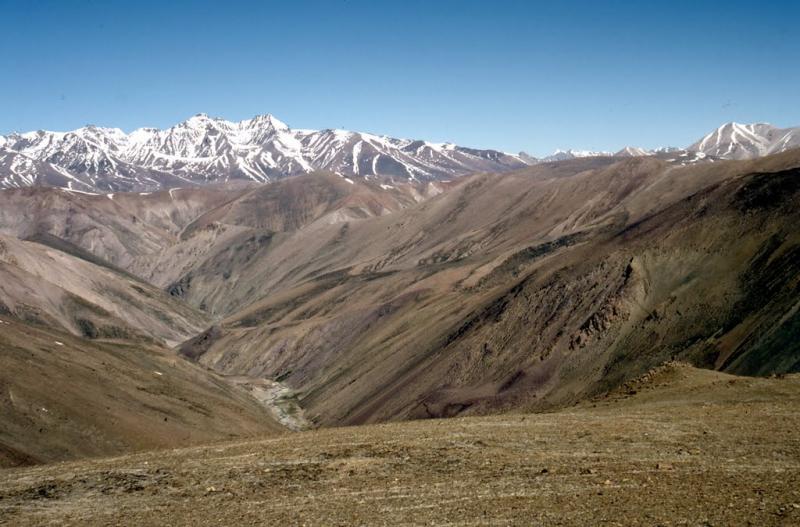 North to the peaks of Himachal Pradesh from S of Tsangchok la. Photo by Romesh Bhattacharji

The original name of Jadh Ganga was Jahanvi. Legend goes that the Sage Jahnu was very furious because the River Ganga kept flooding the place and damaging his hermitage. In his anger, he drank the whole river in a single gulp. Later, when he had calmed down, he released the river, which theoretically became his daughter. Hence, the river came to be known as Jahanvi. 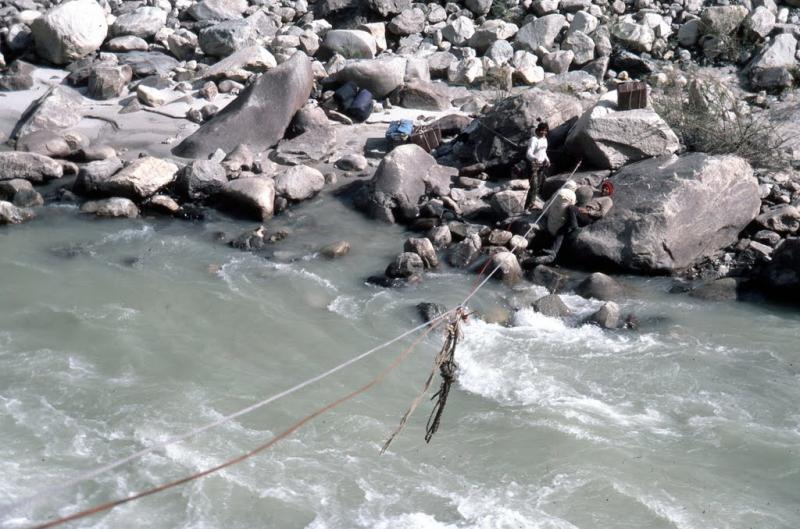 Crossing the Jadhganga near Tirpani to go up Guli Gad to attempt Chirbas. Photo by Romesh Bhattacharji.

The valley lies to the north-east of the rushing waters of the Jadh Ganga. Located about 5 km from Dhumku, Nelang is one of the two deserted villages in the valley. Nelang (or Nilang) traditionally means the ‘place of blue stones’. It housed the Jadh people that gave the valley its name. They were known for their trade in cotton goods, metals, and sugar and oil seeds with Tibet up until 1962. The Sino-Indian border conflict of 1962 resulted in civilians having no access to this paradise. 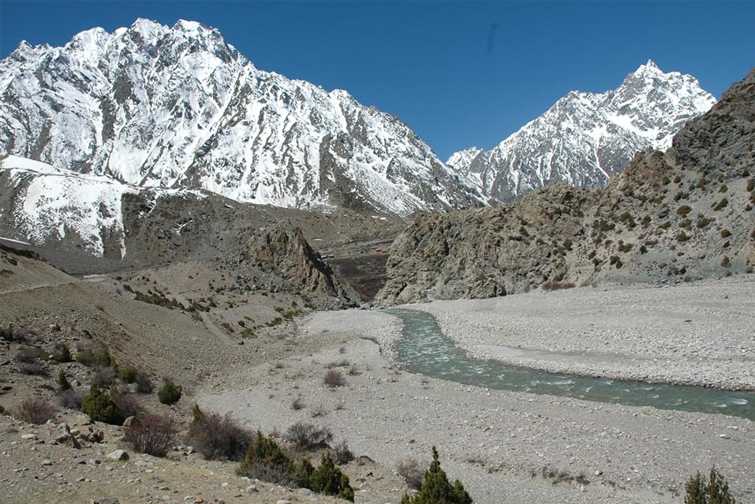 A view of the Nelang Valley (Source)

This is the same region that Heinrich Harrer had used during his dramatic escape from being a war prisoner of the British India, in 1944. It is also the same valley where the legendary British explorer JB Auden (the younger brother of the famous poet WH Auden) ended up while exploring the tributaries of Bhagirathi. 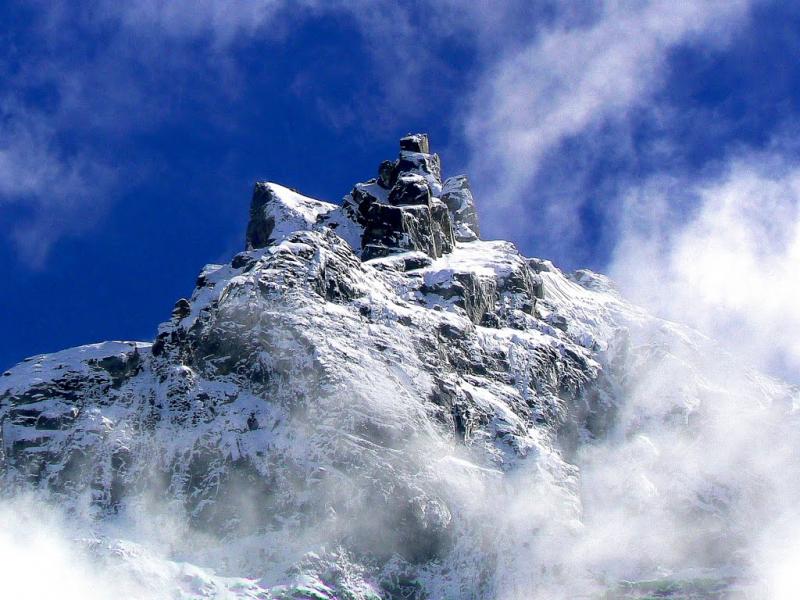 Ask any mountaineer about Auden’s Col (it is named so because Auden was the first person to cross it) and watch the excitement on their face. They’ll tell you the story of how he wanted to find a route via Nelang to cross over to the Alaknanda Valley through the Arwa Col (as named by Auden), but was unsuccessful in his attempt. 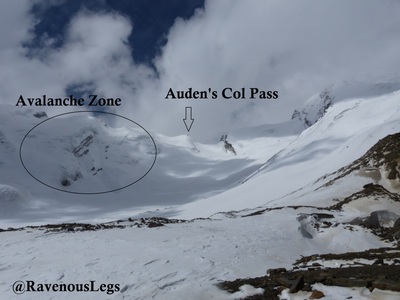 The 1962 conflict made sure that no more exploration of the area is possible. But when something is forbidden, what follows next are adventure, exploration and discovery. Since then, there have been numerous attempts by civilians to explore the valley. Most recently, in the summer of 2011, JP Gupta from Bangalore led a team to complete the daunting task of crossing the Arwa Col from the Alaknanda Valley into the Nelang Valley. 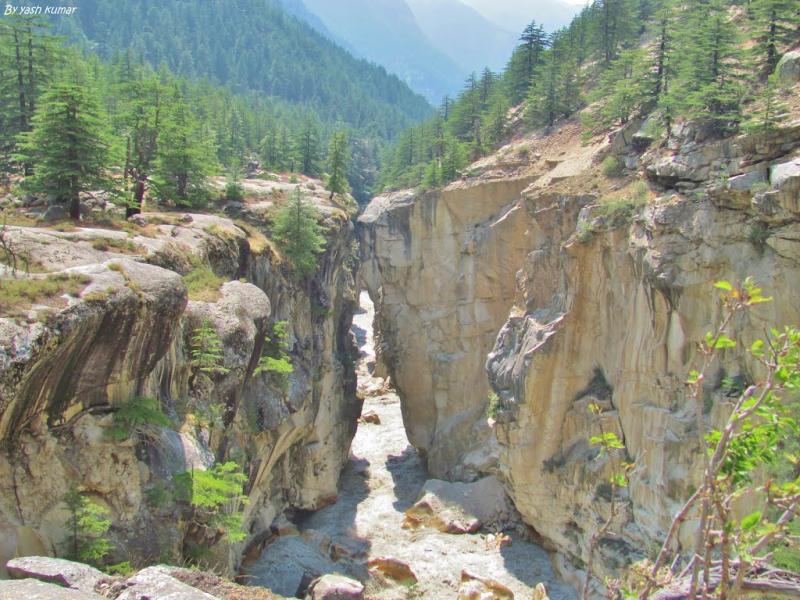 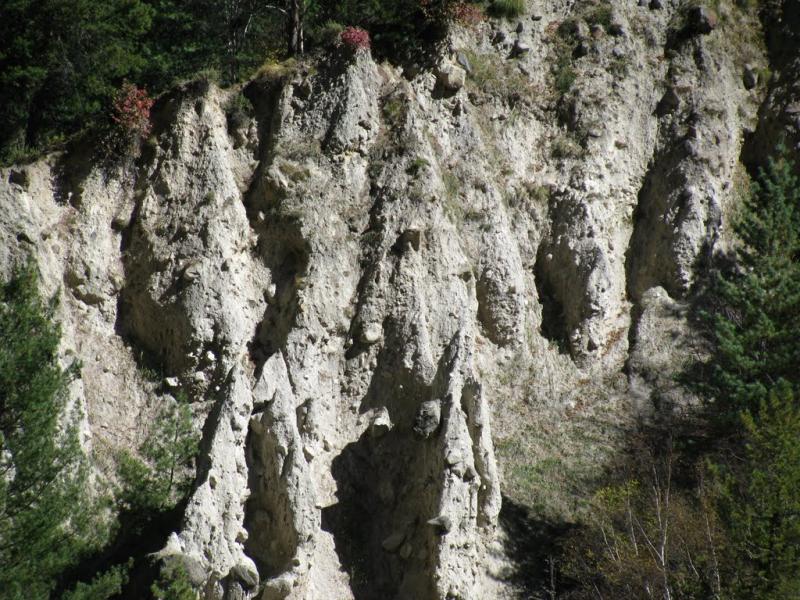 However, the weather conditions hurt their attempt. In 2012, Delhi-based trekker Ashutosh Mishra along with his team made the first successful traverse from the Nelang to the upper Saraswati Valley.
But now, exploring the Nelang Valley and its ancient passageways just got a tad bit ‘easier’. As a step towards promoting eco-tourism, the Uttarakhand government finally opened the valley to tourists and adventure seekers, starting May 12th, 2015.
The valley is open during the day for a few restricted hours. Only six vehicles are allowed to enter the area with just six tourists each. You can take a safari jeep from Bhairavghati which is about 25 km away, but make sure the jeep is registered with the forest department. So, pack your bags and get to this unknown land and explore the adventurist’s delight that is the Nelang Valley.

A Literature and Media post graduate, Deepika Singhania is a freelance writer, editor and a hardcore feminist. She is an avid reader and a football enthusiast, who loves cooking and travelling along with having a strong affinity for chocolates, Harry Potter and the Bangalore rains. In her free time, she writes for Holidify, the Highest Rated Travel App in India.