Best Malls In Mysore For Shopping, Entertainment and More!

Till 2011, there were no malls in Mysore. The locals would have to travel to the nearest commercial hub, Bangalore, and international tourists faced problems with the regional stores. But now, Mysore boasts of its malls, with many similar projects under construction. A unique feature in the malls of Mysore is that they are all built in the shape of a palace and have a dome-shaped top, to keep its architecture of the city consistent.

Here are the malls in Mysore and all that you need to know about them. 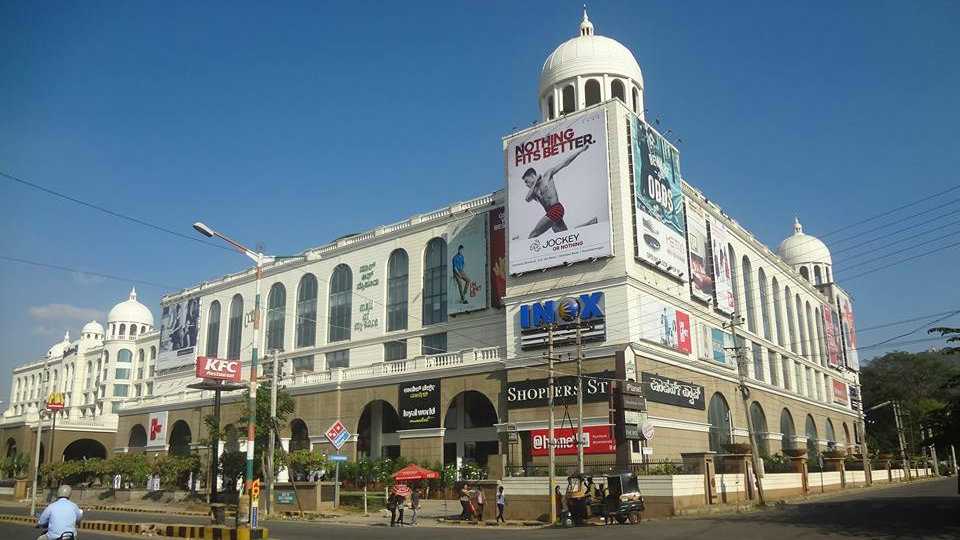 Mall of Mysore was the first mall in Mysore. It is the epitome of luxury shopping and guest hospitality. Stores like Shoppers Stop, Levi’s, United Colours of Benetton, FirstCry, etc. are situated here. The mall also offers bowling and other games, a supermarket and a food court with varied cuisines. Inox, a four-screen multiplex is also located in the Mall of Mysore.  Amongst the amenities are free wifi in every nook and corner of the mall, and baby care rooms.

Highlights: It is located near the famous Race Course and has the Chamundi hills in the background
Address: No.C-1, M.G Road Indira Nagar Extension, Nazarbad Mohalla, Mysuru, Karnataka
Timings: 10:00 AM to 10:00 PM

Forum City Mall is the largest mall in Mysore. It is a project of the Prestige Group, which has built similar malls in other cities like Mangalore, Bangalore, etc.
This mall in Mysore is functional since 2018 and has a lot to offer to its visitors. It houses international and national brands, including H&M, American Tourister, Crocs, etc. and chains like Lifestyle. It has a supermarket, a huge food court and a six-screen multiplex, PVR.

BM Habitat is the second oldest mall in Mysore, opened in 2011. It accounts for several firsts for the city- its first EasyDay supermarket, first multiplex and the first Barbeque Nation. DRC Cinemas located in BM Habitat Mall is the most popular multiplex in the city. It is a favourite of the locals. BM Habitat mall in Mysore has a wide variety of brands like Reliance Digital, People, Fastrack, etc., but its highlight is Karma Fashion’s Divine Mantra. It also boasts of Big Bazaar, Gelato, KFC, etc.

Garuda Mall is one of the most vibrant malls in Mysore. It was initially located only in Bangalore. The year 2013 saw the opening of this mall in Mysore. Garuda mall is the hub of the best national and international brands, pocket-friendly offers and sales, an explicit food court and many events. Brands like Health and Glow, Hidesign, Forever 21, Westside, Vero Moda, US Polo, The Plus-Sized Store etc. and chains like Pantaloons can be found here.

Central is a fashion chain that houses premium national and international brands. The Central Mall is in almost every city in India. It is a project of Future Lifestyle Fashion of the Future Group. With its vast expanse across India, it offers a wide variety of apparels, shoes, bags and other accessories. Central is known for its reasonable offers and sales, which attracts shopaholics now and then. In Mysore, Central Mall is undoubtedly amongst the most visited ones.

The Banni Central Mall is in its final phase of construction. While some of the stores are open now, the entire mall is going to be open to the public soon. The hiring for various positions in the mall has begun. The mall seems to be a promising one. Its tagline, “One destination, many experiences” has already created a sense of eagerness for Mysoreans, and I’m sure they can’t wait to visit it.

Highlights: Located at the prime location of Banni Mantapam, this mall in Mysore is well known for its residences, convenient commuting options and its serenity
Address: Nelson Mandela Rd, Bannimantap, Mysore, Karnataka

Apart from the above-mentioned malls in Mysore, the city also has some other upcoming malls, including Parkway Mall, which is supposed to be the biggest mall in Mysore, Mittal Mall, which will also have Inox multiplex, Capita Mall, Inorbit Mall, etc.

All the existing and upcoming malls of Mysore serve as the perfect example of ‘modern tradition’. They are a contemporary addition to the traditional vivacity of Mysore. Tourists from all over the world and the locals of the city are availing the offers in the dome-shaped malls of Mysore, are you?

Places to visit in Mysore

View 36 places to visit in Mysore

Temples in Mysore for a Perfect Pilgrimage Experience

Historical Places in Mysore for a Peek into the Past

Places To Visit Near Mysore For An Extended Vacation

Water Places to Visit near Mysore

Mysore Dasara 2019: A Guide To The Most-Awaited Festival of Mysore

PHOTO TRAVELOGUES | Chapter 1: Mysore - A temple, a palace and monsoon

Things to do in Mysore

Beautiful Parks in Mysore to Relax and Rejuvenate

Hill Stations Near Mysore For An Extended Holiday

Stunning Waterfalls near Mysore That You Ought to Visit

Palaces in Mysore For A Historic and Regal Experience

Bandipur Forest Fire Eats Up Thousands Of Acres Of Vegetation!

City of Palaces: Historical Cities of Kolkata, Mysore and Jaipur

A road-trip to Coorg & Mysore

Villas In Mysore For A Staycation

Best Places To Stay In Mysore to Enjoy This Beautiful City

Resorts Near Mysore For Family

Resorts Near Mysore For Couples

Bed And Breakfast In Mysore

Best Luxury Resorts In Mysore for a Luxurious Vacation

Hotels In Mysore With Bathtub

Resorts In Mysore With Pool

Resorts In Mysore For Family

Resorts In Mysore For Couples

Temples in Mysore for a Perfect Pilgrimage Experience

Historical Places in Mysore for a Peek into the Past

Places To Visit Near Mysore For An Extended Vacation

Water Places to Visit near Mysore

Mysore Dasara 2019: A Guide To The Most-Awaited Festival of Mysore