The Secrets of the Monoliths in Meghalaya #TWC

Some of the greatest treasures are safely tucked away in distant corners of India’s lesser known regions.At times, you stumble upon them to have an invaluable experience and then the hitherto unknown stories come to life.

Here is an account of one such treasure of monoliths’ exploration in Meghalaya. 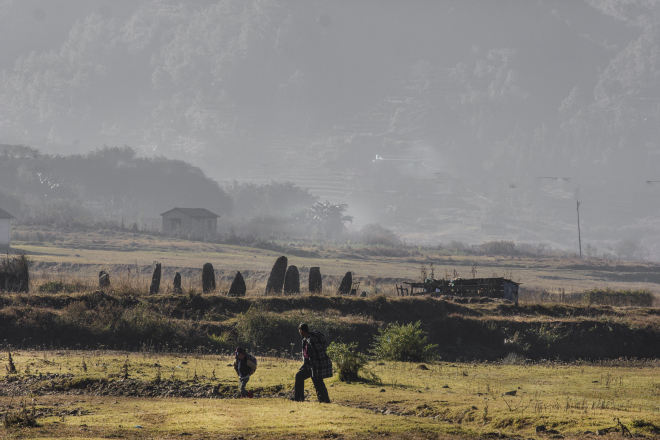 A village in East Khasi Hills, which may not be found on Google Maps

Monolith is a symbol of remembrance in the Jaintia Hills.

The cluster of monoliths have been erected to mark the reigns of the erstwhile Jaintia Kings, holding a significant event in the history of Meghalaya.

There are many folktales justifying the presence of monoliths and each of these is amusing enough for me. Searching for these stories and portraying them in the images was probably the highlight of my travel to Northeast. At times I found them clutched between two Khasi houses or near a football field or hidden in the dense forest but the best ones were on the top of hill in the midst of nature peeping down to the valley. 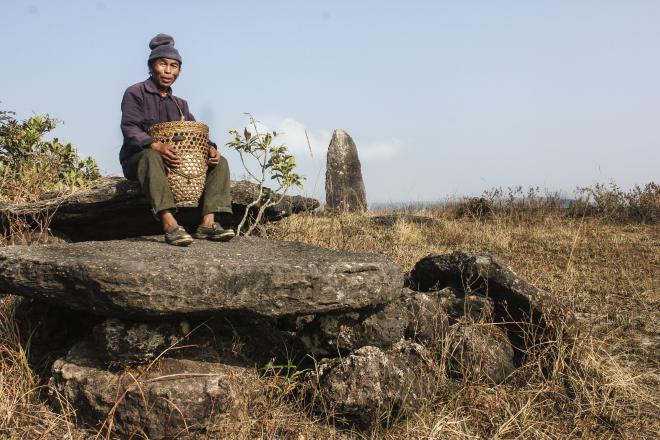 The largest cluster of monoliths is in Nartiang village, Jaintia Hills. The site can literally be called a jungle of monoliths.

These monoliths cover a wide complex of about 100 metres in diameter. There are two parts to a monolith: the upright part is known as ‘Mehris’ or ‘Ki Moo Shynrang,’ represents male and the flat table stone represents female and is known as ‘Ki Moo Kynthai’ .

The tallest and biggest monolith is about eight meters in height, two meters in breadth and half a meter in thickness. There was a local market adjacent to this park and people were casually crossing the park while children were playing atop of the monoliths.

I fear these would break down one day, if not protected by the locals and the Government. Near the football field in Dawki village

As I wondered about how these huge stones were erected in such a large number, my friend in Meghalaya explained to me that the people here used to be very strong and as big as giants. In ancient times, Nartiang used to be the summer capital of the Jaintia rulers, who spent about six months here. Some scholars say that these monoliths were erected in memory of the establishment of the market from Raliang to Nartiang.

My guide elaborated on the stories, “one rainy afternoon Luh Lyngshkor, Jaintia ruler went to an old woman’s hut at Raliang, a village near Nartiang, seeking a bamboo to protect himself from rain. But the woman declined Luh’s request by insisting that he, being a well-built man, should use the giant stone slab at the market to shelter himself. On hearing this, Luh went to the market and used the giant stone slab for his shelter from the rain. Luh carried the slab till he reached Nartiang where he kept the giant stone slab and this event marked the shifting of the market from Raliang to Nartiang. Since then, the market at Raliang ceased to exist. Nartiang market place is located to the north of Nartiang monoliths.” My guide and friend trying his hands on camera at Jungle of Monoliths, Nartiang

Nartiang is the one those sites which has been recognized by the Tourism department and efforts to conserve it are being made.

While in my journey from Shillong to East Khasi Hills and then to Jaintia hills, I explored many other sites of monoliths. There are a number of ancient monoliths and table stones, which are either memorial of the deposited ashes of the dead in cairns or cenotaphs, or commemorating memorable events. 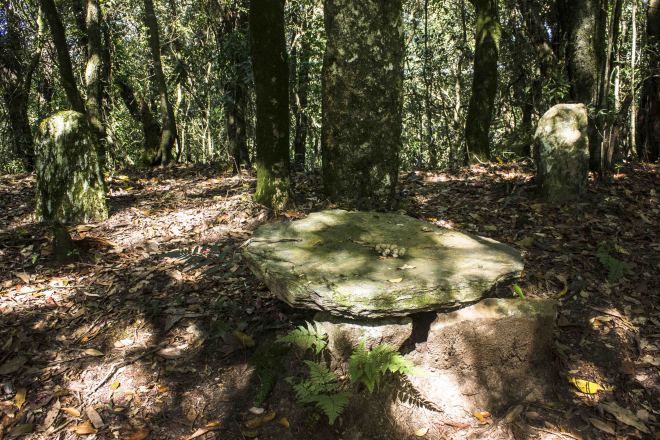 The table stone and Monolith in Mawphlang or sacred forest

Another wonderful site was Mawphlang or ‘sacred forest’ which is also a bundle of fascinating folktales.

The good thing is to showcase the rich cultural heritage of the Khasis under one-roof, the Khasi Hills Autonomous District Council now organizes a Monolith Festival. This is a first of its kind, with an aim to promote, preserve and conserve the tribal indigenous cultures. The festival is held in the month of October and is a colorful fiesta.

The photographer and storyteller within me established a relationship among humans, nature, history and stones while hoping to return to celebrate and explore more secrets of monoliths.