The idea of cycling to Nandi Hills sounds weird at first but it comes with its own set of adventure and thrill. Its way different from regular cycling on planes, cause the speed drops to less than 3 km/hr while the effort required increases by folds.

Why Nandi Hills is an excellent idea for a biking trip

Nandi Hills is a small hill station north of Bangalore and is about 75 km from the city. The hill is known for being Tipu Sultan’s Summer Palace. The famous Tipu’s Drop (the cliff from where Tipu Sultan used to throw off prisoners to death) makes the hill popular among tourists. The proximity of Nandi Hills from Bangalore and the popularity of cycling around Nandi Hills made it very easy for us to decide our cycling destination. Start of the cycle trek from the base of Nandi Hills

Here’s our story of the Nandi Hills Bike Trip, Read on:

We planned our cycle trip in May, 2013. There were eight of us and we booked a cab from Whitefield. We paid Rs. 2,900 for a round trip. The cost permitted us to travel up to 250 kms. Since people were joining from different parts of Bangalore, we ended up travelling more than 200kms. You can call up +91-9845947746 to book the cab. The driver was friendly and coped with us at all places. We left for the hill at 5 in the morning to avoid the heat of sun while climbing up. It took us about 1.5 hours to reach the base of the hill.

We had already rented cycles from Icycle. They charged us Rs. 500 per cycle and provided the cycle at the base of the hill itself. The cycles provided by them were quite good and were in good condition. Before we started the climb, we were briefed by people representing Icycle and they advised us to warm up a little by cycling 2-3 kms on the planes before going uphill. The hill top is about 8 kms from the base.

Cycling uphill becomes very difficult if going on a regular ‘gearless’ cycle. The cycles provided to us had 21 gear combinations (some cycles had 24 combinations), and we would typically limit ourselves to gears 1, 2 and 3 on our way up. The idea is to keep moving up, at whatever pace it be. Protective gear is a must, Icycle provided us with helmets and gloves but elbow and knee guard should also be brought along. Avoid wearing trousers as they might get entangled with the cycle chains. 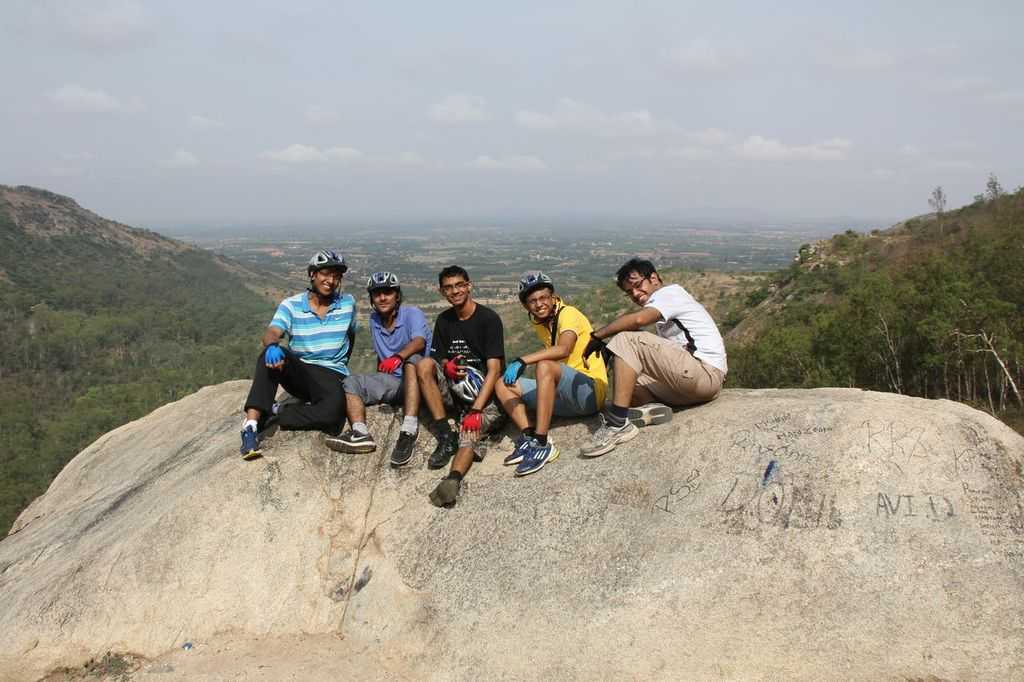 It took us a little less than 2 hours to reach the top. The road to the Nandi Hills is paved, therefore lot of motor cycle enthusiasts speed their way up to the top. On the way to Nandi Hills, you might find monkeys who would grab any eatables they eye upon.  Going up at a slow pace might bore some people, but the thrill in coming down the hill helps keep the enthusiasm at par. 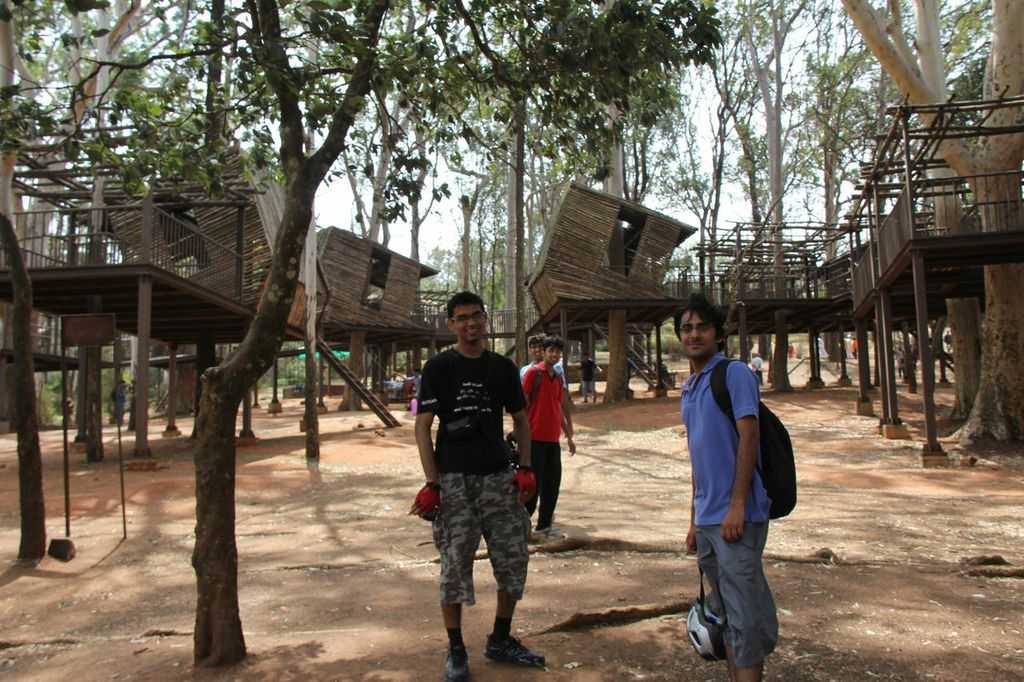 Huts on top of the hill

There are small food outlets on top of the Nandi hill which sell biscuits, fruits, South Indian dishes etc. There is also a water reservoir with steps surrounding it. It gives an antique look to the place. Sequences of a song from the movie Rowdy Rathore were shot here at the Nandi Hill. Tipu’s Drop should not be missed. We stayed on top for more than an hour. 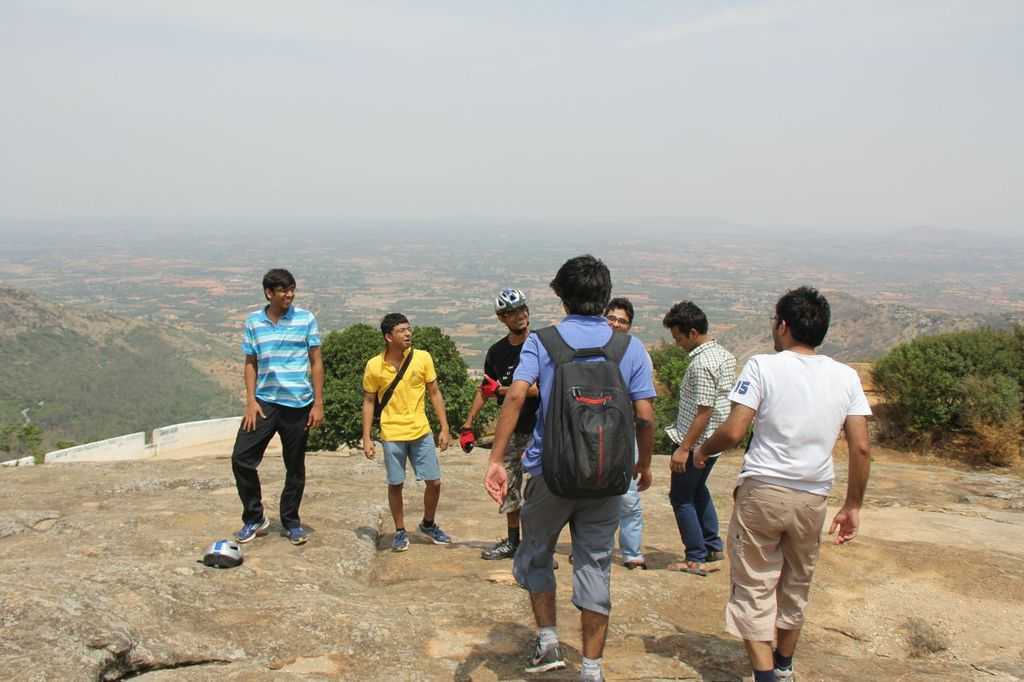 Tipu’s Drop in the background

We started our descent at a brisk pace. For most part of the ride we didn’t require to pedal as the speed of the cycle would reach to more than 50km/h due to gravity itself. The feeling of cycling at this pace is unmatched. We were actually trying to posture our body to minimize air resistance due to drag. It is here that cycles with strong brakes come in handy. We reached the base in no more than 20 minutes. One of our fellow cyclists got hurt trying to avoid hitting another cyclist who was overtaking him. 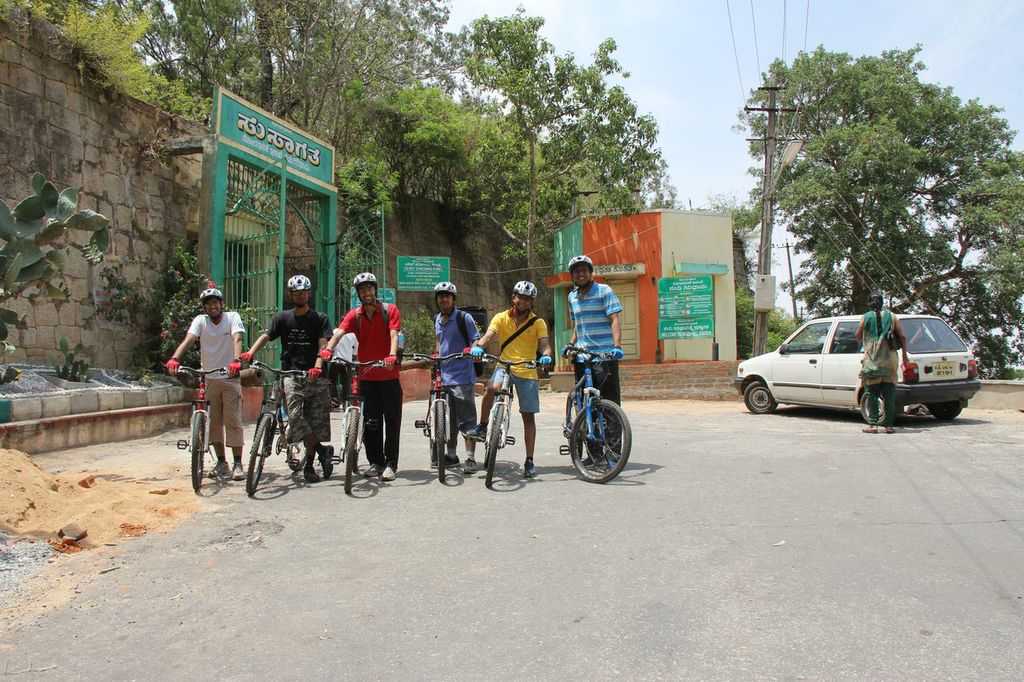 Bangalore to Nandi Hills by bike can be a good start for beginners. As mentioned earlier, apart from cycling there are lots of things to see on top the hill.

If you liked this post, we suggest that you have a look at Cycling in the Western Ghats

And if you are feeling more enthusiastic, here’s a little guide to mountain biking.

Places to visit in Nandi Hills

Places to visit near Hyderabad