This was a 2 day trip from a Hyderabad internship. I wish I had a more interesting background story to contextualize the escape. But alas! The days of the beat goofs are gone.

However the visit was a sweet dream – a sweet flirtation out of routine. I took the night bus from Hyderabad to Bangalore. Hot, humid Hyderabadi night slipped out of my eyes to work its secret magic of transmutation and when the spell of sleep broke there it was – the sweet cool, breezy Banglorean morning.  It was all very exciting. Lines of trees dancing to the rhythm of early-morning wind, visions of farms and hills passing – the morning looked like a sweet cherubic child holding the promise of a great day. And Bangalore looked promising just like the morning the hung above it.

Somewhere on the highway I saw row of houses with amusingly low boundaries. These had to be some sort of a joke to troll incomers. The bus rushed and that train of thought rushed too. In Bangalore we met at a friend’s, took care of things not worth a mention, hired a car (lucky deal – 1500 for a day) and off we zoomed to Nandi Hills. After some initial hiccups, thanks to our noob driver, and the viscous traffic of the city we were out, on the road. The wheels of the hired Linea stuck to the tar and we went on listening to music of the wind and passing horn-tooting trucks which are creatures of the highway. So after an hour of straight drive from Bangalore we were at the base of Nandi Hills.

This was a village at the base of Nandi. There was a long road – straight with the precipice of the beautiful mountain right in front of us. A signboard by the state tourism department provided further assurance beyond Google maps. For a place as famous as Nandi Hills is, it was quite reassuringly aloof. The crazy commercialization had not penetrated so far into the village. Both sides of the road were lined by trees behind which lied vast expanses of farms. And in the distance, the mountains stood above them like grave guardians of the civilization – high and wide. It was almost like a motherly embrace that it extended over the village … with wide open arms covering half the circular horizon. Little hutments and huge sprawling inns co-existed amazingly. They were quiet and in absolute harmony with the place. Much of my perception is inevitably flavored by the time of the day. We had reached the point at 530. A peaceful dark blue dusk washed all the existence. It was good.

At a crossroad with the statue of Nandi installed in the center and a school just across, we asked a passerby what time the Nandi Fort closed. A local friend made her useful and acted as the translator. I was just looking at the school there and wondering about the kids that were born there. These would be true children of nature learning every moment from the immense mountain that was going to overwhelm us so much. The old man said it was open all the time.  A little further up the road another person told us it would close at 6. We decided to go with the latter and accelerated. We would never find out for real though.

Another lesson learnt – mountains were not meant to be scaled! They are perverse by design. They inflict on you – no matter what you are. The ascent used up almost as much oil as the journey of 50 or so kilometers on the road had used so far. Once we were on top, we were almost out of fuel. The ascent began cool and easy with gentle turns of large radius with small eating joints in the beginning and trees and the bottomless valley beyond them later. At the same time the other side had almost vertical precipices which automatically brought the thought of landslides. The gentle ascent of the bottom was soon replaced by the frenzy of hairpin curves as we moved higher.  This was the first visit to a hill and every turn was a roller-coaster extremum giving similar gut-churning.

The face of the hill looked like an elaborate sculpture in which some mountain-size Donatello had leisurely carved these soft snaky curves with flourishing shots of hand. This wild fancy of a mountain-size family would become all the more common once on top.

Finally we reached the entrance. And I was wondering about the person who decided to climb this thing, let alone make a fort here. The top of Nandi Hills has remains of Tipu Sultan’s fort. Over a cleared space of land meant for parking we parked the car and rushed to the entrance fearing the gates might be closed. 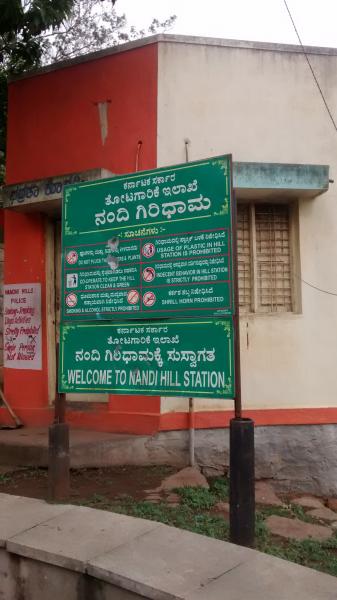 Scaling stairs bifurcated in some quake far back in the past, we entered the huge black gates that were once built to resist the strongest force and were now resignedly watching every tom, dick and harry pass through them glancing at it stupidly. This was funny. 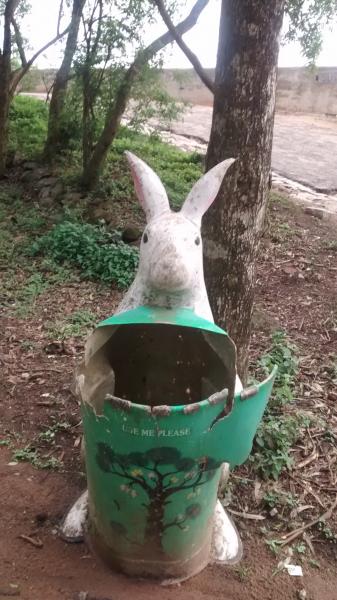 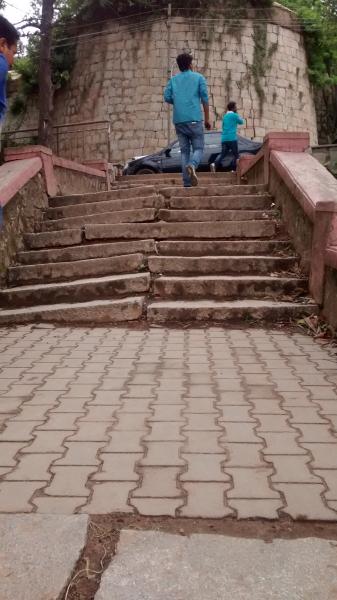 Watched over by a spooky rabbit-faced dustbin, we followed the path that was carved by workers some couple of hundred years ago. Finally walking and singing, getting enfolded in the maddening energy of the strong wind and overlooking at the cruel precipice of the hill we were traversing, we finally reached the roof of the plateau – some 4000ft above sea level. 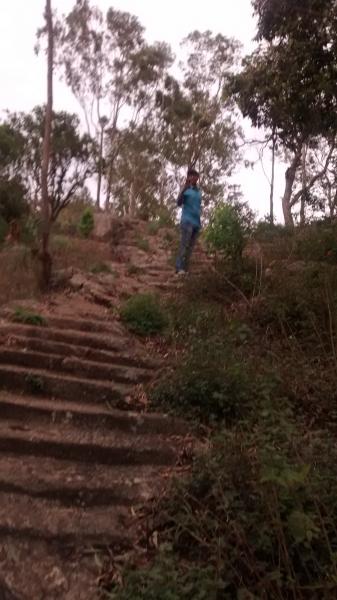 What followed was overwhelming. This was a sloping land ending into a humble railing like that of a fort. Homo sapiens were scattered in pockets doing the most human thing imaginable – taking selfies. The famous Calvin Hobbes cartoon regarding alien invasion crossed my mind like a shooting star.

As I said before, we were blessed by the weather. It was cloudy evening with very strong wind. There was a constant white noise that seemed like the default state. Blended like the natural state of the world. No speak – just a harmonic sound of nature – the final equilibrium of the rustle of trees, bushes, wood. The sun hung in the horizon like a sweet red fruit hidden behind cloud-leaves outside a princess’ balcony. The mountain spread around tapering and then abruptly falling into a precipice accurately forming the shape of a prostate bull.

This seemed like the other world that is deserved by the good – perhaps the reward that every person unwittingly expects when he chooses right over wrong. In the skies was a holy passage of great clouds – large like villages – purposeful like a legion set out to shower their relief on some sorrowful piece of land. I wondered that a similar fixation must have given rise to the fox’s wedding folklore in the plains.

In the distance the hills were shadowed by a transparent screen of mist granting it a dreamy sheen. Indeed the whole experience was dreamy. The whole vision was transformed to a dreamy softness by the mist that filled the air and made it heavy. The sight of the plains was dumbfounding. Houses reduced to measure of ants. It all seemed like a plaything of the children of this amazing mythical mountain-size that I was obsessed with. 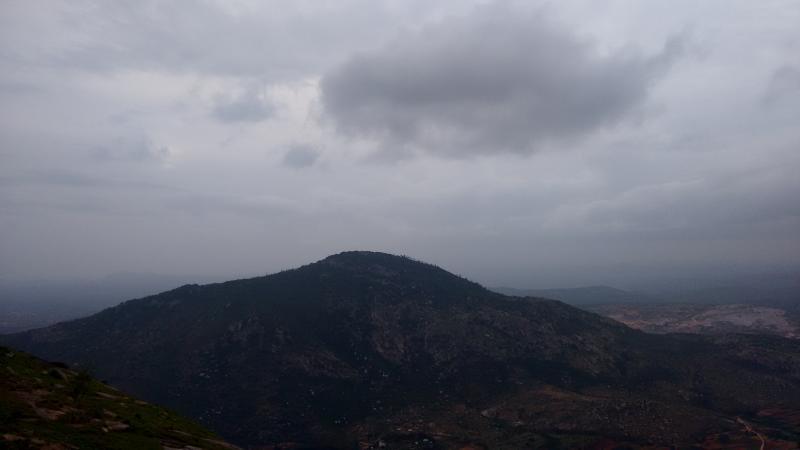 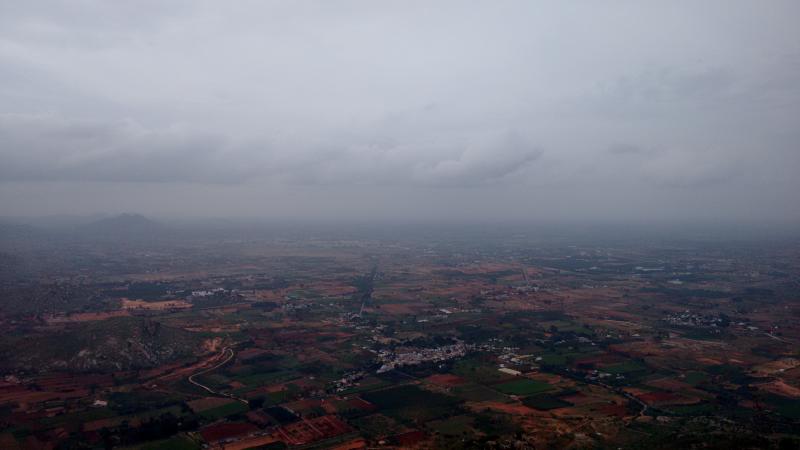 This whole experience was a jolt to perspective – just how tiny and inconsequential the things we worry about are. But then It only makes sense given that this is God’s seat.

After this we had gone to night trek to Kuntibetta in Pandavapur with a local adventure group but that was all shrouded in the night. There was less to be seen. Nandi I saw through the blue godly haze of the dusk – and with almost a premeditated lust for savoring it. The trek was more of a racy experience when I had less time for romance urged by baser stimuli like saving my life from falling off a rock! 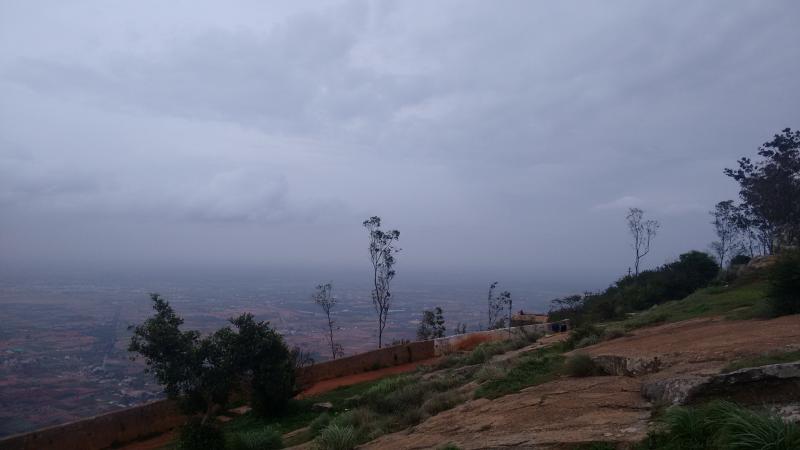 Places to visit in Nandi Hills

Places to visit near Hyderabad