Best Experiences and Things to Do in Varanasi 2

Varanasi, or Kashi as it is lovingly known throughout the country, is the very essence of spiritual peace and consciousness. This is the place to be if you’re looking to find peace and consciousness. Banares has a religious and cultural identity of its own, unaffected by time and tide. There are plenty of places to visit in Varanasi where you can relax and have a good time. Whether one takes a walk through the famous lanes of Varanasi, which give the city its most commonly known epithet – “galiyon ka sheher“, or chill on one of the many different kinds of ghats that the city possesses, Varanasi never once fails to enthrall with the plethora of places to visit in Varanasi! So if you are (and you should be!) planning a trip to Varanasi, here’s how to make the most of it. Read on…

Chill at the riverfront: Places to visit in Varanasi

Banares is also the City of Ghats and any serious traveller or spiritual seeker or both will be loath to not pay a visit. If you are interested in a day on the Ghats, here’s the way to do it! Start at Assi Ghat early in the day. Welcome the sunrise sipping a hot cup of lemon tea. Once you’re at the riverside, start walking to your left. Banaras was designed in the shape of a bow, each ghat leading to the next. Take off your footwear at any Ghat that you like and dip your feet in the river. One will be mesmerized by the early morning sights that Varanasi has to offer. Whether its the red apple that rises in the East or the number of people that dive into the river for a swim or the sheer number of devotees and saints offering Suryanamaskar, a delightful morning awaits you. One can also go to the Dashashwamedh Ghat before the sunrise and get a glimpse of the morning Aarti in sync with the rising sun. These are some of the finest ghats and places to visit in Varanasi. Take your camera along and bring back memories of the finest early morning that you have ever experienced! 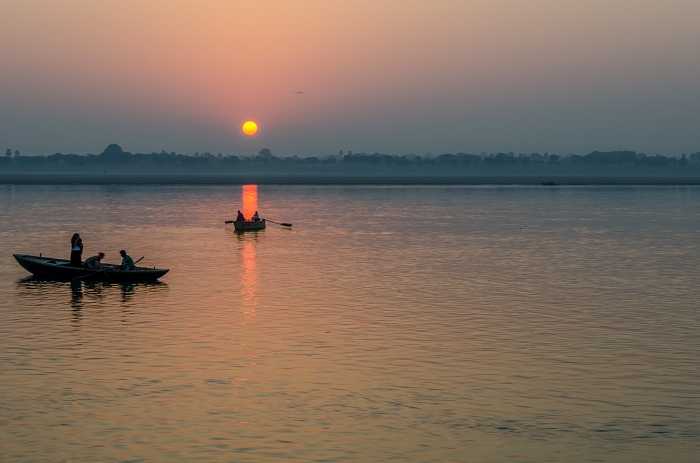 If you don’t have a penchant for walking, hire a boat at one of the Ghats and take a tour alongside the river. Let the riverside breeze fill your lungs and let the spirit of Varanasi fill your soul.

The other Ghats, somewhat lesser known are also a treat for hungry souls. Try Scindia Ghat, Bhadaini Ghat, Reeva Ghat, Kedar Ghat and Panch Ganga Ghat for an awesome experience. Manikarnika Ghat and Harishchandra Ghat are the two main burning ghats in Varanasi that are alight with funeral pyres all the time. Kashi is the place to seek moksha from the cycle of life, hence death is a constant part of life in Varanasi.

If you’re planning a trip to Varanasi, we’re sure you’ve already planned to see the evening Aarti at Dashashwamedh Ghat. You have good reason to! The aarti starts sharp at 7.00 P.M, so the key is to reach early and get a good seat. Reach the Ghat by 6.00 P.M and pick your seats as you please. There are boats moored near the ghats in which you can view the aarti, another utterly sublime experience. 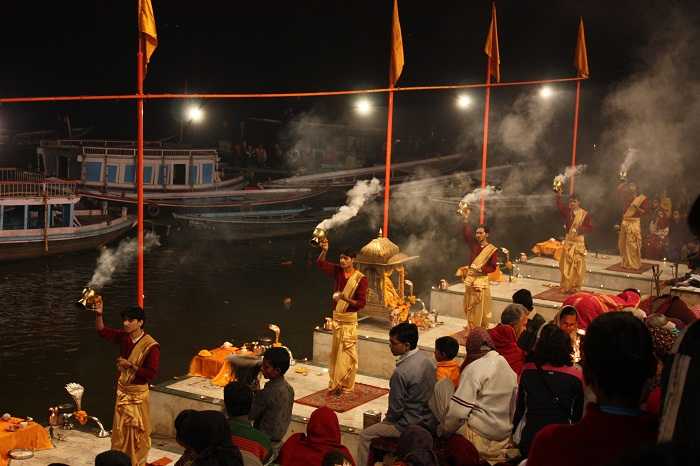 Note: Do not agree to pay more than Rs.50, as the boat-owners are a huge chunk of the world-famous thugs of Varanasi. Also, if you wish to take a boat-ride along the ghats or to the other side of the river (a sort of island that stretches as far as the eye can see), do not pay more than the fair fare. A motor boat ride should not cost more than Rs.40 and a manual boat costs around Rs.200-300 for an hour.

Take a detour in the Lanes of Varanasi

The name “City of Lanes” is the exemplification of the Kashi of yore. Serpentine lanes wide enough for two persons at the most lie at the very heart of Banaras. If you’re going to be up early, you might as well soak in the morning experience of Varanasi, popularly known as “Subah-e-Banaras“. Savour the jalebis that are fried at first light in the city of Varanasi while you tour the lanes at a time when several music maestros, big and small, are busy at their daily vocal practice. Food for the soul, right? 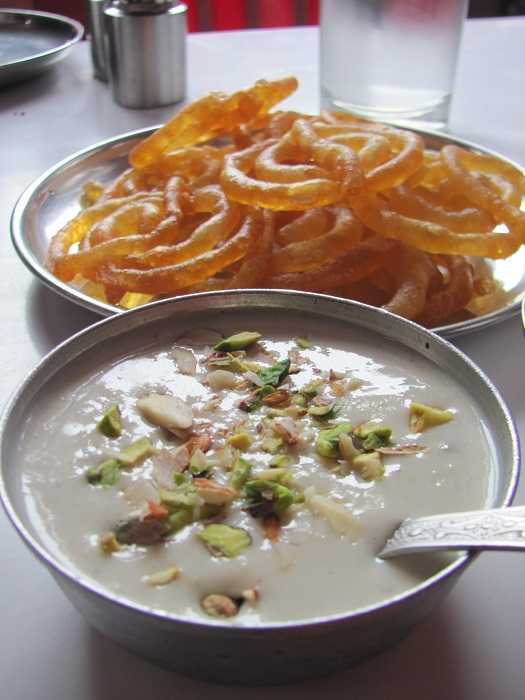 The lanes to watch out for are the – Vishwanath Gali, Bengali Tola Gali, Kachauri Gali, Khowa Gali, Chitraghanta Gali, Bramhanala Gali and Nandan Sahu Lane. These are the places to visit in Varanasi. You simply must! Shop for various handicrafts in the lanes including trinkets and authentic sarees, junk jewelry, copper and bronze artifacts and all kinds of religious handicrafts. If you ever imagined any kind of replica of a Shivlingam, you’ll find it in Vishwanath gali! Each lane is famous for its little eateries and restaurants. Savour the sumptuous Banarasi delicacies every time you take a break from the walking around and shopping.

The City of Lanes (Source)

Note: For those who wish to buy Banarasi Silk sarees or fabric, the labyrinth-style lanes are your holy grail. However, bargaining is key here. Also, it helps if you can identify silk when you’re buying. Many shopkeepers are refined con men who’ll sniff out your lack of knowledge and rob you accordingly.

The City of Temples – Places to visit in Varanasi 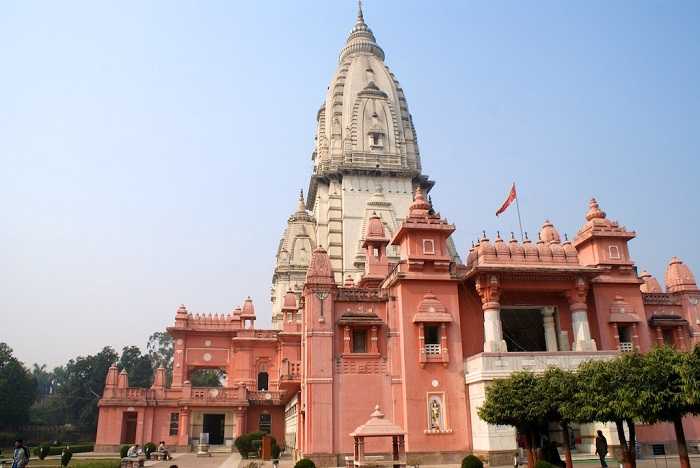 Varanasi is the ultimate temple hoppers’ paradise. Come, visit, pray and feel spiritually closer to your maker. The sheer number of temples in Varanasi are probably unrivaled by any other city that you can think of. There is a temple at every nook and cranny of the city. In the early morning and the evening, no matter which part of the city one lives in, the tolling of bells can be heard over the hubbub of the Holy town. The main Hindu temples that any visitor to Kashi should pay a visit to are :

The Kashi Vishwanath Temple (Godowlia): The temple that Banaras is famous for, is one of the most elaborate temples of Mahadev worship in the country, including the Jyotirlinga of Lord Shiva which is believed to be more powerful than any other Vishwanath Jyotirlinga. This is definitely one of the places to visit in Varanasi.

The New Vishwanath Temple (Banaras Hindu University Campus): The new Vishwanath Temple, or Birla Temple was built following the architecture of the old temple. It is located in the Campus and was planned by Pandit Madan Mohan Malaviya and is open to people of all castes and religions.

Bharat Mata Temple: This is the only shrine in the country dedicated to the Goddess who is believed to be the Guardian Angel of our nation. Located in the Mahatma Gandhi Kashi Vidyapeeth Campus, the main sanctum has a relief map of India cut out in marble rather than the customary Gods and Goddesses.

Baba Keenaram Ashram: Headquarters of the famous Aghori saint Baba Keenaram, this is one of those places that has a bunch of stories associated with it, and is visited by a lot of enthusiasts throughout the year.

Unless one savours the culinary treats of Banaras, a trip is incomplete. Food is a quintessential part of the Varanasi’s culture. Being frequented by hundreds of thousands of foreign tourists throughout the year, the city’s cuisine is a spin-off between the new and the old, the modern and the old-fashioned. Here are a few handpicked locations and special treats to tickle your taste buds while you’re in Varanasi. 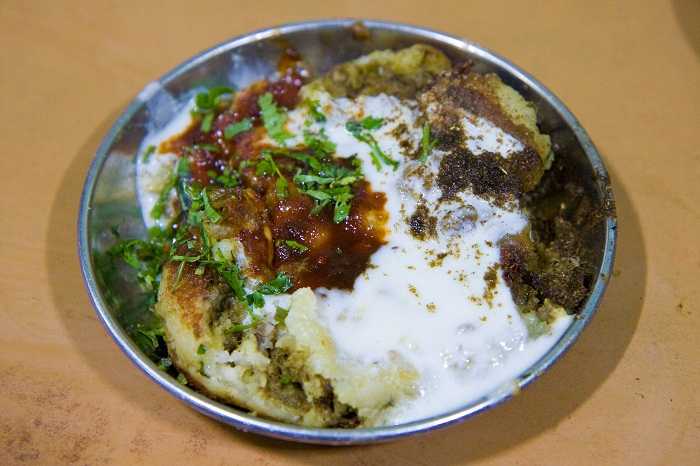 Pizzeria Vaatika is that beautiful riverside cafe that serves up a storm and delights customers every single time! Sit amidst the cool breeze and sip their coolers and order their lovely pizza with the bustle of the lively ghat at your heels. This, I promise, is an experience to remember.

Banarasi chai is a force to reckon with. But wait until you’ve sipped these drops of heaven at Kashi Tea Stall, Assi Ghat.With the regular ginger chai, there exist many other varieties that will simply blow your mind. Try the Lemon tea and you’ll be a fan for life!

Thandai is a special cooling drink that is a favourite treat in North India. Banarasi Thandai is in a league of its own. Prepared with melon seeds, cream, milk, rose petals, saafron, almonds, sugar, cashew and saunf, this drink is something you shouldn’t leave Varanasi without trying! Thandai in Banaras is also available with a dose of bhang, if you’re up for trying. Bhang consists of dried leaves and buds of the female cannabis plant and is consumed lovingly in “Bhole Baba ki nagri“! Baba Thandai and Thandai Ghar are two places to root for, at Godowlia Chowk. These are the places to visit in Varanasi if you’re craving for some amazing thandai.

Kashi Chat Bhandar is the one stop shop for chaat in Banaras. Try one plate of each of their offerings and you’ll part with your money lovingly. Dahi Chat, Tamatar Chat and Alu Chaat are treats to savour here. If you pay a visit to Sankat Mochan Temple, visit the chat stall that lies before the temple. The sheer spread of different varieties of chat at this stall are extremely luscious and attractive. Again, try each variety that the stall has on offer!

Want to try the famous Banarasi paan? Look no further. Keshav Taambul near Ravidas Gate offers one of the best paans in Banaras. One stop here, and you’ll be packing paans from Keshav for your folks back home!

Little balls of atta grilled over an open flame, served with baked brinjals, tomatoes and potatoes. These are served everywhere in the city, especially tasty near the Ganga ghats!

A wintertime specialty of Banaras, this creamy, buttery, milk foam is something to dig into if you’re in Varanasi during the cold months.

Banaras serves the best kachori sabzi as far as the dwellers can tell! The buttery goodness of the potato curry and the crispy kachoris will make your “subah-e-Banaras” an affair to remember!

At last, but so not the least, Banaras is the king of Jalebis. The jalebis or imartis ( a bigger cousin of the Jalebi) are a sweet treat too awesome to miss. Try them with rabri and you’ll want to come back to Banaras for this one!

Have we missed out on something that you’d love? Tell us here!

A post graduate in Journalism from Banaras Hindu University, food, travel and writing for pleasure keep her going. Besides being a closet chef and a bookworm; scribbling and Nature give her all the inspiration she needs. Follow her on Twitter at @peevi. She is currently a travel writer at Holidify, the Highest Rated Travel App in India.