The resonating sound of the conch shells elevates the synchronized music of the drums and bells with the chanting steadily rising in tempo and faith; the god is brought out of the temple. Lord Jagannath, the reincarnation of the notorious Lord Krishna resides in the temple town of Puri along the Bay of Bengal in Bhubaneswar, Orissa. According to a popular legend, Lord Jagannath desired to visit his birthplace Mathura once every year along with his brother Lord Balabhadra and sister Goddess Subhadra to show her Mathura on a chariot. 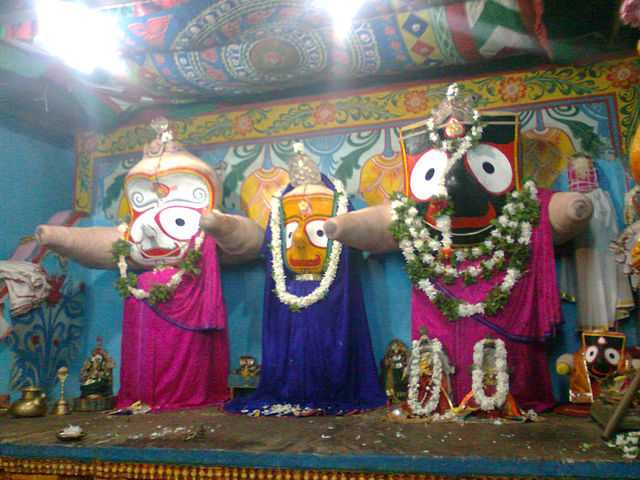 This Journey from the Jagannath Temple in Puri to Gundichi Devi Temple in Mathura is known as the Jagannath Puri Rath Yatra. Every year, the three deities are carried on chariots few miles away to Gundicha Temple on the second day of the new moon in the month of Ashada (June-July) according to the Hindu calendar. It is probably the only time when an idol is taken out of the temple in India. Puri Rath Yatra 2016 will start on the 6th of July. One of the significance of this Yatra is that people from all religions and faiths can see the deities and participate in the procession as they are not allowed to enter the temple on other days. For this, the Puri Rath Yatra sees 4-5 lakh pilgrims every year; Indians as well as foreigners flock in large numbers to get a glimpse of the idols in the chariot. It is believed that those who manage to get a glimpse of the idols will have a prosperous year ahead. 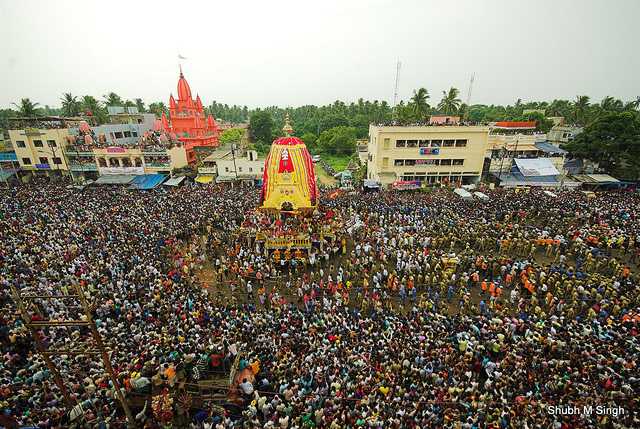 People gathered at Jagannath Temple, Puri for the procession (Source)

Prior to the Puri Rath Yatra, the three idols are given a ritualistic bath after which they are kept in isolation till the procession day as they become slightly discolored after the bath and are considered ill for that duration of time. On the day of the Yatra, people gather around the temple chanting and dancing while waiting for the King of Puri – who is a descendent of the Royal Family of Orissa, to bring the idols out of the temple. He is the only person who has complete authority over the Jagannath Temple. He sweeps the chariot with a gold handle broom and decorates the floor of the chariot with flowers before deeming it fit for the deities. He then sweeps the ground in front of the chariots and sprinkles sandalwood water around. This is a famous ritual of the Yatra called as the Chhera Pahara. This ritual signifies that everyone is equal in the eyes of the Lord. Placing the idols in the Chariots itself takes a couple of hours but the enthusiasm of the devotees only rises. 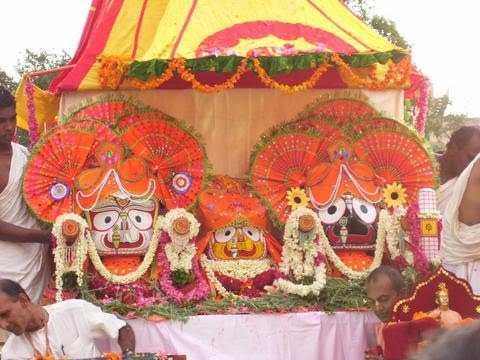 Idols being brought out from the temple (Source)

The chariots of Puri Rath Yatra 2016 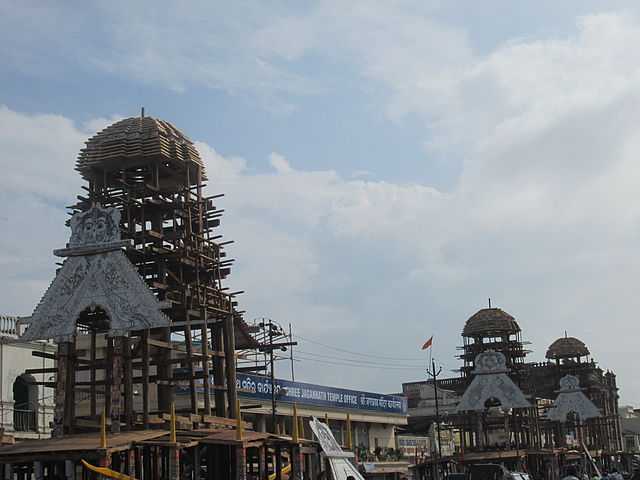 The Chariots being constructed 2 months prior to the Yatra (Source)

The distance from Puri to Gundicha temple is roughly 3 km however due to the large amount of crowd, Puri Rath Yatra takes a couple hours to reach. Once reached, the deities reside at the temple for a period of nine days where pilgrims are allowed darshan before taking it back to Puri in the same way. The return journey is called the Bahuda Yatra. On the way back, the procession halts at the Mausi Maa Temple (their aunt’s abode) where the deities are served with Poda Pitha (a kind of a sweet pancake). It is a said to be a poor man’s food which was a favourite of Lord Jagannath. The Puri Rath Yatra is the oldest and the grandest festival to take place every year in India. It dates back to the Hindu Puranas, having mentions in the Skanda Puran, Brahma Puran and Padma Puran. Apart from the religious affair, this Puri Rath Yatra greatly signifies the feeling of brotherhood that is present among the people who gather here inspite of coming from different social structures and parts of the world. 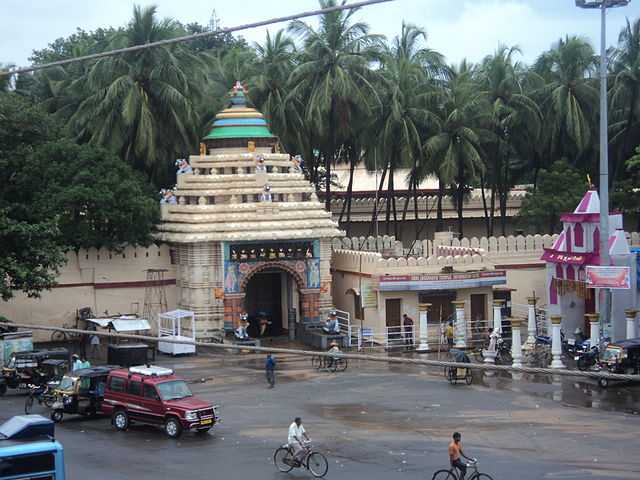 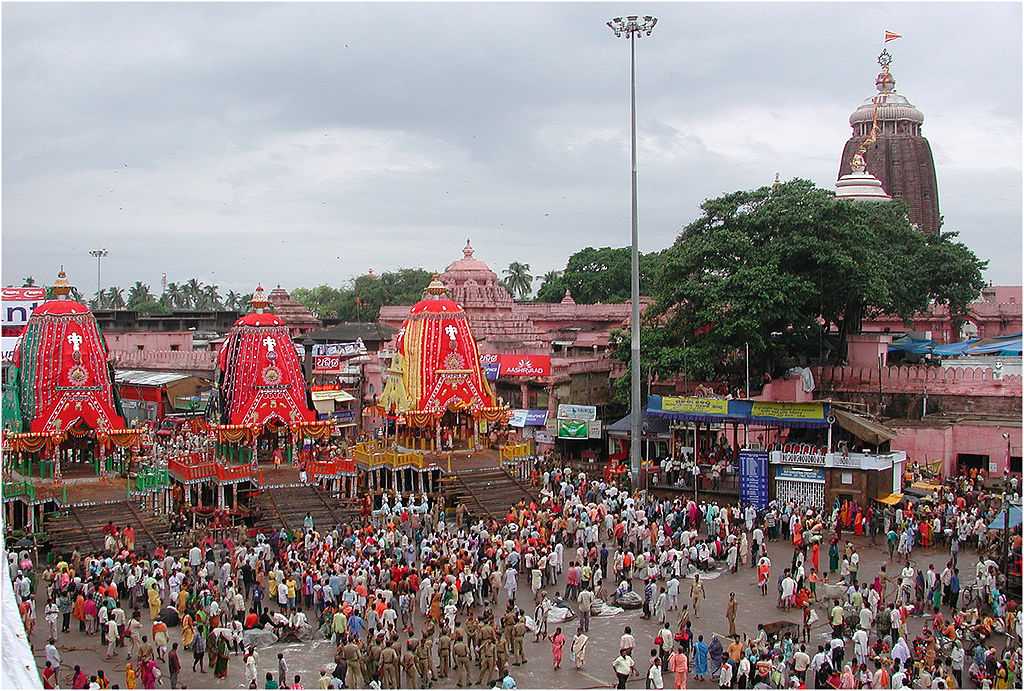 Trivia: History behind the name Juggernaut

When the British ruled India, they were fascinated by the energy and the enthusiasm of the Puri Rath Yatra festival that they referred it as Juggernaut meaning a huge vehicle which would crush anything that comes in its way because many pilgrims believe that dying under the Rath will attain them instant salvation. However, Juggernaut was derived from the word Jagannath which literally means, ‘The Lord of the World’.

Sneha, journalism graduate from Mumbai; on the way to be a business journalist stumbled into travel writing and couldn't get out of it. Writing is her eternal love and travel her lifelong companion. She is also a frequent travel blogger for Holidify, the Highest Rated Travel App in India.