Coming from Chennai, Auroville is probably the closest you can get, to get away from the city (which is probably why, it was my first non-adult supervised trip). But, physical distance apart, Auroville comes pretty close to home no matter where you’re from. It’s a fact you learn to accept without question as you roam the wide, nearly empty roads by foot, cycle, or scooter—pretty much everyone is an outsider, but everyone finds a way to belong. Auroville, about 150 kilometres from Chennai, Tamil Nadu and 10 kilometres from the state of Pondicherry was started as a large-scale project to realise the dream of human unity. As a testament to that, you see the smiling faces of people of all races, skin colours and ages, speaking languages from Tamil to French to Italian, who’ve made the place their home. You also find people who’ve realised their own dreams. I’ve personally met and heard of people who went from working IT jobs to becoming organic farmers, people who settled down there to get away from their prior lives, and people who’ve fallen in love in and with Auroville. I guarantee you it’ll happen to you too, whether you stay for a few days or a few months. The easiest way to escape into Auroville is through Chennai or Pondicherry, since the place doesn’t have its own railway station or airport. I took a public bus from Thiruvanmiyur and then an auto from the main road to the inner part of the town. Totally it cost me less than Rs. 300. There are also Volvo buses, which start from Koyambedu bus station and make several stops in Chennai city. You can book a cab if you’re feeling richer. Or if you have your own car, there’s nothing better than driving down and looking out for the ‘scenic’ ECR Highway, which seems to begin only after you’ve reached wherever you have to go. Similarly, a bus ride from Pondicherry should take you under an hour.

As soon as I reached (a little later than lunchtime), my friend and I made our first stop at Tanto’s, which is conveniently on the Auroville main road so you don’t miss it (and trust me, you shouldn’t). The owner is the sweetest Italian man and I swear by their pizzas. For the amount I go on about them, I should get paid for advertising—I’d even suggest you go to Auroville, just for Tanto’s.

But since there’s more to the place than great pizza, we set out to find cycles so we could explore. Ask around and someone will always be happy to direct you to a place that rents cycles.

If none of the cycles suit your fancy, you can rent a scooter. But if you can’t ride one, or like me, you fail miserably at learning to, you’ll have to wait until they can get you a ride you like. To pass time you can always have a long chat with the numerous shopkeepers. They’ll start off, coaxing you to come in and buy their goods—in a place with a population of about 2500, it’s easy to know who’s new. Soon enough though, you’ll know where they’re from (mostly Kashmir), they’ll know what you do, and you’ll share life stories till you’re on first name basis and greet each other with big grins of familiarity every time you ride by. 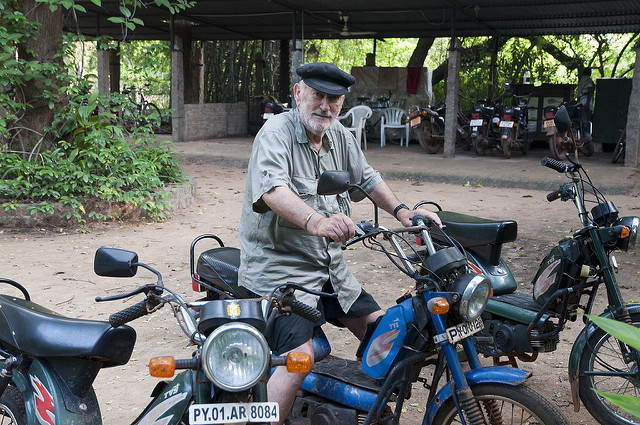 If you’re as lucky as me to have a friend with a house in Auroville, there’s nowhere better to stay. Very few people actually own houses there because you have property rights only as long as you’re alive. Once you’re gone, it goes back to the state, rather than down the family line. Other options are to stay in youth hostels, guesthouses or in a hotel nearby. Most of the organic farmers are happy to put you up if you work with them. Simply put, the more productive things you have to do in Auroville, the easier it is to get a place to stay there.

Most people go to Auroville with some business—to intern with various handicraft artists, to volunteer, to learn and practice sustainable ways of life, to research, or to work at the numerous organic farms that form the green belt that surrounds the town. But, there’s a lot to do even if you don’t plan to adopt the Auroville way of life. The main attraction at Auroville is the Matri Mandir, an awe striking golden globe dedicated to prayer and meditation. I personally like to just stare at it (mostly with my jaws dropped) from the outside, but for more serious seekers of peace, you can book sessions and go to the inner sanctum and revel in the silence that circulates till it’s in you.

There’s also the beach—a cleaner and less rocky mix of Chennai and Pondicherry beaches—which is more my meditation scene than a quiet room. There are workshops and film screenings that you can go to. There’s also a solar kitchen, which cooks food using only solar or other sustainable energy and organic products—so it’s as healthy as healthy gets. Organic farms like Solitude also serve food if you inform them you’re coming.

You could also just read a book under the shade of a tree or stop a fellow Aurovillian just to say hi—you’ll know them by the typical bright, patterned loose clothes everyone wears to beat the heat and keep up spirits. While everyone seems to always have somewhere to go, they all have time to get to know you and build the Auroville community. You could even just go exploring and know that anywhere you want to go and however lost you get, everywhere is just a cycle ride away. This entry was submitted for Holidify’s Travelogue Writing Contest, Wanderlust in association with Mood Indigo,    IIT-B. The content and pictures may not be used without prior permission of the author.